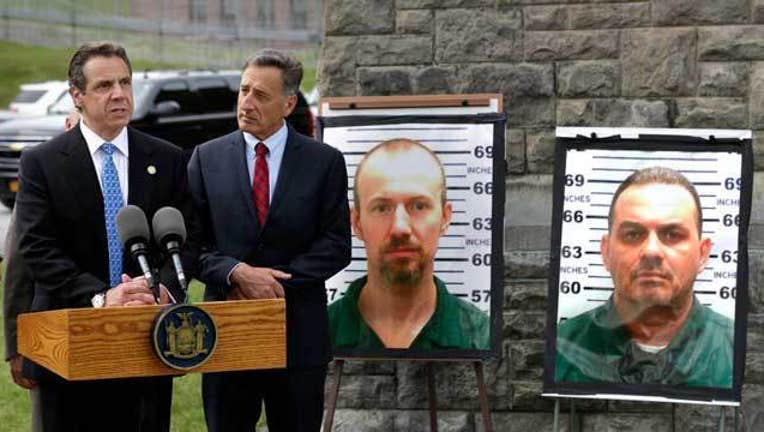 DANNEMORA, N.Y. (AP) — Squads of law enforcement officers on Friday began a seventh day of trying to track down two murderers who escaped from a maximum-security prison in northern New York and could be hiding out in swampy terrain swarming with blood-sucking insects.

Armed officers in body armor boarded New York state prison system buses soon after dawn in the village of Dannemora, where David Sweat and Richard Matt used power tools to cut their way out of their neighboring cells last weekend.

Meanwhile, suspicions swirled around a female prison employee believed to have had a role in the escape last weekend.

The hundreds of state, federal and local officers spent Thursday searching a swampy patch of woods just east of Dannemora after investigators received tips that the convicts were in the area. Tracking dogs had picked up the scent in the morning.

State Route 374, the main road leading into Dannemora, remained closed for a second day Friday, as did the local school district.

New York Gov. Andrew Cuomo said the law will come down hard on any prison system employee who crosses the line.

"If you do it, you will be convicted, and then you'll be on the other side of the prison that you've been policing, and that is not a pleasant place to be," Cuomo said. He also said investigators are "talking to several people who may have facilitated the escape."

Investigators believe the prison employee had agreed to be the getaway driver, but she never showed up, a person close to the case told The Associated Press.

Sweat, 34, and Matt, 48, cut through steel and bricks and crawled through an underground steam pipe. They emerged from a manhole outside the 40-foot walls of the maximum-security Clinton Correctional Facility, about 20 miles south of the Canadian border, and were discovered missing early Saturday, authorities said.

The person close to the investigation said authorities believe Joyce Mitchell — an instructor at the prison tailor shop, where the two convicts worked — had befriended the men and was supposed to pick them up Saturday morning.

The person said that was one reason the manhunt was focused so close to the prison. The person was not authorized to discuss the investigation and spoke on condition of anonymity.

Mitchell has not been charged. Her son Tobey Mitchell told NBC on Wednesday that she checked herself into a hospital with chest pains Saturday. He said she would not have helped the inmates escape.

A longtime neighbor also was stunned by the suspicions swirling around Mitchell.

"I just can't believe she'd do something so stupid," neighbor Sharon Currier said. She said Mitchell is always happy to help people, but she's "not somebody who's off the wall."

She said Mitchell is a former town tax collector in Dickinson, a community near Dannemora. Quick with a laugh and skilled at sewing, she has worked for five or more years at the prison, where her husband also works, Currier said.

As police using dogs and helicopters blocked off a main road, residents in Dannemora received automated calls Thursday warning them to lock their doors, close their windows and leave outside lights on.

But Cuomo noted that authorities are still uncertain where the inmates might be hiding. "Look, they could either be four miles from the prison or they could be in Mexico. Right? So you just don't know," he said.

State Police said they bolstered the force looking for the fugitives to 500 officers from 450 a day earlier.

Sheriff David Favro said there had been no reports of stolen or abandoned vehicles, break-ins or abductions.

Jennifer Hilchey-Reyell, who lives on the edge of the search area, heard low-flying helicopters all night and watched state police SUVs race by all day. She said she now carries a .22-caliber gun and relies also on her pit bull, Layla.

"My dog will slow them down, and that's all I need," she said.

Matt was serving 25 years to life for the 1997 kidnap, torture and hacksaw dismemberment of Matt's 76-year-old former boss, whose body was found in pieces in a river.

Matt and an accomplice stuffed William Rickerson in a car trunk in his pajamas and drove around with him for 27 hours because he wouldn't tell them the location of large sums of money he was believed to have. According to testimony, Matt snapped Rickerson's neck with his bare hands.

After the killing, Matt fled to Mexico, where he killed a man outside a bar.

Sweat was doing life without parole for his part in the 2002 killing of sheriff's Deputy Kevin Tarsia, who was shot 15 times and run over after discovering Sweat and two accomplices transferring stolen guns between vehicles.