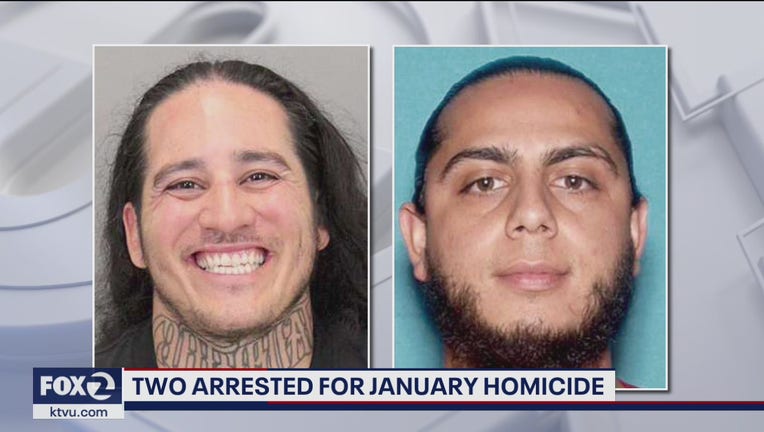 Marcus Sloan Pardohendry, 33, of San Jose, and Richard Alexis Torres, 28, of San Jose were arrested on suspicion of murder.

SAN JOSE, Calif. - Police on Thursday took a second suspect into custody in connection with a homicide that occurred in January in San Jose.

Marcus Sloan Pardohendry, 33, of San Jose, was taken into custody Thursday at around 3:08 a.m., according to the San Jose Police Department. Richard Alexis Torres, 28, of San Jose, was previously arrested Tuesday on suspicion of murder, police said.

On Jan. 15 at 10:19 p.m., officers responded to a person shot at Clayton Road and Squeri Drive and located San Jose resident Richard Huy Nguyen, 26, suffering from at least one gunshot wound.

Nguyen was pronounced dead at the scene.

On Tuesday, police located Torres in Santa Clara. Police said Torres did not comply with officers' commands, and a San Jose police K9 was used to take the suspect into custody. Torres was transported to the hospital for medical treatment and was paper booked into the Santa Clara County Jail on suspicion of murder, police said.

As of Thursday, Torres remained in custody at the hospital and was going to be booked into the jail once he was medically released. On Wednesday at 3 p.m., officers located Pardohendry at a residence in the 2500 block of Vista Verde Drive in San Jose.

Police said Pardohendry barricaded himself inside the residence and ultimately exited the residence Thursday morning at 3:08 a.m. He did not comply with officers' commands, so officers discharged a projective impact weapon at him twice and used a K9 to take him into custody. Pardohendry was taken to a hospital for treatment and will ultimately be arrested on suspicion of murder, police said.