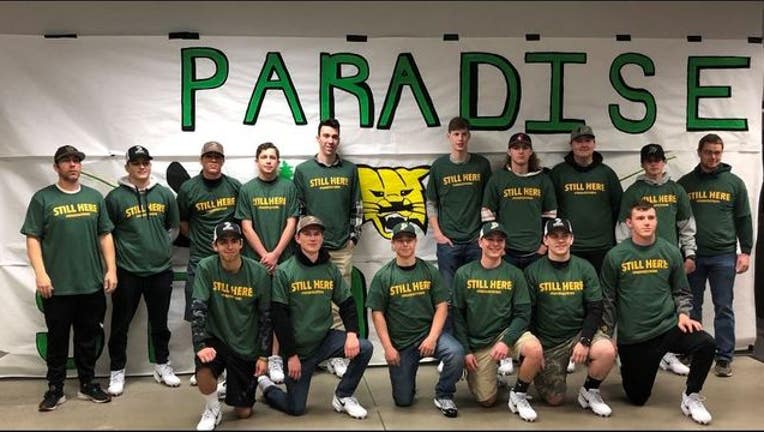 OAKLAND, Calif. - Almost all of the players on the Paradise High School baseball team lost everything they owned in the deadly Camp Fire that completely wiped out the small mountain town late last year.

But the wildfire did not take player’s spirit or their love of the game.

And on Saturday, they will be rewarded mightily for the heartache and hardship that the California’s most devastating wildfire delivered last November.

It will be a doubleheader that day as the Paradise team steps up to the plate following the Dante Benedetti Baseball Classic, where St. Ignatius College Preparatory will take on Sacred Heart Cathedral Preparatory, both private high schools in San Francisco.

“It’s one of those things where they are just awestruck,’’ said the school’s athletic director Anne Stearns. “Any time we can take a moment to forget the situation that we are in, it’s great for our students. We are just very, very thankful for what we are getting.”

Giants executives said the team is honored to host the high school team from Paradise.

“We understand that these kids, their families and the entire community of Paradise are going through an exceedingly difficult time as they recover from this devastating fire,” said Staci Slaughter, the team's executive vice president of communications. “We hope that the game of baseball and this experience will help lift the spirits of everyone in Paradise as they rebuild.”

Although most of Paradise High School miraculously was untouched by flames, the baseball field and some athletic storage facilities were damaged by the fire, and the school was then closed because of surrounding hazards, such as falling trees.

“We lost most of our equipment, ‘’ Stearns said. “We have a field but we can’t play there because of all the devastation around it.” The fire also forced out more than 50 percent of the school’s students who have now relocated “all over the United States,’’ Stearns said.

The 480 teens who remain as Paradise High students now attend classes in Chico, a nearby city where the baseball team is practicing leading up to this weekend’s big game.

Stearns said players are most excited about the chance to be in a bullpen, hit in the batting cages, trek through the stadium’s tunnel onto the field, and stand in the same spots where their baseball idols made plays that led the Giants to three World Series wins.

Well, Jeter was never a Giant, but we’ll let that slide.

Both games Saturday are free and open to the public. Fans attending the Paradise game will receive a “Paradise Strong” T-shirt while they last.