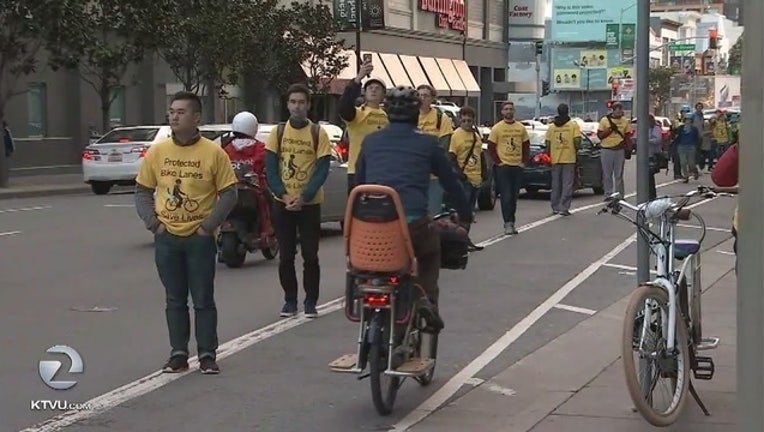 On Tuesday, San Francisco Municipal Transportation Agency board unanimously approved the 5th Street Improvement Project. Mayor London Breed tweeted the project will bring safety improvements to the high-injury corridor as a quick short-term solution, while long term changes are being made.

The protected bike lanes will stretch along SoMa's 5th Street from Market Street to Townsend Street near Oracle Park. According to SFMTA, the improvements include; upgraded bicycle facilities, transit stop improvements, pedestrian safety treatments such as "pedestrian-scale lighting" that will improve feelings of safety while walking at night, and improved parking and loading zones.

SFMTA includes 5th Street in their "High-Injury Network", which is the 13% of city streets that accounts for 75% of the city's severe and fatal traffic injuries.

Already this year, the pedestrian advocacy group, Walk SF, has counted 15 fatal incidents involving pedestrians or cyclists who were struck by vehicles, which is more than double what it was at the same time last year.

One of their biggest concerns is that the SoMa neighborhood is home to one of the largest senior populations per capita in San Francisco and has a high number of seniors with disabilities. They touted the importance of having mid-block crossings that make it possible and more comfortable to cross long blocks.

"We're tired of SoMa streets being treated as freeways," said Courtney McDonald, a legislative aide for District 6 Supervisor Matt Haney. Haney's district includes SoMa and the Tenderloin, where a disproportionate amount of collisions have taken place.

"Right now, Fifth Street consists of four lanes of fast-moving traffic sandwiched between freeway on-ramps and off-ramps — a high injury corridor. It is also one of the most direct bicycle routes to Caltrain, forcing people riding to and from the station to either risk their lives, or take a significant detour," writes SF Bicycle Coalition on their website.

The Coalition thanked Matt Haney for his support with getting the project approved. They also endorsed Breed in her bid for re-election this November, saying she pushed SFMTA "to do more and to do it faster." They tweeted that they'd like to see her implement 20 miles of protected bike lanes in two years.

According to SFMTA's timeline on their website, construction of these improvements is slated for as soon as fall 2019.