Evander Kane's wife, Ana, made the claims against her husband on social media over the weekend. The NHL player responded in his own post, denying this ever happened.

SAN JOSE, Calif. - San Jose Sharks forward Evander Kane denied allegations his wife made on social media that he bet on NHL games, including against his own team.

Kane responded Sunday morning to allegations made the previous day from the Instagram account of his wife, Anna.

"I have NEVER gambled/bet on Hockey, NEVER gambled/bet on a Sharks game, NEVER gambled/bet on any of my games and NEVER thrown a hockey game," he wrote on Twitter. "The facts are I personally had my best season of the my career last year and was the most consistent I’ve been throughout any season, I’m proud of that. I love the game of Hockey and would never do any of what was alleged. I look forward to cooperating fully with the league’s investigation, having my name cleared and looking forward to this upcoming season."

The NHL said Saturday night that it was made aware of the social media posts from Anna Kane and plans to conduct a full investigation.

Anna Kane wrote: "How does the NHL let a compulsive gambling addict still play when he’s obviously throwing games to win money? Hmm maybe someone needs to address this." 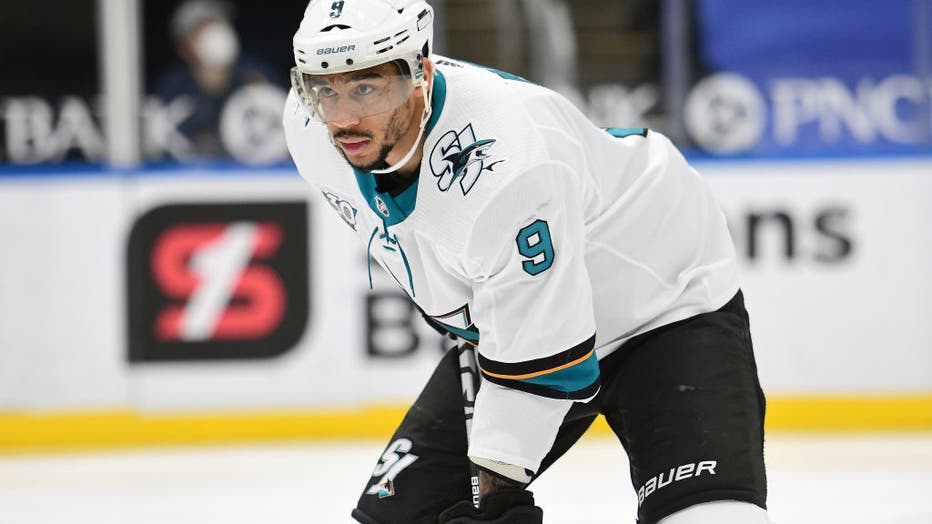 In a separate post, Anna Kane accused her husband of spending lavishly partying in Europe while asking her to sell her wedding ring to survive and wrote about not being able to afford baby formula for their child.

Evander Kane said the two are in the process of getting a divorce and called Anna Kane "mentally unwell."

"I love my daughter," he wrote. "I will and always have taken care of my daughter in every way possible. I have always made sure her mother has had everything she’s needed and more. I have tried to de-escalate our divorce issues and be as civil and calm as anyone in this position could. I have tried to set up FaceTime calls but not every day as I would like to because of being restricted by her mom. She has refused me to see her and had unfortunately tried to use my daughter as leverage. I will continue to always take care of my family, that goes without question."

The NHL said: "The integrity of our game is paramount and the League takes these allegations very seriously."

A team spokesman wrote in an email to The Associated Press that: "The San Jose Sharks have been in contact today with the National Hockey League about the serious allegations made against Evander Kane. We support a full and transparent investigation into the situation to maintain the integrity of the game and consistency with our team values."

Kane’s gambling history and finances have been public knowledge for some time. A Las Vegas Strip casino sued Kane in 2019, alleging he failed to repay a $500,000 gambling debt racked up during a playoff series against the Golden Knights.

Since the Supreme Court paved the way for legalized sports gambling in the U.S. and more states have adopted it, the NHL has embraced the possibilities and made several partnerships with sportsbooks and other betting organizations.

Reached by email before the league’s announcement, Deputy Commissioner Bill Daly said only a statement would be coming. The league said it would not make any further comments at this time.

Kane, 29, is three seasons into a $49 million, seven-year contract. He’s with his third organization after being drafted by and debuting with Atlanta/Winnipeg and a stint in Buffalo. According to Capfriendly, which charts hockey salaries, he has made just under $56 million during his NHL career.