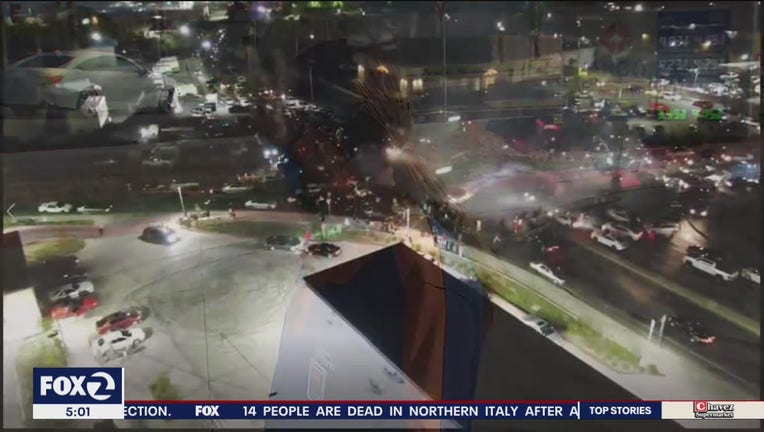 ANTIOCH, Calif. - Last weekend, hundreds of drivers besieged three East Bay cities, and in so doing, took over intersections to spin their vehicles in high-velocity circles.

It’s an ongoing Bay Area problem, and street sideshows are seemingly getting worse.

"I don’t know why my city was on that list. But they’re gonna regret being on the list," said Antioch Mayor Lamar Thorpe, alluding to the revelers who took part in the sideshow.

"This is ruining people's tax dollars, people that have to go to work the next day," said Antioch resident Jeremiah Rafike.

Officials are using a two-pronged approach to combat this crime. They’re employing proactive police details that are on the street before drivers arrive. And after the fact, vehicles are towed and impounded for 30-days. The police citation costs $300, and another $3,000 for an owner to get their vehicle out.

"If you come to Antioch, your cars going to be impounded and you’re going to be issued a citation," said Thorpe.

The problem is that sideshow participants aren’t targeting one city. In addition to Anitioch, Oakley and Brentwood also saw sideshows last weekend.

The events, which attract hundreds of spectators, happen around the Bay Area, despite similar punitive risks in many jurisdictions.

"They’re still continuing to do it. So I don’t believe that this is actually working to a certain point," said Russell Davis, a spokesman for the Santa Clara County Sheriff’s Office.

Experts said an underlying lack of impulse control, especially in younger people, is coupled with a misguided belief they won’t get caught.

"Their cortex is not fully developed. Their norms for what’s good and bad behavior are not necessarily fully developed. And they’re very much influenced by their peer group," said Dr. Thomas Plante, a Santa Clara University psychologist. Added Mayor Thorpe, "We’re gonna do our best to remain proactive and make it impossible for folks to do sideshows."

Antioch city officials are installing raised pavement markers at three-intersections as a deterrent to sideshows. If successful, officials believe it could become a permanent fixture on Antioch streets and beyond.