A van was traveling southbound on Second Avenue when it crashed into the outdoor dining area of the Crawfish Bar.

NEW YORK - The driver of a van that crashed into an outdoor dining area, collided with another vehicle and slammed into a fruit stand was arrested Friday in Manhattan.

The van was traveling southbound on Second Avenue at about 8:40 a.m. when it crashed into the outdoor dining area of the Crawfish Bar, said police. The driver continued on and collided with a black Toyota Camry at East 50th Street and Second Avenue. The van then crashed, again, at East 49th Street where it struck the fruit stand and injured seven people.

A car slammed into an outdooring dining area at East 50th Street and Second Avenue in Manhattan.

The driver, 66, was arrested on suspicion of driving under the influence, said police. 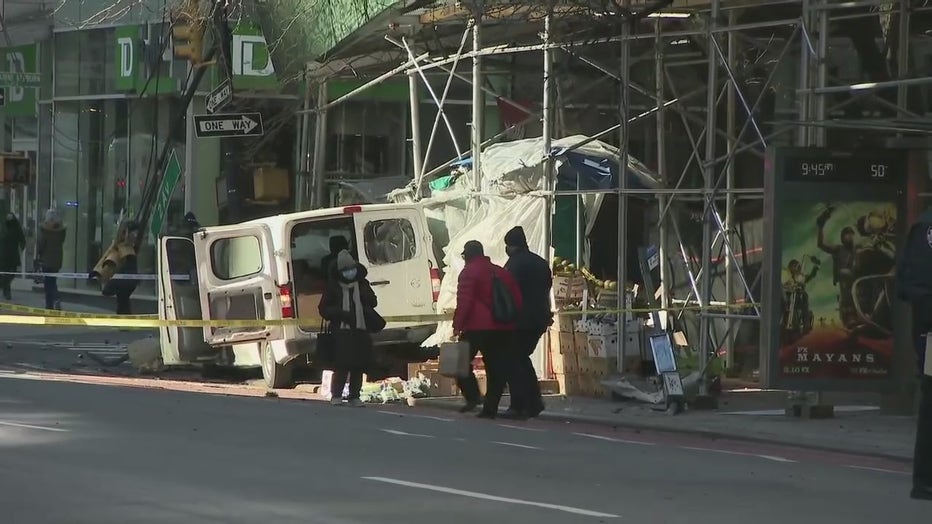 A white van appears to have been involved in a collision that sent a black sedan crashing into an outdoor dining area in Manhattan. (FOX 5 NY)

Video from the scene shows airbags deployed inside the black vehicle. The van appears to have significant damage. The woodshed used for the outdoor dining area, lampost, and a garbage can also be seen strewn onto the sidewalk and street.