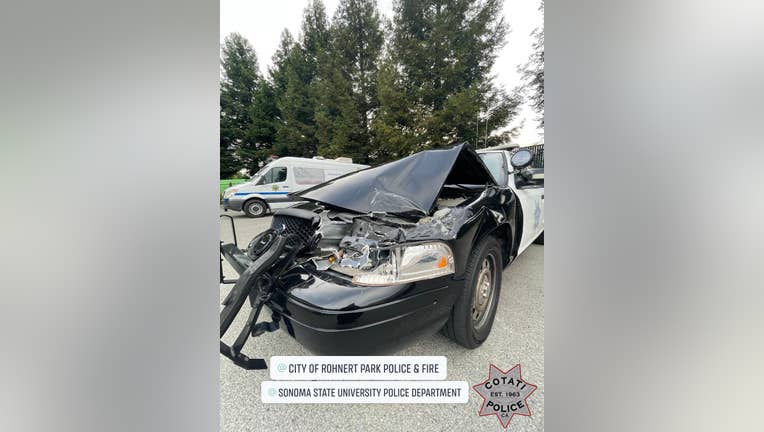 The chase began when a man, who was attempting to pick up his child in a custody exchange, came into the Cotati Police Department saying the mother of the child was driving drunk, officials said.

The woman, named as Dorfer by police, was seen in her green Lexus in the parking lot of the police department. A sergeant ordered Dorfer to stop, but she fled in the Lexus, officials said.

A second sergeant saw the Lexus on W. Sierra Ave and tried to pull over Dorfer with sirens, but she didn't stop, police said. Instead, Dorfer put her hand out her car window and displayed her middle finger, the sergeant said.

Then, Dorfer allegedly reversed and rammed into a police car attempting to pull her over. The impact caused major damage to the car and minor injuries to the sergeant.

Police said Dorfer fled the scene again after ramming into the patrol car, and was driving at dangerous speeds, almost hitting a motorcyclist. Dorfer allegedly collided with two cars in Rohnert Park, and the pursuit was deemed too risky and terminated.

Dorfer’s Lexus was later found at a convenience store on E. Cotati Ave in Rohnert Park. Police said Dorfer ran in the store and drank a travel size bottle of hard liquor.

While taking Dorfer into custody, authorities said she fought them and allegedly bit one officer.

Police did not say where the child was during the chase.