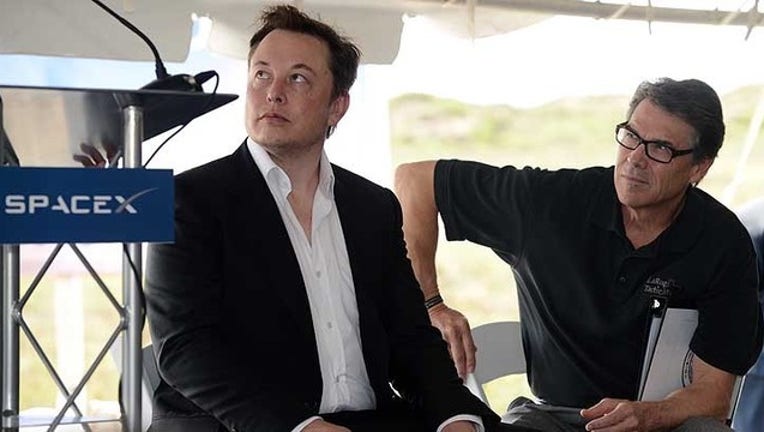 Musk's rocket-building company, SpaceX, announced Monday that it plans to build a 1-mile test track next to its headquarters in the Los Angeles suburb of Hawthorne and will hold a competition there next year to test designs for passenger-carrying Hyperloop pods.

It's the first time Musk's company has been directly involved in the Hyperloop project, although several private firms are pursuing research.

Suggested by Musk two years ago, the idea is to zoom passenger capsules through elevated tubes between Los Angeles and San Francisco at speeds of up to 750 mph. The concept pulls together several proven technologies: Capsules would float on a thin cushion of air and draw on magnetic attraction and solar power to zoom through a nearly airless tube. With little wind resistance, the capsules could reach the speed of sound and the 400-mile ride would take a half-hour.

The competition aims to attract independent and university engineering teams who will design and test half-scale models of the pods. The submission deadline is Sept. 15 and the competition is roughly scheduled for next June.

Online forms for those intending to compete are available at: www.Spacex.com/hyperloop.

"While we are not developing a commercial Hyperloop ourselves, we are interested in helping to accelerate development of a functional Hyperloop prototype," a statement on the site read.

There was no immediate word on the nature of the prize. Full rules and other details will be released in August.

Next January, entrants will meet for a design weekend at Texas A&M University. The designs will be presented before an evaluation panel composed mainly of engineers from SpaceX and Musk's luxury electric-car company, Tesla Motors, and university professors.

Private companies will be able to use the weekend to choose teams to sponsor and fund.

SpaceX said it also probably will build its own pod for demonstration purposes but its team won't be eligible to win the competition. The company also will have the final say on who actually gets to use the test track.

There's no word yet on the cost of that track.

Musk has suggested that building an actual Hyperloop system would cost $6 billion, although others suggest the figure will be much higher.

One company researching the concept is Hyperloop Technologies Inc., which has its world headquarters in Los Angeles. That company is working to raise $80 million needed to build a 5-mile test track.