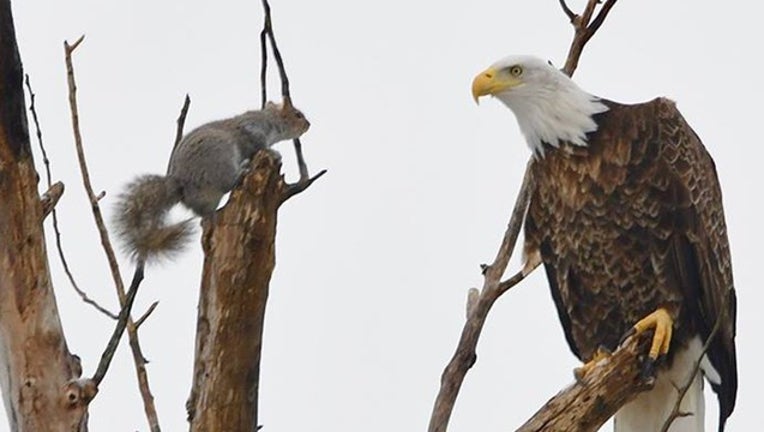 LINCOLN, Maine (FOX 35 ORLANDO) - A nature photographer in Maine captured an epic staring contest between a bald eagle and a squirrel in a photo that has gone viral.

Roger Stevens Jr. left his house on Monday, camera in hand. As he was driving home from McDonald's, he noticed a bald eagle in a tree near a Rite Aid store.

When he got out of his car to snap a picture, he saw a gray squirrel appear. Normally, a squirrel would be an easy meal for a bald eagle, but this time was different.

In defiance, Stevens Jr. said the squirrel stood strong, staring into the eyes of its enemy. The staring match continued for at least 10 minutes as the squirrel kept a safe distance the whole time.

Stevens Jr. watched the animal showdown. He said the squirrel would often duck into a safer spot on the tree but kept popping right back out, determined to get rid of the predator.

After a while, Stevens Jr. said the eagle gave up and flew away.

Stevens Jr. tells Fox 35 he's working on his 8th nature book about eagles where the viral photo will appear.