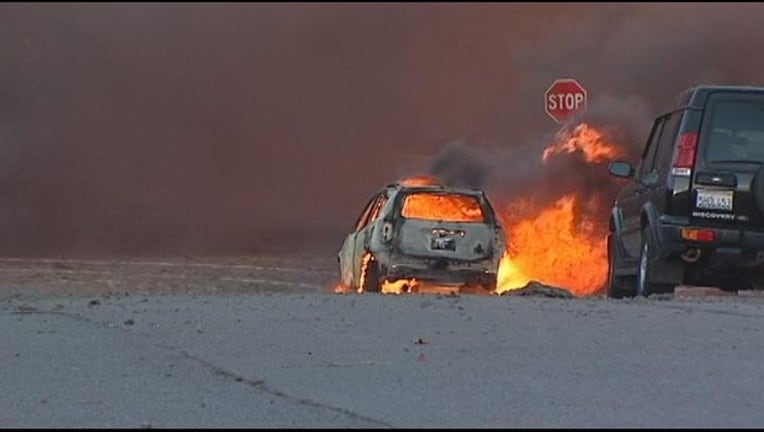 California Public Utilities Commission President Michael Picker said he would ask the commission's staff to study "the culture of safety" and the structure of the utility, which he noted currently has its gas and electricity operations under a single board and CEO. PG&E is one of the country's largest power utilities with 9.7 million gas and electric customers.

The Associated Press obtained Picker's prepared statement ahead of a commission meeting Thursday, where the panel is expected to vote on a record $1.6 billion penalty for the 2010 PG&E gas pipeline explosion in a San Francisco suburb.

PG&E officials said Wednesday evening that the utility has redoubled safety training, changed top executives and carried out extensive safety improvements in its natural-gas system. The company has carried out nine of 12 specific safety upgrades recommended by federal transportation officials, and it is working on the remaining three, utility spokesman Keith Stephens said.

"We look forward to hearing any comments from President Picker and we welcome an ongoing discussion focused on safety," Stephens said in an email. "Since the 2010 explosion of our natural gas transmission pipeline in San Bruno, we have worked hard to do the right thing for the victims, their families and the community of San Bruno. We are deeply sorry for this tragic event and we have dedicated ourselves to re-earning the trust of our customers and the communities we serve. The lessons of this tragic event will not be forgotten."

"We've made tremendous progress but we have more to do and we are committed to doing it right," he said.

Picker, in his statement, cited what he said were rising numbers of state safety citations against PG&E's natural gas operations and said it appeared the utility, with $1.6 billion in earnings in 2014, was able to shrug off financial penalties.

"If, indeed, PG&E is failing to establish a safety culture, and we continue to see more accidents and violations of safety rules, what are our tools?" Picker asked.

Picker did not elaborate what actions the commission could take if it concluded that PG&E was too big to operate safely. Another state official said the staff would study whether the commission could split the company's gas and electric operations, if it chose to do so. The official spoke on condition of anonymity because the official was not authorized to publicly speak about potential next steps to address the utility's problems.

"Is the organization simply too large — spread across a sizeable portion of a large state, and encompassing diverse functions such as both gas transmission and gas distribution, as well as electric service — to succeed at safety?" Picker said in his statement.

The company has "separate gas and electric businesses under the oversight of the PG&E board of directors, and with the same CEO and senior executive team over both," noted Picker, a former energy adviser to Gov. Jerry Brown who put him in charge of the utilities panel this year amid federal and state criminal investigations into the commission's back-channel dealings with PG&E.

Picker would ask commission lawyers and other staff to open a review of that question and other possible measures against PG&E, including possible recovery of corporate bonuses to executives, his statement said.

The commission is slated to decide Thursday morning between the proposed $1.6 billion penalty and another proposal with a lower penalty, in punishment for the San Bruno blast.

The National Transportation Safety Board faulted repeated safety failures by PG&E, as well as lax regulation by the commission, in the 2010 pipeline blast.

Picker cited other government safety citations against the utility's operations, including a 2012 accident that killed a contractor.

San Bruno city officials have kept pressure on both utility regulators and PG&E in the years since. Legal actions taken by San Bruno led to the release of 65,000 emails between the utility and regulators this year and last. The emails included exchanges that showed commission staffers and members coordinating to find administrative officials favorable to PG&E on rate cases, among other private discussions of regulatory matters.

Another email described Picker's predecessor as chief utility regulator, Michael Peavey, pressing a PG&E executive over dinner both for $1 million in donations to a ballot initiative backed by Brown and $100,000 to help pay for a commission gala.

The U.S. attorney's office and state attorney's general office have since informed PG&E they are investigating possible corruption between the commission and the utility, PG&E says. The utility said the executives accused of improper dealings no longer work with the utility.

PG&E says it has devoted $2.8 billion to natural gas safety measures since the San Bruno blast.

Picker, in his prepared statement, alleged PG&E is so big that shareholders and executives alike have been able to disregard the state's penalties. PG&E share prices actually increased 3 percent this year after Picker proposed the $1.6 billion penalty, $200,000 million higher than the earlier proposal, he said.

One of the San Bruno survivors, John P. McGlothlin, had been cooking dinner with his wife when he heard what he thought was a plane coming apart overhead. "I looked over my shoulder and there was a fireball. Literally, the fireball looked like it was in our backyard," said McGlothlin. The McGlothlins ran to safety, although they knew families that lost loved ones.

McGlothlin said PG&E television commercials and full-page newspaper ads describing the company's care for Californians only make him skeptical that the utility understood the gravity of safety problems. "It looks like at some point they decided to spend the money on what I'll call propaganda, rather than action," he said.