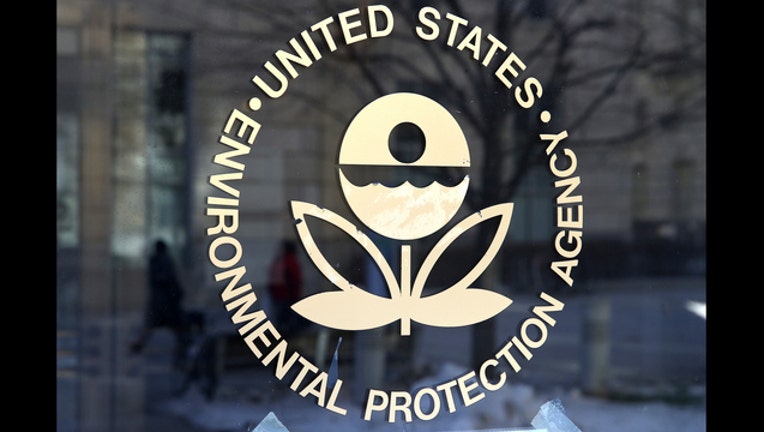 The U.S. Environmental Protection Agency's (EPA) logo is displayed on a door at its headquarters on March 16, 2017 in Washington, DC. U.S. (Photo by Justin Sullivan/Getty Images)

SAN FRANCISCO (BCN) - Fourteen states led by California and a coalition of public health and conservation groups have sued the U.S. Environmental Protection Agency in federal court in San Francisco for failing to designate the smoggiest areas of the nation.

The two lawsuits alleging violations of the U.S. Clean Air Act were filed by the states on Tuesday and by groups including the American Lung Association and the Sierra Club on Monday.

They contend the EPA has failed to meet an Oct. 1 deadline for designating geographic areas with ground-level ozone levels above the national standards set by the agency in 2015.

Under the Clean Air Act, the designations trigger a requirement for states to take measures to reduce harmful ozone, such compelling new factories and power plants to have state-of-the-art pollution controls.

"It is therefore imperative that the EPA implement these smog-reducing standards as mandated by the Clean Air Act," California Attorney General Xavier Becerra said in an announcement of the states' lawsuit.

The lawsuits claim the EPA has failed to provide a designation for areas suffering from ozone pollution including the San Francisco Bay Area, the Central Valley, Los Angeles and the New York City area.

The two cases, which are likely to be handled by the same not-yet-assigned federal judge in San Francisco, ask for a court order requiring the EPA to designate dangerous smog areas.

EPA spokeswoman Ernesta Jones said the agency has a policy of not commenting on pending litigation.

Ground-level ozone, or smog, is a hazy gas created when nitrous oxides and volatile organic compounds from car exhaust and factory smokestacks react with sunlight.

It inflames lungs and constricts breathing and can cause asthma attacks, damage lung tissue and aggravate heart conditions and emphysema. It can also harm plants, trees and crops.

The EPA is required by the federal law to revaluate pollution standards to protect public health and welfare every five years. In 2015, the agency revised its previous ozone limit of 75 parts per billion downward to 70 parts per billion.

The states were then required to submit recommended designations to the EPA, saying whether each area in their state has attained or not attained the standards or cannot be classified. The EPA is not required to accept the recommendations, but must announce a rejection in advance. Its deadline for announcing designations was Oct. 1.

On Nov. 7, the EPA announced it was designating a large number of areas as achieving attainment or being unclassified. But it made no "nonattainment" designations, saying instead that it "intends to address those areas in a future action."

As a result of the lack of designation, "many millions of people continue to suffer from unhealthy air, contrary to the Clean Air Act's fundamental mandates," the states' lawsuit says.

The American Lung Association lawsuit says that more than 100 million people of the nation's population of roughly 323 million live in areas that have not yet received a designation, including the Bay Area, the Central Valley and Los Angeles.

The states' lawsuit says the EPA predicted last year that achievement of the 2015 standard in California would save between 115 and 218 lives, prevent hundreds of hospital visits, and provide a $1.3 billion economic benefit in saved health care costs and avoided lost work days and school absences.

In addition to the American Lung Association and the Sierra Club, groups participating in the first lawsuit include American Public Health Association, the National Parks Conservation Association, the Environmental Defense Fund and the Natural Resources Defense Council, among others.