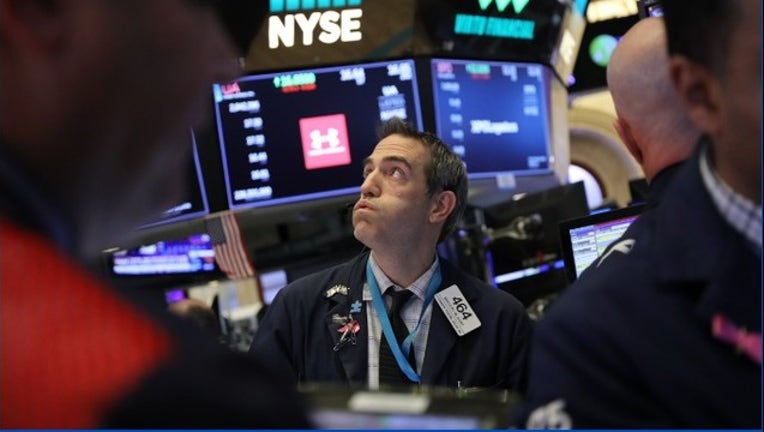 U.S. stocks fell on Wednesday after the Federal Reserve raised interest rates for the fourth time in 2018. (Photo by Spencer Platt/Getty Images)

NEW YORK (AP) - Stocks gave up a big rally and took a dive in afternoon trading Wednesday after the Federal Reserve raised interest rates again and signaled it's likely to keep raising them next year. The market finished at its lowest level since September 2017.

The U.S. central bank said it expects to increase interest rates at a slightly slower pace next year, and also said it isn't planning any changes in the gradual shrinking of its large bond portfolio. But investors appeared to hope the Fed would unveil a sharper slowdown in interest rate hikes and other credit tightening policies because economic growth is likely to slow down.

The Dow Jones Industrial Average swung from a gain of 381 points right before the Fed's decision was announced at 2 p.m. Eastern time to a closing loss of 351 points. The index is down almost 9 percent in December.

The rate increase, to a range of 2.25 percent to 2.5 percent, was the Fed's fourth this year. Its benchmark interest rate is at its highest point since 2008, which means higher borrowing costs for many consumers and businesses.

Bond prices rose, sending yields sharply lower. The yield on the 10-year Treasury note fell to 2.77 percent from 2.84 percent immediately before the Fed's announcement and 2.82 late Tuesday. That's a substantial move for that benchmark lending rate. Bonds yields are benchmarks for many kinds of long-term loans including mortgages.

The Fed is now forecasting two increases in rates in 2019 instead of three. The central bank expects the long-term level of its main interest rate will be 2.8 percent, down from an earlier projection of 3 percent.

The yo-yo movements for the stock market were a result of markets trying to parse Fed Chairman Jerome Powell's comments, which essentially were: The economy is strong enough to warrant a rate increase now, but not so strong to need three rate increases, as the Fed had indicated a few months ago.

"Chairman Powell was threading the needle today," said Frances Donald, head of macroeconomic strategy at Manulife Asset Management. "He had to say that the economic picture is not as good as three months ago, while also saying that the pillars of the economy remain intact. And markets have to react, live, to that 'on the one hand, on the other hand' that Powell has to play in this economy."

But Powell may have failed to smooth the market's key anxieties. They fear that continued increases in interest rates will slow the economy too dramatically. They're also concerned about the trade dispute between the U.S. and China, which threatens economic growth and corporate profits.

Internet, technology and consumer-focused companies dropped. Facebook fell sharply after the New York Times reported that the social media network gave companies more access to users' personal data than it has previously said. The report said Facebook had arrangements with more than 150 companies including Microsoft, Amazon, Spotify and Netflix that some companies read, write and delete users' private messages or see the names of a user's friends or their news feeds without their consent.

Separately, the District of Columbia sued Facebook for allowing Cambridge Analytica, a data-mining firm working for the Trump campaign, to improperly access data from as many as 87 million Facebook users.

Facebook lost 7.2 percent to $133.25. It's down 39 percent since late July on concerns about a slowdown in user growth, multiple privacy and safety scandals, as well as the possibility of increased regulation in the future.

FedEx plunged after saying international shipping, especially in Europe, fell in the latest quarter. FedEx also said the U.S.-China trade dispute is affecting its business. The shipping company posted a smaller profit than analysts expected and said it will cut spending and offer buyouts to some workers to help make up for the shaky results.

Despite the losses, David Kelly, the chief global strategist for JPMorgan Funds, said the market will ultimately react to the health of the economy. He said the Fed's moves Wednesday made sense and could prolong the already long-lasting growth in the U.S.

"The Fed behaving in a very prudent, balanced way increases the possibility of a very balanced expansion" continuing, he said.

Oil prices turned higher after plunging a day earlier on worries about rising supplies and weakening global growth, which could weigh on demand.

Energy company stocks fell again. They're trading at their lowest levels since early 2016.

KTVU shared this story from Oakland.