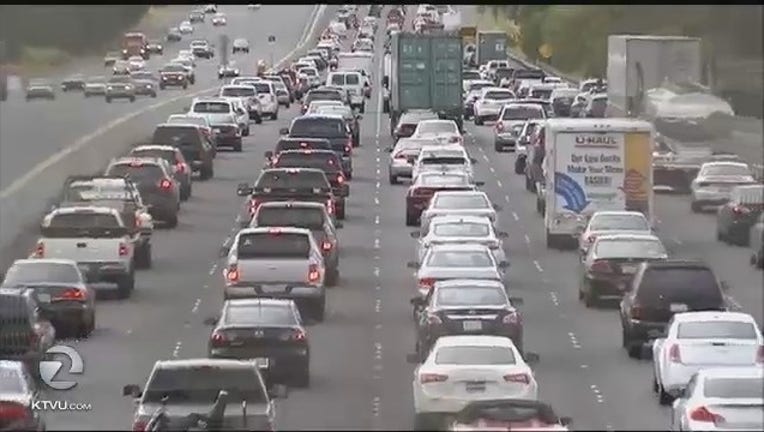 SAN FRANCISCO (KTVU) - A study released by the website WalletHub ranked the best and worst cities in the United States for drivers, The Bay Area did not fare well.

The study examined a wide range of factors such as commute times, traffic delays, insurance and gas prices, and vehicle crash rates. While Lubbock, Texas ranked best for drivers, Oakland was number 85, San Jose number 86, and San Francisco was among the bottom five at number 97, with only Philadelphia, Washington DC and New York ranking worse.

San Francisco city and county transportation officials say they are aware of the challenges, but add that much of the traffic is part of a good trend in the city's booming economy and transportation construction projects.

Those who drive the city streets are familiar with the traffic issues, even on a Thursday, summer vacation, non-rush hour drive.

"It was gridlock," said Diane Depreta, who was visiting San Francisco from Orange County, "It was a nightmare getting through especially the last hour we were stuck in that traffic."

"It's really bad," said Michael Falcone of San Francisco, "In general, in San Francisco it's a very me first mentality."

In the past few years, San Francisco drivers have been confronted with an increasingly difficult street-scape, having to navigate through a colorful course of new green bicycle lanes and brightly painted, red, "bus and taxi only" lanes. SFMTA spokesman Paul Rose says there are five miles of red lanes downtown, with another 26 miles of bus only lanes in the city, and the network is expected to expand.

"We've had our highest ridership numbers in five years, this past year so public transit is growing," said Rose.

Officials say they are aware of the shrinking number of lanes for drivers and have stepped up enforcement to keep traffic moving.

"We're doing everything we can to enforce the rules that we have on the books, including don't block the box, don't double park," Rose said, adding that the efforts include working with the myriad of construction crews that sometimes block traffic with equipment.

Eric Young, a San Francisco County Transportation Authority spokesman says the agency is in the middle of a four-year cycle that examines traffic congestion.

"We're certainly aware of all the things impacting traffic in the city, the result of a booming economy, the construction, the added traffic on the street," Young told KTVU.

County transportation authority officials say in the long term, more infrastructure projects should help move people from cars to public transit, such as the central subway project and a new project down the road with rapid buses.

"There is work that's going to be starting very soon on the Van Ness Rapid transit corridor," Young said.

Adding to the equation, San Francisco's population is increasing, with an additional 11,000 people added in 2014.

Transit officials say their goal is to have people taking more than 50-percent of their trips by walking, bicycle, or public transit.