But a recent study of veterans’ records has provided new insight into just how much this protection diminishes. Published Thursday in the journal Science, the study collected data of 780,225 veterans from the Veterans Health Administration between Feb. 1 and Oct. 1.

Researchers found each of the vaccines initially offered high levels of protection against infection. In March, Moderna’s protection measured at 89%, Pfizers registered at 87% and J&J came in at 86%.

Experts have long stressed the vaccines wouldn’t prevent all cases, which was demonstrated again by this study. But they’ve also emphasized the protection from severe illness and death the vaccines offer — which according to this study, declined at a much slower rate.

Elderly veterans who received the J&J shot were 52% less likely to die from the virus. 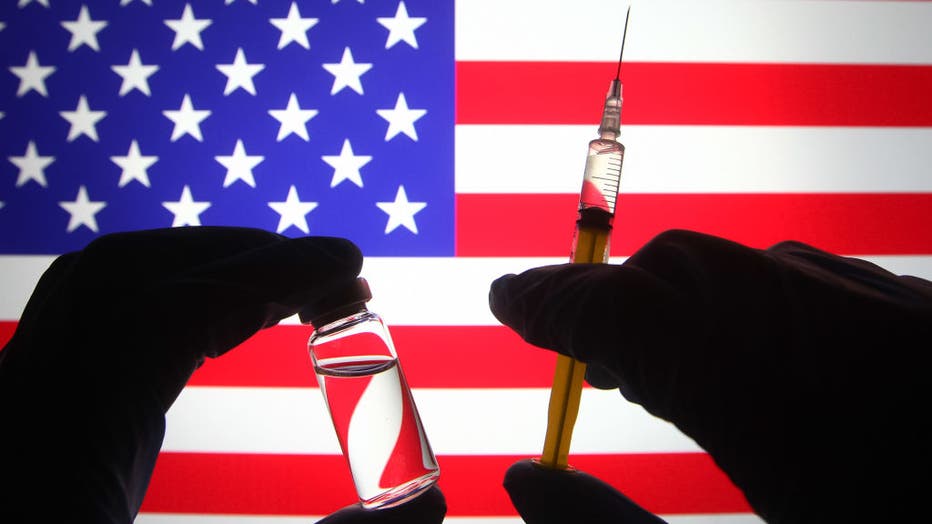 In this photo illustration, a silhouette of hands in medical gloves hold a medical syringe and a vial in front of the US flag. (Photo Illustration by Pavlo Gonchar/SOPA Images/LightRocket via Getty Images)

Younger veterans enjoyed a much higher level of protection. Pfizer recipients younger than 65 were 84% less likely to die than the unvaccinated veterans. Younger Moderna recipients were 82% less likely to suffer a fatal infection.

J&J recipients in that age group were 73% less likely to die.

The study’s authors said their findings do not directly address the benefits and risk of booster shots. But they said the data should be interpreted in the context of the ongoing public debate surrounding additional doses.

RELATED: With millions more cleared for boosters, Americans can choose which shot to receive

Currently, anyone who received a J&J vaccine at least than two months ago is eligible for a booster dose. Pfizer and Moderna booster shots are limited to people older than 65, those with medical conditions making them more susceptible to serious illness, nursing home residents and those working in high-risk settings.

Researchers do, however, make the case for continued public health measures like mask-wearing, hand washing and social distancing.