ANZA, Calif. - San Francisco Zoo officials on Monday expressed excitement over a bald eagle recently spotted in the wild in Southern California, and lauded a zoo program that helped in the recovery of the once endangered bird.

A photographer in the community of Anza, in Riverside County captured images of the majestic animal. Breana Schmidt, an aspiring wildlife photographer had gotten word that a bald eagle was seen visiting the area, so she set out to find the winged visitor. 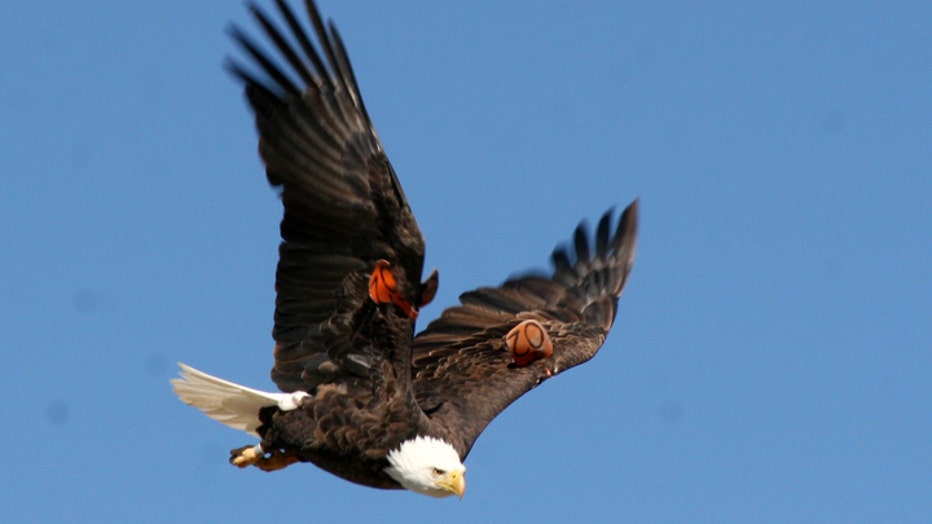 “I grabbed my camera and ended up finding her being chased by a bunch of ravens and turkey vultures trying to steal her food,” said Schmidt, who then followed the eagle to a field. “I walked the field and got as close as I could, watched her eat and took pictures for about 20 minutes."

The photographer was blown away by the size and the grace of the animal. "I was astounded by her incredible wingspan and how effortlessly she flew,” she noted.

Schmidt also noticed tags on the eagle and was able to determine it was associated with the San Francisco Zoo. She then reached out to zoo officials to share her photos, as she also sought to get more information about the eagle.

Zoo officials identified the bird as one that was part of its Bald Eagle Recovery Program, which ran from 1985 to 2007. The program was in conjunction with the Institute of Wildlife Studies and U.S. Fish and Wildlife. It resulted in the reintroduction of 103 bald eagles, according to the zoo.

"It turns out it was one of two female chicks that hatched in April 2000 and cared for by an adult pair at the Zoo’s Avian Conservation Center." officials explained. The chicks were then moved to eagle nests on Catalina Island, where they were then raised by a pair of wild eagles.

“This female bred at Lake Hemet for quite a few years before apparently being displaced by another eagle,” said Peter Sharpe, Ph.D. from the Institute of Wildlife Studies, noting that for the past few years, she'd been traveling around Southern California.

The photos taken by Schmidt have created quite a stir in the small community of Anza. "Everybody that lives in this town is so excited she is here and wants to know everything they can about her,” the photographer said.

For zoo officials, the images of the bird, which hatched two decades ago, offered a reason for celebration, as they marveled over how far the previously endagnered species has come.

“The photo sent to us was incredible, and gave us a chance to see one of the success stories from our program,” said Tanya Peterson, CEO and Executive Director of the San Francisco Zoological Society. “The fact that this particular female is still thriving in the wild almost 20 years to the month of its hatching marks a significant milestone and one we are happy to celebrate today.”