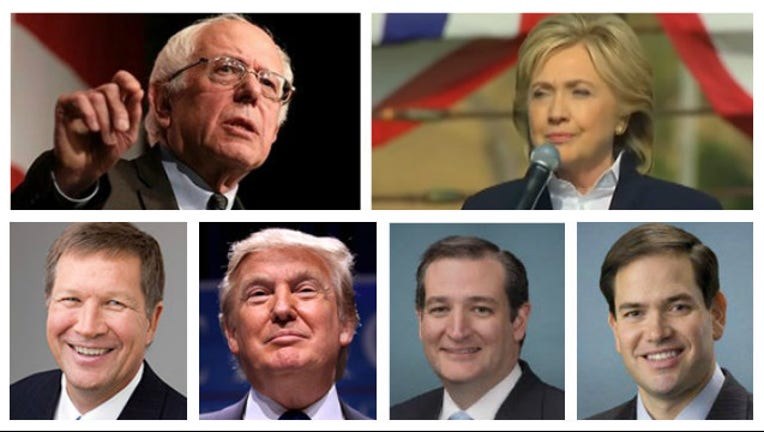 WASHINGTON (AP) — It's called Super Tuesday for a reason.

Voters in the four states to hold 2016 presidential primaries and caucuses thus far have handed out just a fraction of the delegates it takes to win the Democratic and Republican nominations.

But when a dozen states vote on March 1, nearly half the delegates needed to win the GOP nod and more than one-third required to take the mantle of the Democratic Party are at stake.

It's a huge moment, and the remaining major candidates each have a "best-case scenario" for a day that's likely to provide some decisive moments in the 2016 race for president.

After winning the past three Republican contests, the best-case scenario for the Republican front-runner on Super Tuesday isn't just to keep that streak alive — it's to run up the score and finish off one or more of his rivals.

Delegates will be awarded proportionally on Super Tuesday; there are no winner-take-all states. And so Trump is looking for commanding victories, especially in Southern states where Ted Cruz has long claimed an advantage. Trump wants to grab as many delegates as possible and add to the growing sense of inevitability that he will be his party's nominee.

How confident is Trump that he'll be able to pull it off? He plans to spend Tuesday campaigning in three states that won't even be voting March 1: Ohio, Kentucky and Florida.

And while it may be too much to hope for, Trump could whittle the contest down to a two-man race with Florida Sen. Marco Rubio, should he dominate the Texas senator across the South — especially in Cruz's home state of Texas.

Rubio has campaigned since Friday as if the Republican campaign has already settled into that two-man contest. But for that to actually happen, it will likely require finishing ahead of Trump in at least one state, and ahead of Cruz in just about every state but Texas.

And should he win more than one state, it may pressure Cruz, Ohio's John Kasich and retired neurosurgeon Ben Carson to consider quitting the race.

Preference polls show Rubio in a solid second or within reach of second in almost all the Super Tuesday states, with Trump ahead in every state but Cruz's Texas — where the most delegates are up for grabs on Tuesday.

To flip the script, Rubio has adopted an all-out assault on Trump's character and conservative bona fides, an approach he debuted in the final pre-Super Tuesday debate and built on over the weekend.

Cruz built his entire campaign on the notion of sweeping Super Tuesday, but Trump's momentum and appeal with social conservatives and evangelicals threatens to smash his Southern firewall.

The best case for Cruz on Tuesday is a solid win in his home state, perhaps with a victory in neighboring Oklahoma or Arkansas, and a string of second-place finishes ahead of Rubio.

The GOP establishment's moves to unite behind Rubio have hurt Cruz's ability to appear viable on a national level, despite his still-healthy war chest. Getting the better of his fellow freshman senator would dent the Floridian's ascendance and keep it a three-candidate contest for a few more weeks.

Texas' 155 GOP delegates are Super Tuesday's biggest prize, but their proportional allocation means Cruz would have to win a majority of votes cast statewide and in all 36 congressional districts to secure the full load.

And if Cruz doesn't win Texas, his home state could become his political Alamo — the site of his presidential campaign's last stand.

Ohio Gov. John Kasich hopes simply to survive Super Tuesday. His best-case scenario is to nab a handful of delegates in states such as Massachusetts and Virginia, enough to justify staying in the race until his home state votes on March 15.

Of the 11 states voting on Tuesday, Kasich has recently campaigned in only five: Virginia, Massachusetts, Vermont, Tennessee and Georgia. Make no mistake, Kasich's true focus is on trying to win Michigan's March 8 primary before going on to capture Ohio's 66 delegates a week later.

Kasich wants to post a home-state win, and hopes Rubio loses his home state of Florida on the same day.

"Ohio is what we think we will win," campaign spokesman Rob Nichols said.

For Clinton, the best case Super Tuesday is a simple one: turning her decisive win in South Carolina on Saturday into a sweep across the South and beyond that will cement the perception that she's on an all-but-unstoppable march to her party's nomination.

Clinton's huge margin among African-American voters, who turned out in a higher percentage in South Carolina than in 2008, was an encouraging sign to her aides, who are eager to expand their lead among the delegates that will decide the primary race.

The former secretary of state's roughly 2-to-1 win over Sanders in South Carolina translated into a 39-14 edge in delegates.

Should Clinton roll up such margins in the swath of Southern states that vote on Tuesday, it may not matter if she ekes out wins or close second-place finishes to Sanders elsewhere. Those wins may be enough to grow her delegate lead to the point where Sanders can't catch up.

After his drubbing in South Carolina, Sanders hopes to shift the momentum back in his favor with strong showings in Colorado, Massachusetts, Minnesota, Oklahoma and his home state of Vermont.

But Clinton's dominant performance on Saturday among black voters means the best case for the Vermont senator may not just be to win in those states. Instead, he needs to avoid blowout losses in Southern states such as Alabama, Arkansas, Georgia, Tennessee — and also in Texas, which awards more than 200 delegates.

The calendar will get better for Sanders in later March, as states such as Nebraska, Kansas and Maine take their turns.

But if Clinton is able to roll up a huge delegate lead on Super Tuesday through overwhelming support from black voters in the South, Sanders may not be able to overcome a growing sense among Democrats that Clinton is sure to win the nomination.