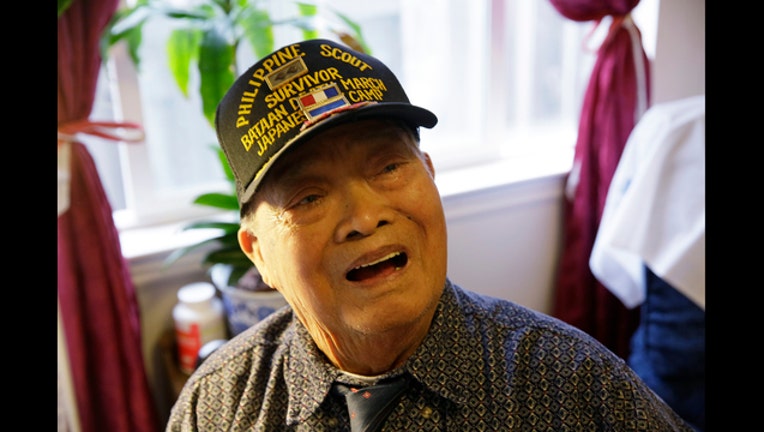 In this photo taken Thursday, April 6, 2017, Bataan Death March survivor Ramon Regalado reminisces at his home in El Cerrito, Calif. Survivors of the infamous Bataan Death March in the Philippines are marking the anniversary in San Francisco with spe

SAN FRANCISCO (AP) - A San Francisco Bay Area man who survived the infamous 1942 Bataan Death March and symbolized the thousands of unheralded Filipinos who fought alongside American forces during World War II has died. He was 100.

Ramon Regalado died Dec. 16 in El Cerrito, California, said Cecilia I. Gaerlan, executive director of the Bataan Legacy Historical Society, which has fought to honor Regalado and others. She did not have a cause of death.

"He really embodied the qualities of the greatest generation and love for country," she said.

Regalado was born in 1917 in the Philippines. He was a machine gun operator with the Philippine Scouts under U.S. Army Forces when troops were forced to surrender in 1942 to the Japanese after a grueling three-month battle.

The prisoners were forced to march some 65 miles (105 kilometer) to a camp. Many died during the Bataan Death March, killed by Japanese soldiers or simply unable to make the trek. The majority of the troops were Filipino.

Regalado survived and slipped away with two others - all of them sick with malaria. They encountered a farmer who cared for them, but only Regalado lived.

Afterward, he joined a guerrilla resistance movement against the Japanese and later moved to the San Francisco Bay Area to work as a civilian for the U.S. military.

In his later years, he gave countless interviews to promote the wartime heroics of Filipinos, who were promised benefits and U.S. citizenship but saw those promises disappear after the war ended.

The veterans have won back some concessions, including lump-sum payments as part of the 2009 economic stimulus package.

Gaerlan said Regalado did not make the trip due to poor health, but he got his medal in December in an intensive care unit in Richmond, California.

He is survived by his wife Marcelina, five children and many grandchildren.