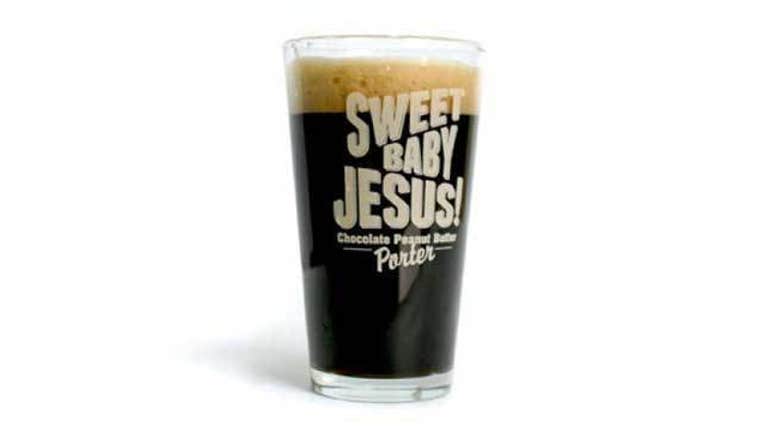 CLEVELAND (FoxNews.com) -- A Cleveland-based grocery chain has yanked a popular beer after one too many customers complained about its name: Sweet Baby Jesus.

The chocolate and peanut butter porter, released two years ago by Baltimore-based DuClaw Brewing Co., started selling in Ohio just two months ago. But now, after hearing from customers who said they were offended by its name, Heinen's Grocery Store, which has 22 locations in Ohio and Illinois, has pulled it from its shelves, Fox News reports.

Sweet Baby Jesus accounts for about 35 to 40 percent of DuClaw's total sales, making it the brewery's most popular beer.

"When you push boundaries and try to get one group excited about it, inevitably people are going to get upset on one side or the other," DuClaw founder Dave Benfield told the Business Journal.

He said he's heard complaints about the name before, but this is the first time the beer has been pulled from an entire chain of stores.

"We liked the phrase, which, at least to us, is a phrase of excitement or astonishment," Benfield said.

According to Fox News, Sweet Baby Jesus was previously pulled from military bases—but typically restocked a few weeks later. The company has received numerous calls and letters about the name, but Benfield is standing by the label, even though it could impede the brewery's expansion plans into the Midwest market.

"We don't censor ourselves because it might cost us dollars," he said.

Sweet Baby Jesus is still sold in 18 other locations throughout Ohio. DuClaw is working on expanding into other grocery chains, including Harris Teeter and Kroger in North Carolina, Virginia and Kentucky.