Children 8 and up should be screened for anxiety, US task force says

The U.S. Preventive Services Task Force issued April 2022 guidance saying every child 8 and older should be screened for anxiety and those 12 and older for depression.

The number of teenage girls who visited the emergency room for eating disorders doubled during the COVID-19 crisis, according to recent data from U.S. health officials — one of many examples shared in recent days of the pandemic’s harmful impact on mental health.

Stay-at-home orders, social isolation, loss of caregivers, economic hardships, and general fear of the virus have driven a surge in cases of depression, anxiety, trauma, loneliness, and suicidal ideation among children and teenagers, according to the American Academy of Pediatrics.

A study shared in late February by the U.S. Centers for Disease Control and Prevention found that pediatric emergency room visits for overall mental health conditions increased in 2020, the first year of the pandemic. It found that the proportion of such ER visits increased by 24% among U.S. children ages 5 to 11 and 31% among kids 12 to 17, compared to 2019.

Furthermore, the proportion of ER visits related to eating disorders doubled among U.S. girls aged 12 to 17. Visits for tic disorders, a condition in the nervous system characterized by sudden twitches, movements, or sounds that people do involuntarily, approximately tripled during the pandemic, the CDC said.

From 2021 through January 2022, emergency room visits for overall mental health conditions were "stable" among children and adolescents — but they also accounted for a larger proportion of all eating disorder visits, compared to 2019.

The CDC noted how eating disorders, specifically, can be triggered by a lack of structure in daily routines, emotional distress, and changes in food availability — all pandemic-related risk factors.

Both eating and tic disorders can occur with anxiety, depression, and obsessive-compulsive disorder (OCD), the CDC said. It added that these conditions may have been exacerbated by less access to mental health care during the public health crisis.

Dr. Chris Segrin of the University of Arizona talks with FOX Television Stations about how the COVID-19 pandemic altered human behavior.

Interestingly, the researchers also noted that increases in visits for tic disorders among adolescent females were "atypical," as these disorders usually begin earlier in childhood and are more prevalent among males. Researchers, including the CDC, have suggested that exposure to severe tics on TikTok and other social media platforms could be a contributing factor.

"The current trends in the number and proportion of (Mental Health Condition)-related (Eating Disorder) visits, along with previous research, indicate that the mental health effects of the pandemic might be particularly high among adolescent girls," the CDC said in the report.

A separate study, published on April 1, found that the mental health of U.S. teenagers had declined during the pandemic, an issue that was already concerning prior to 2020.

Overall, more than a third (37.1%) of U.S. high school students said they experienced poor mental health during the pandemic.

In addition, 19.9% had seriously considered attempting suicide, and 9% had attempted suicide, according to the CDC. 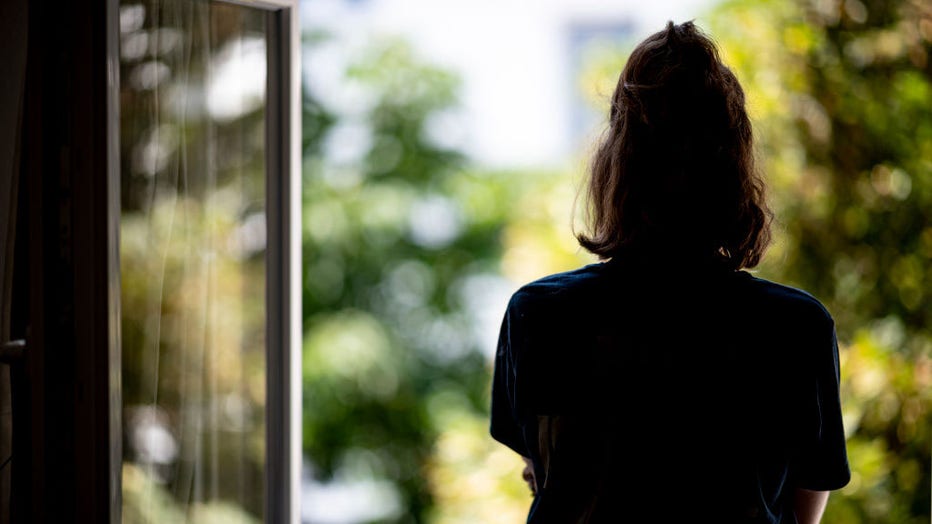 FILE IMAGE - A woman stands looking out of a window. (Photo by Fabian Sommer/picture alliance via Getty Images)

The U.S. Preventive Services Task Force this week shared draft recommendations on screening for depression and suicide risk in children ages 12 and up, and screening kids 8 and older for anxiety — even for those who are not showing signs or symptoms.

The task force is made up of an independent volunteer panel of experts in disease prevention and medicine. Its draft guidelines are now open for public comment through May, which is also Mental Health Awareness Month.

Currently, the task force said there is "not enough evidence to recommend for or against screening for anxiety and depression in younger children and screening for suicide risk in all youth" and noted how more research on the subject is critical.

"In the meantime, healthcare professionals should use their clinical judgment based on individual patient circumstances when deciding whether or not to screen," said Dr. Lori Pbert, a task force member.

CLICK HERE https://afsp.org/risk-factors-and-warning-signs for the warning signs and risk factors of suicide. Call 1-800-273-TALK for free and confidential emotional support.