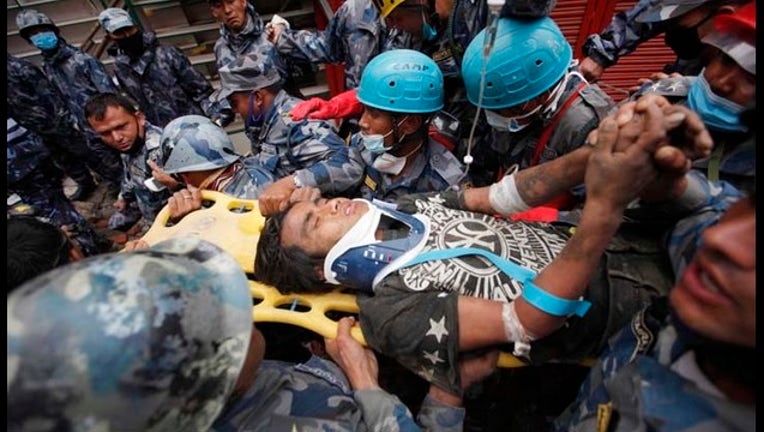 KATHMANDU, Nepal (AP) — A long-absent noise — cheers — rang out in Nepal's capital Thursday as rescuers pulled a teenager alive from the earthquake rubble he had been trapped in for five days. The joy interrupted a dreary and still fearful day in which thousands worried about aftershocks lined up to board free buses to their rural hometowns.

Hundreds cheered as the 15-year-old, Pemba Tamang, was pulled out of the wreckage, dazed and dusty, and carried away on a stretcher. He had been trapped under the collapsed debris of a seven-story building in Kathmandu since Saturday, when the magnitude-7.8 earthquake struck.

Nepalese rescuers, supported by an American disaster response team, had been working for hours to free him. L.B. Basnet, one of the police officers who helped rescue Tamang, said he was surprisingly responsive.

"He thanked me when I first approached him," said Basnet. "He told me his name, his address, and I gave him some water. I assured him we were near to him."

When Tamang was lifted out, his face was covered in dust, and medics had put an IV drip into his arm. A blue brace had been placed around his neck. He appeared stunned, and his eyes blinked in the sunlight as workers hurriedly carried him away.

He told The Associated Press he was working in a hotel in the building when it began to shake.

"Suddenly the building fell down," he said. "I thought I was about to die."

All he had to eat while he was trapped was some ghee, or clarified butter, he said.

The jubilant scene was welcome on a drizzly, chilly day in Kathmandu where many residents remained on edge over aftershocks that have rattled the city since Saturday's mammoth quake killed more than 5,800 people and destroyed thousands of houses and other buildings.

More than 70 aftershocks stronger than magnitude 3.2 have been recorded in the Himalayan region by Indian scientists over the past five days, according to J.L. Gautam, the director of seismology at the Indian Meteorological Department in New Delhi. The strongest, registering magnitude 6.9, came on Sunday, he said.

Rattled by the shaking and anxious to check on family members in outlying areas, tens of thousands of people have left the capital on buses this week. The government has been providing free bus service to many destinations.

"I have to get home. It has already been so many days," said Shanti Kumari, with her 7-year-old daughter, who was desperate to see family in her home village in eastern Nepal. "I want to get at least a night of peace."

Five days after the quake, tent cities in Kathmandu had thinned out, as overnight rainfall persuaded many people to return to their homes, even if they were damaged by the quake. The streets of the capital were slick with rain Thursday morning, the potholes were filled with water.

Still, life in the capital was slowly returning to the way it had been before the quake. Small snack shops were open. At a leather goods shop, a merchant brushed dust from a jacket on display. A man laid out carpets and rugs beneath an awning at a handicrafts store. Foreigners stood in line at a cellphone store.

"It's getting back to normal, but we're still feeling aftershocks. It still doesn't feel safe," said Prabhu Dutta, a 27-year-old banker from Kathmandu. He said he felt four aftershocks in the morning, including one that rattled the sliding glass doors of the bookshelf in his bedroom —"My morning wakeup notice," he said.

Dutta has been sleeping in his home, which has some cracks in the wall, for two nights, but the dozens of small aftershocks that he has felt since Saturday's huge quake make him uneasy. "I am worried about whether they will continue for a long time or whether it will calm down."

Gautam of the Indian Meteorological Department said the aftershocks could continue for long periods.

"We can expect aftershocks over the next few weeks, or months, or even years," he said. "These aftershocks are quite normal after a powerful earthquake of such magnitude."

There was no way, however, for seismologists to predict when the "next big one" would occur, he said.

Dutta said some people are returning to work, including at his bank, but that it was impossible to concentrate. "We roam around the office. We only have one topic of conversation: the earthquake."

Many people in Kathmandu are going to the country fearing that a big aftershock is coming, he said.

On Wednesday, helicopters finally brought food, temporary shelter and other aid to villages northwest of Kathmandu in the mountainous Gorkha District near the epicenter. Entire clusters of homes there were reduced to piles of stone and splintered wood. Women greeted the delivery with repeated cries of "We are hungry!"

While the death toll in the village of Gumda was low — only five people were killed and 20 were injured among 1,300 residents — most had lost their homes and desperately needed temporary shelter, along with the 40-kilogram (90-pound) sacks of rice that were delivered Wednesday.

Meanwhile, at least 210 foreign trekkers and residents stranded in the Langtang area north of Kathmandu had been rescued, government administrator Gautam Rimal said. The area, which borders Tibet, is popular with tourists.

Police said the official death toll in Nepal had reached 5,825. That figure did not include the 19 people killed at Mount Everest — five foreign climbers and 14 Nepalese Sherpa guides — when the quake caused an avalanche that hit part of the base camp.

Dutta, the banker, said that while many of Kathmandu's cement and concrete buildings survived with only minor damage, many of the older buildings, ones made of tile, wood or bricks, have been leveled.

"Things have to return to normal, but it will take time," he said. "No one is ready to do the work needed to recover because of the closeness of the deaths. There is still shock."