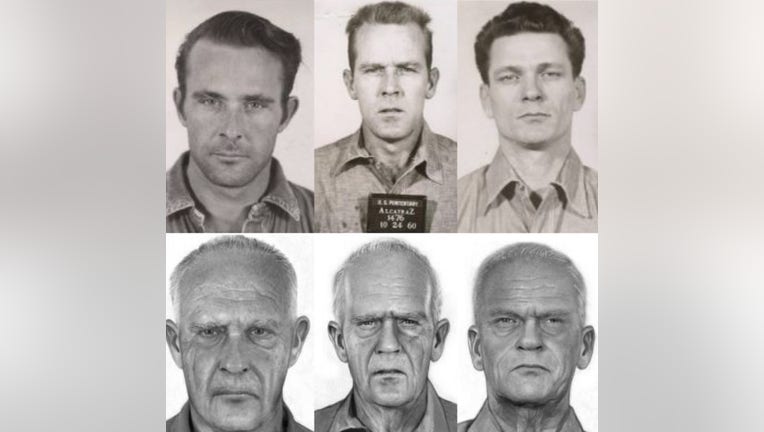 SAN FRANCISCO - The storied, daring and seemingly unfathomable escape of three inmates from Alcatraz Federal Penitentiary has long captured the imagination and fascination of the American public, and images of what the prisoners might look like today have recently reignited the interest surrounding the unsolved case.

All three, who were at Alcatraz after being convicted of bank robberies, would be in their 90s today.

There has long been strong speculation that the men never survived the dangerous, choppy waters of the San Francisco Bay, but since their bodies were never found, the U.S. The Marshals Service has left the case open.

The intrigue surrounding the events of that night on June 11, 1962, has provided ample material for movies and countless books on what happened to Morris and the Anglin brothers.

Bay Area author and Alcatraz expert Jolene Babyak has a unique perspective of the events surrounding the escape, as she was a resident there at time. 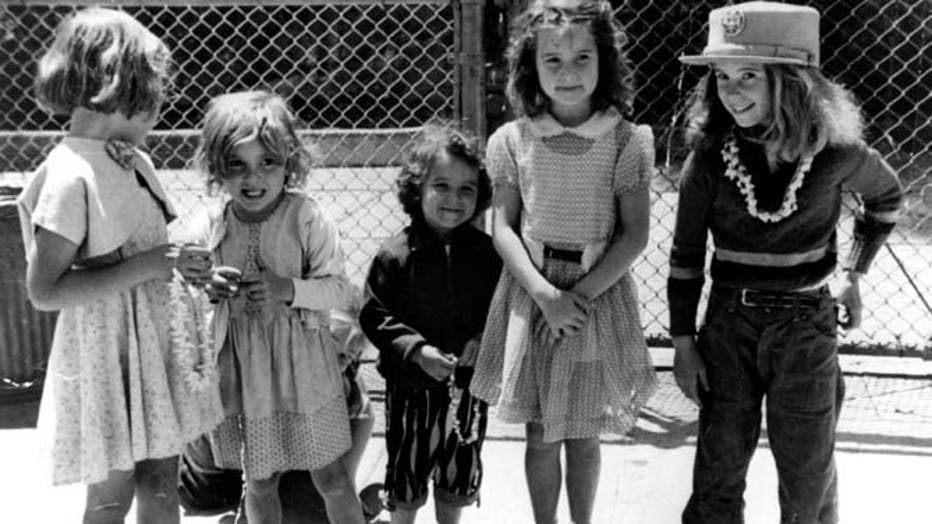 Author Jolene Babyak, seen here at age 8, (far right), was among those whose family lived on Alcatraz.  (Corinne Dollison Edwards)

"The story happened in front of my eyes," she told KTVU in a recent interview.

Babyak was 15-years-old, and she and her family were housed on the island. Her father, Arthur M. Dollison, was the associate acting warden of the prison.

It so happened that on the night of the escape, Warden Olin G. Blackwell was on vacation, so it was Dollison who was in charge and called to respond.

Babyak recalled in vivid detail her late father’s role on the night of the escape.

"The order of business is that you immediately open a safe which has a detailed sort of plan, you know like a war room plan: who you call first, who you assign where, who has guns, and you know, goes out and looking for them, who does what." she explained. "And then [he] proceeded to call the Bureau of Prisons in Washington, D.C., and then he alerted the media, and then they got the FBI over, and then they started interviewing prisoners," she said, adding, "So it was a busy day for him."

The 75-year-old Oakland resident, who has spent decades researching Alcatraz and written about half a dozen books about the island famously known as "The Rock," also shared other first-hand details she remembered from that night.

"The siren woke me up. And I had never heard it before. So I wasn't exactly sure. You know, you have that cognitive dissonance. You're not exactly sure what that siren is, but you know deep in your heart what it is," she recalled. "It woke me up, and I got dressed and went downstairs and my mother said, ‘Get dressed. We've got to search the house. There's been an escape.’"

It’s in those indelible events in life during which colorful, specific details of a moment remain with you for years to come.

Babyak distinctly recalled how she and her mother searched the entire house, went through all the rooms and under the beds. And then there was the matter of searching the basement, which had an outside entrance.

"So that was a little scary for us," Baybak shared, and then added with a laugh, "She wanted me to go first, which I thought was really interesting. And so I went, ‘Wait, wait!’ I ran and I got a knife. And on the way to the kitchen I'm thinking, ‘Well I don't want to get a big butcher knife because if there is somebody down there you know, they’ll kill me with it.’"

So at 15, she was quite aware of the extreme danger of this next search, and she made a decision to grab a smaller knife, which she figured would be less of a threat in the hands of convicts.

"So I came back with a little paring knife. You know, like a two-and-a half inch or three inch paring knife. And she laughed at me," she said, recalling her mother's reaction. "I explained to her my theory which was, I didn't want to get a butcher knife, and she agreed with me, but she still made me go first. And we went down into the basement and looked around town there. There wasn't anything."

FBI agents would end up staying at her home that night as the investigation took off.

Investigators would learn how Morris and the brothers Anglin broke out of the maximum security prison, putting into action a months-in-the-making elaborate plan involving sharpened spoons, other manipulated items-turned tools, and more than 50 stitched raincoats for a makeshift raft.

Dummy heads made of plaster and topped with real human hair were placed in the escapees' beds and used to throw off the night guards.

Babyak has been among the many who have long contended the men did not make a full escape and likely never made it very far once they got off the island.

"I’m kind of a Debbie Downer, not because I'm protecting the reputation of my dad or the prison. I think it would be even more interesting story, but just logically," she said.

Her extensively researched reasoning was as follows:

She believed that most likely the prisoners’ raft would not have stayed intact in those conditions.

"If their raft didn’t hold, they were swimming, and they were going out towards the Gate, and they were not able to control their destiny at all. And then they would probably succumb to the temperature which was pretty cold."

And in the incredibly unlikely scenario they did make it to land, she believed that the characteristics of the three men were such that they would not have gotten very far.

The author said that those who ended up at Alcatraz-- roughly 1% of the U.S. federal prison population at the time-- were not necessarily the most violent convicts, rather, they were among the most psychologically troubled.

She said many had troubled childhoods and suffered a multiplicity of problems from a young age.

"They were more or less narcissistic, because troubled people tend to focus on themselves even more, right? I mean they got those deficits. And they felt to some extent entitled, you know because it was owed to them, and they had thinking that was not as rational as you and I," Babyak noted, saying that in some ways they felt both invisible and entitled, so they went after whatever they wanted without thinking about the consequences.

"You’ve got personality characteristics that you’re going to take with you when you escape. And you’re gonna get caught, because you’re gonna do the same things that you’ve always done," she said.

These characteristics, Babyak contended, would be liabilities for the fugitives.

And while Morris has been portrayed as the brilliant mastermind behind the escape plan, she didn’t believe he had the tools to live out in the real world without getting caught.

"Morris was a bright guy," Babyak said, "And they make a big deal out of that. But from 13 to 35 he’d never been out of prison more than two years."

As for Clarence and John Anglin, she said they were not the brightest. "The Anglin brothers were kind of doofuses," she laughed, noting how they got caught for armed bank robbery in Alabama within four days of the crime.

During the commission of the crime, they stole two cars, one that was quite conspicuous and easily identifiable.

In addition, they left their home state of Florida to carry out the robbery.

"The funniest part of the story, is that in Alabama in 1958, according to local newspapers, you could get the death penalty for bank robbery. And they were Floridians, so they had crossed state lines to rob a bank in a state where they had the death penalty," Babyak pointed out.

The Alcatraz expert did not believe for a second that the fugitives were still being actively sought.

"I can guarantee you that the U.S. Marshals are not on the lookout. They are not. Absolutely not," she said. "They have too much other stuff to do that’s more important. And anything, it costs money," she stressed.

The U.S. Marshals Service told KTVU that the case remained open. On its website, along with the age-progression photos, the agency included a headline with the link "View Northern California's Most Wanted Fugitives." The Marshal Service did note the photos were not new and that it did not re-release the images.

But the ongoing interest in the 60-year-old case, further proved that what happened to Frank Morris and Clarence and John Anglin and how they hatched an ingenious, unimaginable escape plan, remained a fascination for many and a legendary story fixed into Bay Area history. 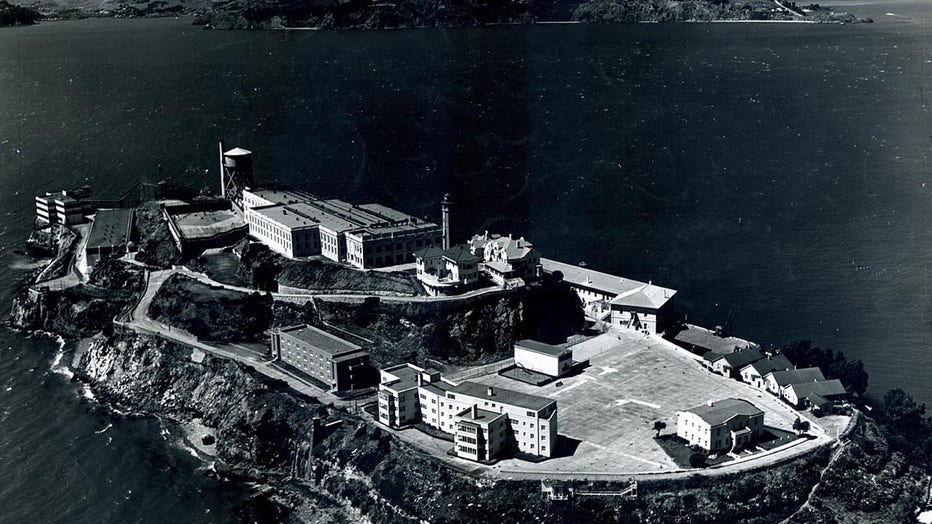 This file photo of Alcatraz island shows the prison employees' family quarters situated on the right and the prison up top. (Jolene Babyak) 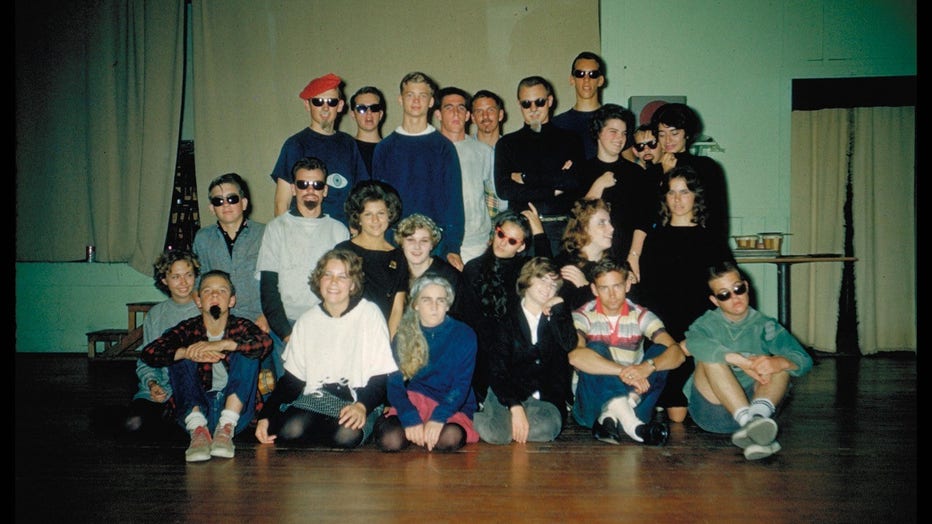