3 cruise ships to anchor at Port of Oakland

OAKLAND, Calif. - Three cruise ships without any passengers will idle at the Port of Oakland starting this weekend while the U.S. embargoes cruise operations, the port said on Friday.

The first two ships are scheduled to arrive on Saturday and the third is expected on Sunday.

The Port of Oakland said two Norwegian Cruise Line vessels would tie up at Oakland's Outer Harbor Terminal, which currently isn't in use for the port's contained shipper business.

Another Norwegian Cruise Line vessel will dock at the Howard Terminal at the Oakland Estuary.

The port said that terminal is no longer considered to be large enough for container operations.

The three ships could remain at berth for two to three months, according to the cruise line. 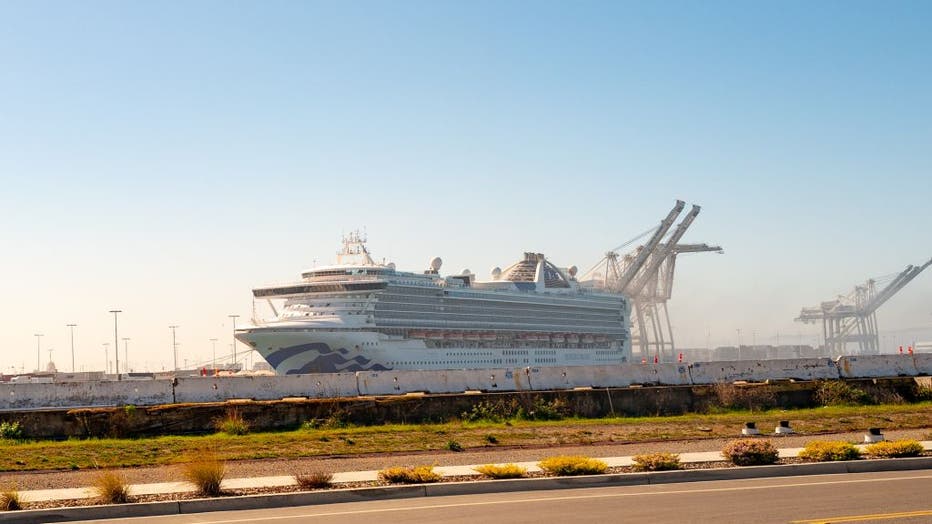 The Grand Princess cruise ship, docked at the Port of Oakland, discharges passengers exposed to the COVID-19 coronavirus in preparation for quarantines, during an outbreak of the disease in Northern California, Oakland, California, March 12, 2020. (P

The port said it is making berth space available because about 100 cruise line ships worldwide are seeking safe harbor during the new coronavirus pandemic and an estimated 80,000 crew members are on board passenger liners at sea that are waiting to tie up somewhere.

Port of Oakland Executive Director Danny Wan said in a statement, "These ships are under federal requirements to report health concerns and we understand they haven't had a history of coronavirus, so we'll do what we can to help."

The U.S. Coast Guard and Norwegian Cruise Lines haven't reported any cases of coronavirus aboard the three vessels, according to the port.

In addition, there are no plans for crew members to disembark in Oakland, the port said.

The U.S. government has banned cruise operations in U.S. ports during the coronavirus pandemic and most cruise lines globally have suspended operations.

The Port of Oakland doesn't serve passenger liners, but in March it provided an emergency berth to the cruise ship the Grand Princess.

Hundreds of passengers, including some who had tested positive for COVID-19, disembarked from that ship.