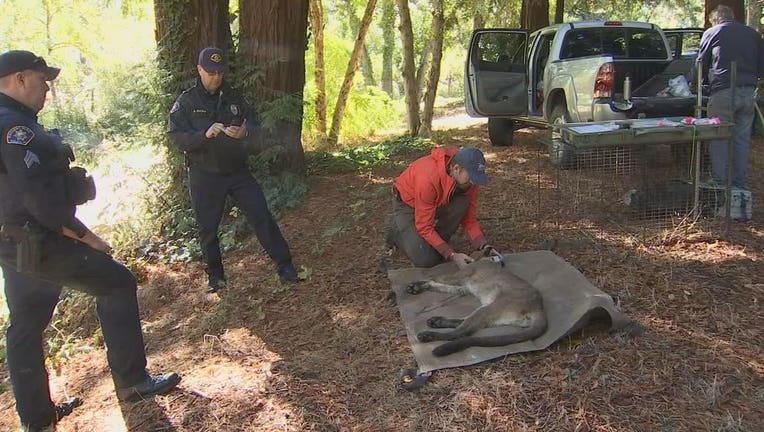 ROHNERT PARK, Calif. - Wildlife experts say a mountain lion seen in Rohnert Park near two schools on Monday was tranquilized and is undergoing medical evaluation after demonstrating behavior unlike a full-grown predatory animal.

The early-morning sighting of the mountain lion prompted school lockdowns for about three hours. Evergreen Elementary and Lawrence Jones Middle schools were locked down after the lioness was tranquilized.

Mid-morning, officers had surrounded the big cat, where it was roaming near the area of the Five Creek Trail and Crane Creek Trail just east of Eagle Park. And by 11 a.m., the 70-pound adult female, who was then crouching, perhaps in some sort of distress, had been tranquilized, Lt. Jeff Nicks said.

Wildlife experts say a mountain lion seen in Rohnert Park near two schools on Monday was tranquilized and is undergoing medical evaluation after demonstrating behavior unlike a full-grown predatory animal.

The Department of Fish and Game was called in to help. They said that this mountain lion has a tracking collar and biologists have been following her movements since March.

Mountain lions have been sighted regularly lately in Daly City and  San Francisco.

Nicks said though police get lion sightings called in once in a while, this episode, in his 23 years of service was his first up close and personal experience.

"We have an elementary school approximately a hundred yards from this location and we have an apartment complex probably less than 50 yards away as well," said Lt. Nicks.

So, police called in wildlife experts because the animal's behavior was odd for a grown predator.

"It was crouching, not able to move with a small amount of people, probably eight people, which is a lot with 75 feet. That animal would have darted off, just hearing us coming 500 feet away. So to see it just sitting there like that, we know there was something significantly wrong it," said Doris Duncan, Executive Director of Wildlife Rescue Sonoma County.

"Based on the animal's tracking past and the animal's current behavior, they determined that probably the best thing to do was to tranquilize it," said Lt. Nicks.

A representative of TrueWild.org, a wildlife conservation and advocacy group which put the tracking collar on the lion in March, tranquilized the lioness. TrueWild then took the lioness to Wildlife Rescue Sonoma County; one of only four wildlife facilities in California licensed to handle mountain lions.  After an initial evaluation it was then taken to a private wildlife qualified veterinarian.

Though the lioness was supposed to be back to Wildlife Rescue in an hour, veterinarians decided to look much closer. "Any time you're able to do a full medical work up you can find out a lot about what going on with the animal internally," said Duncan.

Late in the afternoon, when the lion was returned to Wildlife Rescue, all tests and MRIs were normal.

Once the lioness is fully alert and healthy again, the state Department of Fish and Wildlife will release her into the wild. 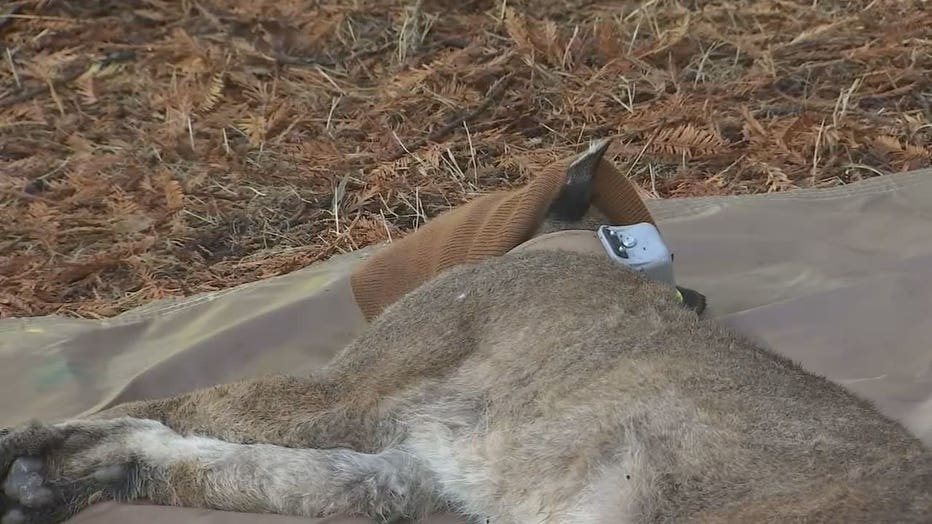