Former President Donald Trump released a lengthy statement about the FBI executing a search warrant at his Florida home.

WASHINGTON - The FBI searched Donald Trump's Mar-a-Lago estate as part of an investigation into whether he took classified records from the White House to his Florida residence, people familiar with the matter said Monday, a move that represents a dramatic and unprecedented escalation of law enforcement scrutiny of the former president.

Trump, disclosing the search in a lengthy statement, asserted that agents had opened up a safe at his home and described their work as an "unannounced raid" that he likened to "prosecutorial misconduct."

The search intensifies the months-long probe into how classified documents ended up in more than a dozen boxes located at Mar-a-Lago earlier this year. It occurs amid a separate grand jury investigation into efforts to overturn the results of the 2020 presidential election and adds to the potential legal peril for Trump as he lays the groundwork for another run.

Familiar battle lines, forged during a four-year presidency shadowed by FBI and congressional investigations, quickly took shape again Monday night. Trump and his allies sought to cast the search as a weaponization of the criminal justice system and a Democratic-driven effort to keep him from winning another term in 2024 — even though the Biden White House said it had no prior knowledge of it, and the current FBI director, Christopher Wray, was appointed by Trump five years ago and served as a high-ranking official in a Republican-led Justice Department. 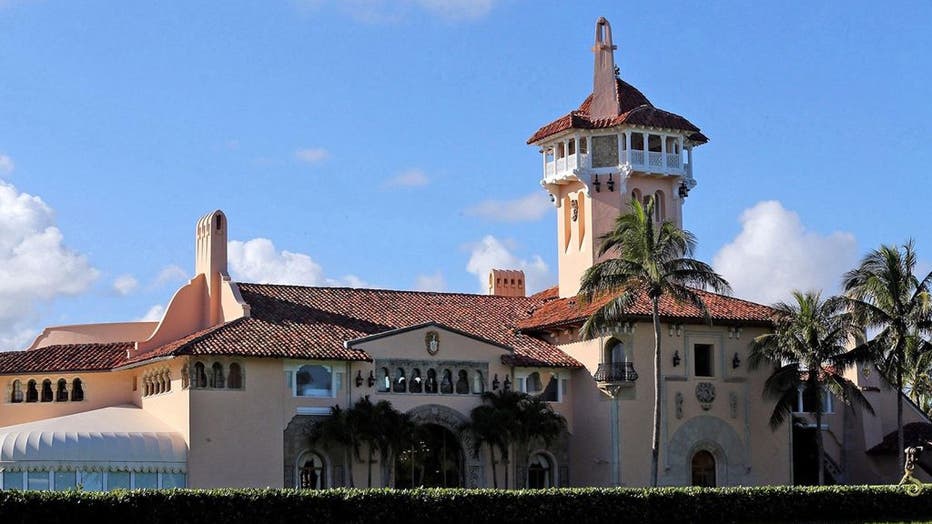 "These are dark times for our Nation, as my beautiful home, Mar-A-Lago in Palm Beach, Florida, is currently under siege, raided, and occupied by a large group of FBI agents," Trump wrote. "Nothing like this has ever happened to a President of the United States before."

"After working and cooperating with the relevant Government agencies, this unannounced raid on my home was not necessary or appropriate," Trump said in his statement.

Justice Department spokesperson Dena Iverson declined to comment on the search, including about whether Attorney General Merrick Garland had personally authorized it.

Trump did not elaborate on the basis for the search, but the Justice Department has been investigating the potential mishandling of classified information after the National Archives and Records Administration said it had retrieved from Mar-a-Lago 15 boxes of records containing classified information earlier this year. The National Archives said Trump should have turned over that material upon leaving office, and it asked the Justice Department to investigate.

RELATED: Trump in NYC during FBI raid on Mar-a-Lago

There are multiple federal laws governing the handling of classified records and sensitive government documents, including statutes that make it a crime to remove such material and retain it at an unauthorized location. Though a search warrant does not suggest that criminal charges are near or even expected, federal officials looking to obtain one must first demonstrate to a judge that they have probable cause that a crime occurred. 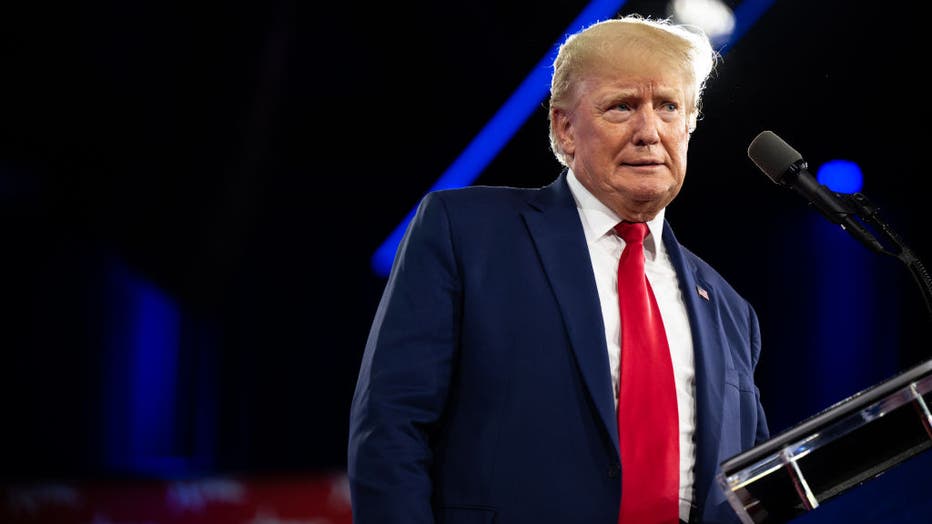 DALLAS, TEXAS - AUGUST 06: Former U.S. President Donald Trump speaks at the Conservative Political Action Conference (CPAC) at the Hilton Anatole on August 06, 2022 in Dallas, Texas. CPAC began in 1974, and is a conference that brings together and ho

Two people familiar with the matter, who spoke on condition of anonymity to discuss an ongoing investigation, said the search happened earlier Monday and was related to the records probe. Agents were also looking to see if Trump had additional presidential records or any classified documents at the estate.

Trump has previously maintained that presidential records were turned over "in an ordinary and routine process." His son Eric said on Fox News on Monday night that he had spent the day with his father and that the search happened because "the National Archives wanted to corroborate whether or not Donald Trump had any documents in his possession."

Asked how the documents ended up at Mar-a-Lago, Eric Trump said the boxes were among items that got moved out of the White House during "six hours" on Inauguration Day, as the Bidens prepared to move into the building.

"My father always kept press clippings," Eric Trump said. "He had boxes, when he moved out of the White House." 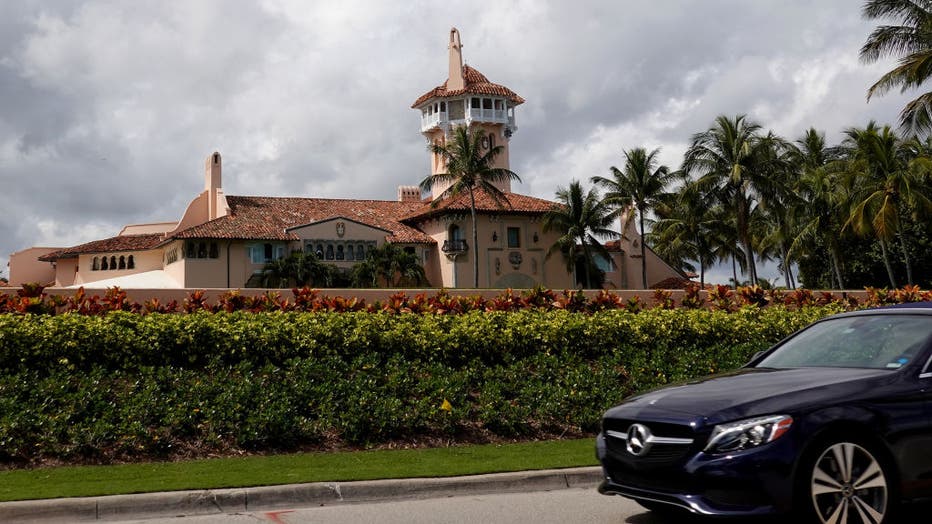 A car passes in front of former President Donald Trump's Mar-a-Lago resort on February 11, 2022 in Palm Beach, Florida. Published reports indicate that possible classified material was among documents recovered by the National Archives in January fro

Trump emerged from Trump Tower in New York City shortly before 8 p.m. and waved to bystanders before being driven away in an SUV.

In his first public remarks since news of the search surfaced, Trump made no mention of it during a tele-town hall on behalf of Leora Levy, the Connecticut Republican he has endorsed in Tuesday’s U.S. Senate primary to pick a general election opponent against Democratic U.S. Sen. Richard Blumenthal. Trump gave his public backing to Levy late last week, calling her on Monday the best pick "to replace Connecticut’s joke of a senator."

But in a social media post Monday night, he was much more unguarded, calling the search a "weaponization of the Justice System, and an attack by Radical Left Democrats who desperately don’t want me to run for President in 2024."

Other Republicans echoed that message. GOP National Committee Chair Ronna McDaniel denouncing the search as "outrageous" and said it was a reason for voters to turn out in November.

Florida Gov. Ron DeSantis, a Republican who is considered a potential 2024 presidential candidate, said in a statement on Twitter that it was "an escalation in the weaponization" of U.S. government agencies. Kevin McCarthy, the House Minority Leader, said in a tweet that the Justice Department "has reached an intolerable state of weaponized politicization" and said that if Republicans win control of the U.S. House, they will investigate the department.

Trump lambasted that decision and then stepped up his criticism of the FBI as agents began investigating whether his campaign had colluded with Russia to tip the 2016 election. He fired Comey during that probe, and though he appointed Wray months later, he repeatedly criticized him too as president.

Former President Trump on Monday said that his Mar-a-Lago home in Florida is "under siege" by a "large group" of FBI agents conducting a search warrant. "Nothing like this has ever happened to a President of the United States before. After working and cooperating with the relevant Government agencies, this unannounced raid on my home was not necessary or appropriate," Trump said. "It is prosecutorial misconduct, the weaponization of the Justice System, and an attack by Radical Left Democrats who desperately don't want me to run for President in 2024, especially based on recent polls, and who will likewise do anything to stop Republicans and Conservatives in the upcoming Midterm Elections." "Such an assault could only take place in broken, Third-World Countries. Sadly, America has now become one of those Countries, corrupt at a level not seen before," Trump said, alleging that the FBI agents broke into his safe. "What is the difference between this and Watergate, where operatives broke into the Democrat National Committee?" he said. "Here, in reverse, Democrats broke into the home of the 45th President of the United States." A source familiar told Fox News that the raid occurred early this morning. The source said agents brought a "safe cracker" and cracked a "relatively new" safe in Mar-a-Lago. The source told Fox News there was "nothing in it." Multiple sources tell Fox News the FBI's raid of Mar-a-Lago is related to the materials Trump allegedly brought to his private residence after his presidency concluded. That matter was referred to the Justice Department by the National Archives and Records Administration, which said it found classified material in 15 boxes at the residence.

Thomas Schwartz, a Vanderbilt University history professor who studies and writes about the presidency, said there is no precedent for a former president facing an FBI raid -- even going back to Watergate. President Richard Nixon wasn’t allowed to take tapes or other materials from the White House when he resigned in 1974, Schwartz noted, and many of his papers remained in Washington for years before being transferred to his presidential library in California.

"This is different and it is a sign of how unique the Trump period was," said Schwartz, author of "Henry Kissinger and American Power: A Political Biography." "How his behavior was so unusual."

The probe is hardly the only legal headache confronting Trump. A separate investigation related to efforts by Trump and his allies to undo the results of the 2020 presidential election — which led to the Jan. 6, 2021, riot at the U.S. Capitol — has also been intensifying in Washington. Several former White House officials have received grand jury subpoenas.

And a district attorney in Fulton County, Georgia, is investigating whether Trump and his close associates sought to interfere in that state's election, which was won by Democrat Joe Biden.