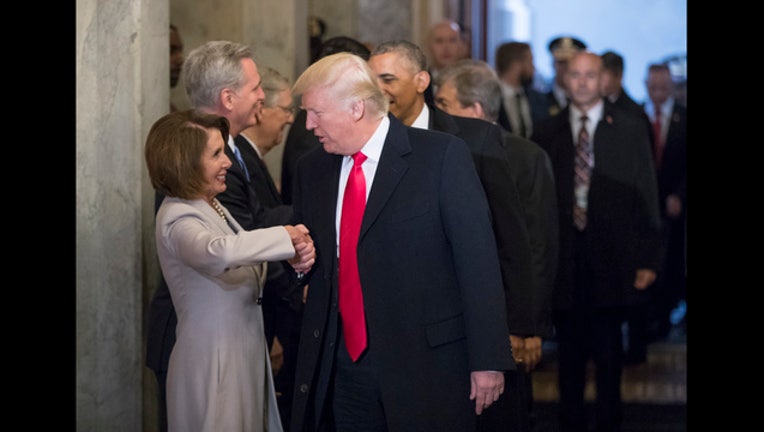 But they don't really need to. Trump and Pelosi go way back, from the time she first showed up at Trump Tower fundraising for the Democrats long before he would become president or she the House speaker. Two big-name heirs to big-city honchos -- Trump and Pelosi each had fathers who were political power players in their home towns -- they've rubbed elbows on the Manhattan social scene for years.

And despite daily barbs in Washington, he's always "Mr. President" to her, and she's one prominent politician he has not labeled with a derisive nickname.

Not quite friends, nor enemies, theirs is now perhaps the most important relationship in Washington. If anything is to come of the new era of divided government, with a Republican president and Democratic control of the House, it will happen in the deal-making space between two of the country's most polarizing politicians.

The day after their election night phone call, Trump and Pelosi did speak again, indirectly, across Pennsylvania Avenue.

"I really respected what Nancy said last night about bipartisanship and getting together and uniting," Trump said in a press conference at the White House. "That's what we should be doing."

Pressed after his unusual public lobbying for Pelosi to become House speaker, Trump insisted he was sincere.

"A lot of people thought I was being sarcastic or I was kidding. I wasn't. I think she deserves it," he said. "I also believe that Nancy Pelosi and I could work together and get a lot of things done."

Pelosi sent word back a few minutes later from her own press conference at the Capitol, which she delayed for nearly an hour as the president conducted his.

"Last night, I had a conversation with President Trump about how we could work together," Pelosi said, noting that "building infrastructure" was one of the items they discussed.

"He talked about it during his campaign and really didn't come through with it in his first two years in office," she nudged. "I hope that we can do that because we want to create jobs from sea to shining sea."

Despite all the campaign trail trash talk, both Trump and Pelosi have incentive to make some deals.

The president could use a domestic policy win heading into his own re-election in 2020, alongside his regular railing against illegal immigration, the "witch hunt" of the Russia investigation or other issues that emerge from his tweets.

Democrats, too, need to show Americans they can do more than resist the Trump White House. It's no surprise that two of the top Democratic priorities in the new Congress, infrastructure investment and lowering health care costs, dovetail with promises Trump made to voters, but has not yet fulfilled.

Trump has long viewed Pelosi as both a foil and a possible partner, and she sees in him the one who can sign legislation into law.

The president has told confidants that he respects Pelosi's deal-making prowess and her ability to hang on to power in the face of a series of challenges from the left wing of the party, according to four White House officials and Republicans close to the White House. The officials were not authorized to publicly discuss private conversations and requested anonymity.

He told one ally this month that he respected Pelosi "as a fighter" and that he viewed her as someone with whom he could negotiate.

"The president respects her," said Short.

Short described the interaction between Pelosi and Trump during a 2017 meeting with other congressional leaders at the White House to prevent a government shutdown. "They were throwing pros and cons back at each other," he said.

"The question I can't answer is to what extent will Democrats give Pelosi political bandwidth" to strike deals, Short said. He pointed to potential areas of agreement like infrastructure, drug prices and prison reform.

But part of Trump's push for Pelosi to return to power was more nakedly political. Pelosi has long been a popular Republican target, spurring countless fundraising efforts and attack ads. And Trump has told advisers that, if needed, he would make her the face of the opposition in Democratic party until the 2020 presidential field sorts itself out.

Pelosi's name draws some of the biggest jeers at his rallies and he believes that "she could be Hillary" in terms of a Clinton-like figure to rally Republicans against, according to one of the advisers familiar with the president's private conversations.

At the same time, Trump has not publicly branded Pelosi with a mocking nickname. She's no "Cryin"' Chuck Schumer, as he calls the top Senate Democrat, or "Little" Adam Schiff at the Intelligence Committee or "Low IQ" Rep. Maxine Waters of California, who will chair the Financial Services Committee.

On whether Trump likes Pelosi as ally or adversary, Short said, "I don't think those are mutually exclusive."

When Trump and Democrats were trying to broker an immigration deal in September 2017, she suggested he could tweet his assurances to the young Dreamers. And he did.

Around the same time when Trump and congressional leaders convened at the White House to avoid a federal government shutdown, Republicans and Trump's own Cabinet team pressed for their preferred solution. But Pelosi kept asking a simple question: How many Republican votes could they bring to the table? When it was clear they could not bring enough for passage, Trump intervened and agreed with Democrats --Chuck and Nancy," as he came to call them.

Votes, Pelosi explained later, were the "currency of the realm." Trump, as a businessman, she said, got it.

Pelosi is poised to become House speaker again if she wins her election in January. Asked this week how Trump might react to having a woman in power, Pelosi recalled the first time she held the office, when George W. Bush was president, in 2007.

Bush would call her "No. 3," she said, a reference to the speaker's spot in the presidential succession line, after the president and the vice president.

"He treated me and the office I hold with great respect," she said. "I would expect nothing less than that from this President of the United States."