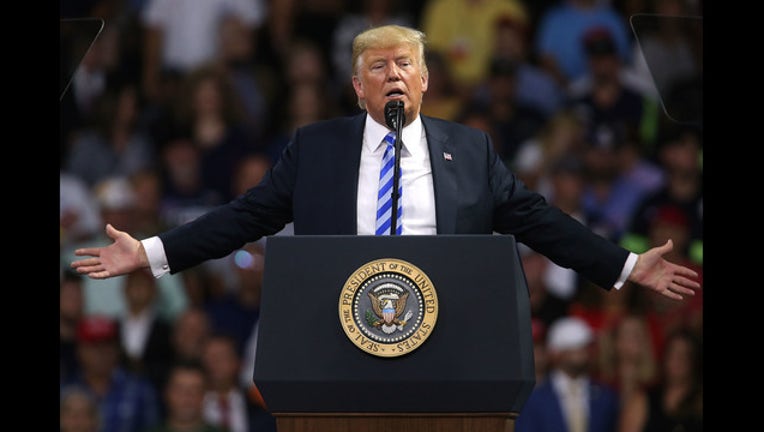 NEW YORK (AP) - Fox News’ Ainsley Earhardt was by turn sympathetic and gently probing during her interview with President Donald Trump that aired on Thursday, yet was also caught mischaracterizing one of his answers while promoting the event.

Instead of a straight news reporter, Trump invited to the White House a host of his favorite morning show, which airs curated news and opinion tailored to his supporters. Trump called Earhardt “a truly great person” while tweeting a promotion of her book in May.

Portions of the interview were aired throughout the three-hour program.

Earhardt started with ice-breakers, asking Trump how he handles all the publicity. She interjected, “right,” when the president complained that reporters “like to cover nonsense.”

Her questions about the news were direct, if not particularly challenging, and she didn’t ignore the big stories.

She asked Trump to respond to Cohen’s claim that the president directed him to pay for the silence of two women who said they had affairs with Trump. She said that “one story said” that Trump didn’t know anything about the payments — without noting that it was Trump who initially said that.

Still, she followed up when Trump didn’t answer. Trump said the payments didn’t come from his campaign, “they came from me.”

Earhardt also asked the president if he was considering pardoning Manafort.

That exchange caused Earhardt problems when she made an appearance on Sean Hannity’s prime-time show Wednesday night promoting the interview. She said to Hannity that Trump told her he would consider a pardon. “I think he feels bad for Manafort,” she said.

While Trump proclaims his “great respect” for Manafort in the interview, he skirted the question about whether or not he would pardon his former aide.

Her appearance with Hannity — Fox’s most emphatic Trump supporter — illustrated the pitfalls of mixing news and opinion. Earhardt praised Trump, calling him “very brave” for speaking to her. “We learned in journalism school, if someone constructs a narrative, you’ve got to defend yourself,” she said.

When she and Hannity talked about whether the midterm elections came up in the interview, Earhardt said that if Democrats win control of the House of Representatives, “their agenda is going to be to impeach. Because there’s no Russia collusion, at least so far. So what’s the next step? If they hate you so much, what are they going to do?”

When she interviewed Trump, her question was much simpler: “If the Democrats take back power, do you believe they will try to impeach you?”

Earhardt also asked Trump about the murder of Iowa college student Mollie Tibbetts. The government says the suspect is a Mexican in the country illegally; his lawyers say that’s not true. Either way, Fox has given the story much attention — prompting an argument on Fox’s air Wednesday between Juan Williams and Greg Gutfeld about whether it was being emphasized to divert people from bad news on Trump.

To be fair to Earhardt, she was caught for this interview between apocalyptic expectations and an audience filled with people who love Trump and hate journalists. Earlier this week, MSNBC’s Mika Brzezinski said that Fox faced a challenge: “Are they going to ask the real questions or are they going to aid in his deflections?” she said.

A low point for Earhardt was asking Trump, “is the press the enemy of the people?” instead of challenging that claim and not trying to stop his long, rambling answer.

One question that might be considered a softball instead provoked a revealing answer, when Earhardt asked what grade he would give himself as president so far.

“I give myself an A plus,” Trump responded.