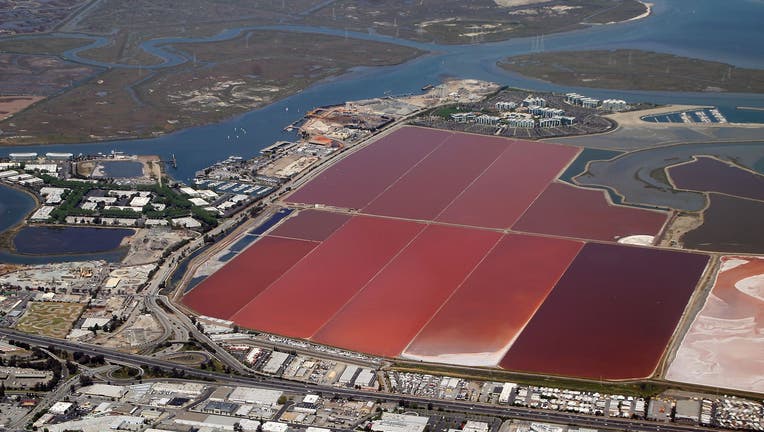 The Redwood City, Calif. salt ponds adjacent to San Francisco Bay on April 19, 2009. The 1,365-acre area is filled with tidal pools, marshland, and commercial salt mining operations. The ponds are inside the intersection of Highway 101 and Seaport Bo

SAN FRANCISCO - The U.S. Environmental Protection Agency on Friday backed down from its stance that the Redwood City salt ponds are not protected by the Clean Water Act, signaling a change in the Biden administration's direction on environmental issues.

The EPA withdrew its appeal of a federal judge's finding that the agency had mistakenly determined that the salt ponds were not part of the "waters of the United States."

The EPA's determination was significant because "waters of the United States" are subject to the Clean Water Act which, among other things, requires developers to obtain permits before dredging or filling.

An affiliate of Cargill, a large privately held multi-national food corporation, owns the salt ponds and proposed to develop the property.

The EPA's change of direction appears to be another instance of the Biden administration's different stance on environmental issues than that of the Trump administration.

In his October, 2020 opinion, U.S. District Judge William Alsup determined that the EPA ignored its own interpretative regulations and misinterpreted relevant case law. The judge vacated the determination and sent the case back to EPA to reconsider under the correct standards.

The EPA and Cargill appealed the decision to the 9th Circuit Court of Appeals.

The EPA's 2019 determination was challenged by Xavier Becerra, Attorney General of California, and group of environmental organizations including Save the Bay and San Francisco Baykeeper.

Sejal Choksi-Chugh, executive director of San Francisco Baykeeper, said in a statement Friday that "EPA's decision to abandon the Trump administration's nonsensical appeal is a victory for the Bay and a win for common sense.... The ponds are wet, they're connected to the Bay, and therefore require Clean Water Act protection."

Choksi-Chugh added, "The only thing more misguided than pretending that water is really land is to build on land that's really water. This decision could save the Bay Area future heartache when climate change causes sea levels to rise and flood such low-lying areas and anything that could be built upon it."

The Redwood City salt ponds are filled with levees and dikes constructed for use in salt mining operations. Salinized water fills a series of evaporation pools that result in salt deposits that can ultimately scraped out and sold commercially.

The dispute turned on whether the fact that the salt ponds were set off from the Bay itself by the development of a system of levees and dikes made them no longer part of the navigable waters of the Bay.

"The salt ponds here have not been dry and have had continuing connections to the Bay," Judge Alsup wrote. Based on that, the EPA was wrong to have determined they were not part of the navigable waters of the Bay.

EPA's withdrawal of the appeal may not resolve the matter; Cargill's counsel said Friday in a statement "we do not intend to withdraw our Notice of Appeal."