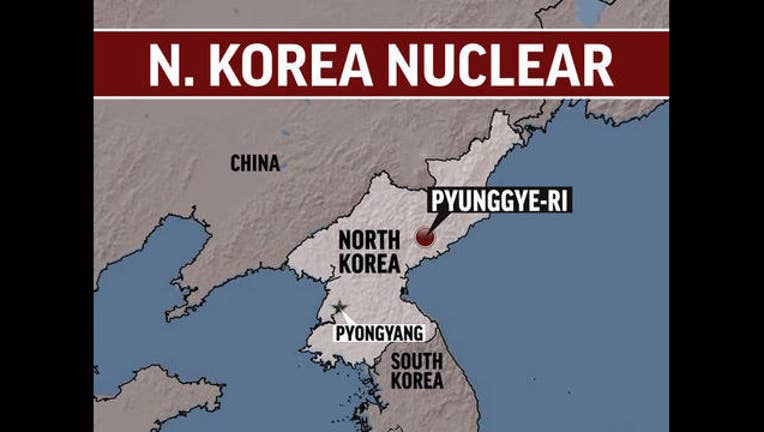 North Korea's leader Kim Jong Un went ahead with the launch just two hours after an eight-day window opened early Sunday, and a month after the country's fourth nuclear test. He ignored an appeal from China, its neighbor and important ally, not to proceed and in another slap to Beijing, he chose the eve of the Chinese New Year, the country's most important holiday.

Since its Jan. 6 nuclear test, which the North claimed was a powerful hydrogen bomb but experts believe was not, China and the United States have been negotiating the text of a new Security Council sanctions resolution.

The U.S., backed by its Western allies, Japan and South Korea, wants tough sanctions reflecting Kim's defiance of the Security Council. But diplomats say China, the North's key protector in the council, is reluctant to impose economic measures that could cause North Korea's economy to collapse.

The 15-member Security Council strongly condemned the launch and pledged to "expeditiously" adopt a new resolution with "further significant measures" -- U.N. code for sanctions. The word "robust" referring to the measures was in an initial draft, but was dropped in the final statement.

U.S. Ambassador Samantha Power told reporters that "it cannot be business as usual" after two successive North Korean acts that are "hostile and illegal."

"What's important is that the Security Council unites," Power said. "China is a critical player. ... We are hopeful that China, like all council members, will see the grave threat to regional and international peace and security, see the importance of adopting tough, unprecedented measures, breaking new ground here, exceeding the expectations of Kim Jong Un."

He said a new resolution should "do the work of reducing tension, of working toward denuclearization (of the Korean peninsula), of maintaining peace and stability, and of encouraging a negotiated solution."

"I believe the council needs to work together for a new resolution," Liu added, indicating that China may want negotiations with the United States to be widened.

Russia's U.N. ambassador, Vitaly Churkin, whose country is also a North Korean ally, said: "It has to be a weighty resolution, but it also has to be a reasonable resolution" that doesn't lead to North Korea's economic or humanitarian collapse, or further heighten tensions.

Russia's goal is to see six-party talks aimed at denuclearization resume, he said, but in the current atmosphere that's unlikely because the North Koreans "have been very unreasonable" and are challenging the entire international community.

"We think this is wrong for their national interests ... for the Korean peninsula ... for the region," Churkin said.

North Korea, which calls its launches part of a peaceful space program, said it had successfully put a new Earth observation satellite, the Kwangmyongsong 4, or Shining Star 4, into orbit less than 10 minutes after liftoff, and vowed more such launches. A U.S. official said it might take days to assess whether the launch was a success.

Japan's U.N. ambassador, Motohide Yoshikawa, told reporters the missile went over Japan and landed near the Philippines, "a clear threat to the lives of many people."

The Security Council underscored that launches using ballistic missile technology, "even if characterized as a satellite launch or space launch vehicle" contribute to North Korea's development of systems to deliver nuclear weapons and violate four Security Council resolutions dating back to the North's first nuclear test in 2006.

North Korean rocket and nuclear tests are seen as crucial steps toward the North's ultimate goal of a nuclear-armed missile that could hit the U.S. mainland. North Korea under Kim Jong Un has pledged to bolster its nuclear arsenal unless Washington scraps what Pyongyang calls a hostile policy meant to collapse Kim's government.

In a development that will worry both Pyongyang and Beijing, a senior South Korean Defense Ministry official, Yoo Jeh Seung, told reporters that Seoul and Washington have agreed to begin talks on a possible deployment of the THADD missile-defense system in South Korea. North Korea has long decried the 28,500 U.S. troops stationed in South Korea, and Beijing would see a South Korean deployment of THAAD, which is one of the world's most advanced missile-defense systems, as a threat to its interests in the region.

In a statement, North Korea's National Aerospace Development Administration, in typical propaganda-laden language, praised "the fascinating vapor of Juche satellite trailing in the clear and blue sky in spring of February on the threshold of the Day of the Shining Star." Juche is a North Korean philosophy focusing on self-reliance; the Day of the Shining Star refers to the Feb. 16 birthday of Kim Jong Un's father, former dictator Kim Jong Il. North Korea has previously staged rocket launches to mark important anniversaries.

South Korean President Park Geun-hye called the launch an "intolerable provocation," saying the North's efforts to advance its missile capabilities were "all about maintaining the regime" in Pyongyang and ignored the hardships of ordinary North Koreans.

Japanese Prime Minister Shinzo Abe vowed to "take action to totally protect the safety and well-being of our people." U.S. National Security Adviser Susan Rice called the North's missile and nuclear weapons programs "serious threats to our interests -- including the security of some of our closest allies."

U.S. Secretary of State John Kerry called the foreign ministers of South Korea and Japan and reaffirmed the United States' "ironclad commitment to the security and defense" of its allies, the State Department said.

The Foreign Ministry in China expressed "regret that, disregarding the opposition from the international community, the (North) side obstinately insisted in carrying out a launch by using ballistic missile technologies."

Noting China's pivotal role in negotiating a new Security Council resolution, Britain's deputy U.N. ambassador, Peter Wilson, said: "Today is Chinese New Year's eve and if I was a senior Chinese official I would be pretty annoyed at what's been happening here. I know what I feel like when I'm dragged out of bed on a major national holiday."

Kim Jong Un has overseen two of the North's four nuclear tests and three long-range rocket launches since taking over after the death of his father in late 2011. The U.N. Security Council prohibits North Korea from nuclear and ballistic missile activity. Experts say that ballistic missiles and rockets in satellite launches share similar bodies, engines and other technology.