A UPS driver was moved to tears after residents on his route threw him a thank you party and gifted him over $1000.

Dauphin, Pa. - A Pennsylvania UPS driver was moved to tears after being surprised by his regular clients with a "thank you" party and $1,000.

Video shared on March 2 shows a group of neighbors lining up to greet their UPS driver, Chad Turns, with a surprise party to thank him for his services over the past year.

In the footage, people gather near a table adorned with balloons and goodies as Turns pulls up in his big brown truck. 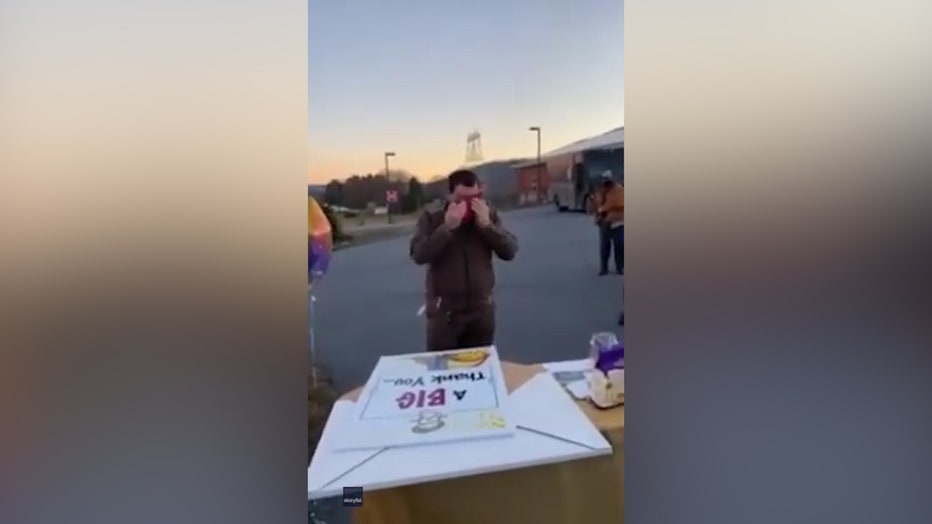 RELATED: Hundreds turn out to thank Virginia UPS driver for deliveries, kindness: 'He makes you feel like a friend'

Turns exits his truck and walks up to the table where he is met with a big "thank you" card that appears to be covered in messages thanking the driver for his impeccable deliveries amid an ongoing pandemic.

"Thank you," Turns is heard saying in the video. "You guys are really good to me."

Another woman appears in the video and reveals to Turns that not only were they giving him the card and goodies, but the group managed to gather more than $1,000 to gift to Turns as a bonus for the wonderful job he has done in a trying time.

"I appreciate everything that you guys are doing," Turns said tearfully. "I don’t know what else to say."

Turns pulls out a handkerchief to wipe away his tears as the group applauds and cheers for him.

Adam Shickley, who captured the video, said his wife Jenny organized the event on Facebook with the help of their local UPS office and dispatch.

RELATED: ‘I feel I’m the lucky one’: McDonald’s employee turns 100 years old with no plans to retire

The office sent Turns to an on-demand pickup as a ruse to get him to the event, according to reports.

Local media reported that Turns sometimes worked 70 hours per week to make sure the community received all their packages in time.