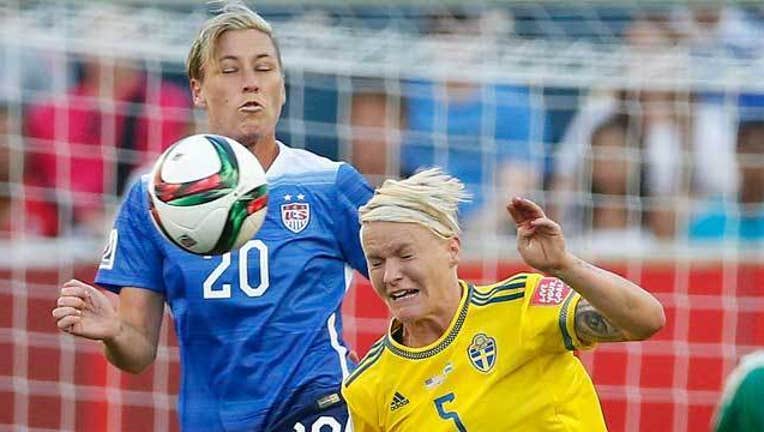 WINNIPEG, Manitoba (AP) — The United States played to a 0-0 tie with Sweden and former coach Pia Sundhage Friday night in one of the most anticipated matches of the group stage at the Women's World Cup.

Abby Wambach came off the bench in the second half, but her header in the 72nd minute was popped up and over the crossbar by Swedish goalkeeper Hedvig Lindahl.

A win would have assured the United States a spot in the knockout round as the Americans seek their third World Cup title, but first since 1999. The U.S. women advanced to the final four years ago in Germany, but fell to Japan on penalty kicks.

The United States, ranked No. 2 in the world, has one more group stage match, on Tuesday in Vancouver, British Columbia, against Nigeria. Sweden heads to Edmonton, Alberta, for its final group match with Australia. The monthlong tournament, with an expanded field of 24 teams, is being played across six Canadian cities.

The U.S. leads the Group D standings with four points, following a 3-1 victory over No. 10 Australia in the opener. Sweden was surprised in its opener by No. 33 Nigeria, which erased a 2-0 deficit at the half for a 3-all tie.

U.S. coach Jill Ellis tinkered with her lineup for the match against Sweden, starting 22-year old Morgan Brian while Wambach was on the bench.

Wambach did give the U.S. an immediate boost after entering in the 68th minute, but Lindahl kept the match scoreless. Liddahl was named the player of the match.

Some five mintues after Wambach's chance, Caroline Seger's hard shot from far out was saved by defender Meghan Klingenberg, who deflected the ball to the crossbar. Goal-line technology was used to make sure the ball never crossed the line on its descent.

The United States had a good chance in the 34th minute when Ali Krieger charged into the box but her shot to the far post went wide. Shortly after Hope Solo punched away Therese Sjogran's corner kick into a crowded box, Megan Rapinoe's free kick in the 39th minute sailed well over the goal.

Lindahl came up with her first big save of the match when she leaped to pop Carli Lloyd's shot up and over the bar early in the second half.

Solo leaped to stop Sjogran's hard shot from far out in the 54th minute but it sailed over her fingertips and over the bar.

Solo started in goal for the United States as off-field incidents continue to haunt her. The United States opened played the day after an ESPN report revealed new details about her arrest last June in Washington state on domestic violence charges. The charges were dismissed earlier this year.

Sundhage was head coach of the United States for five years, guiding the team to two Olympic gold medals and the World Cup final in Germany. It was the first time the Americans had advanced to the final since winning it all in 1999.

Sundhage left after the 2012 London Games and returned home to coach her native Sweden's national team.

Adding to the buildup for the match, one of the most anticipated of the group stage, was a story about Sundhage earlier in the week in The New York Times. In it, Sundhage was quoted as saying that Lloyd was a challenge to coach and she suggested she wouldn't start Wambach at this point in the popular veteran's career. She said Solo was one of the most challenging players she'd coached, "especially when it comes to trouble."

She talked about those statements before the match, saying the interview occurred back in April and she certainly was not trying to taunt the U.S. team. She called Solo "a piece of work," but went on to also call her the "the best goalkeeper in the world." She also said she would start Wambach on Friday night.

The World Cup is being played as FIFA deals with an ongoing corruption scandal sparked by the U.S. Department of Justice indictment of 14 people with racketeering, wire fraud, money laundering and other offenses. Swiss prosecutors are leading a separate probe into the 2018 and 2022 World Cup bidding contests.

FIFA President Sepp Blatter, who is not at the tournament, announced last week that he plans to step down once an election is held for a successor.