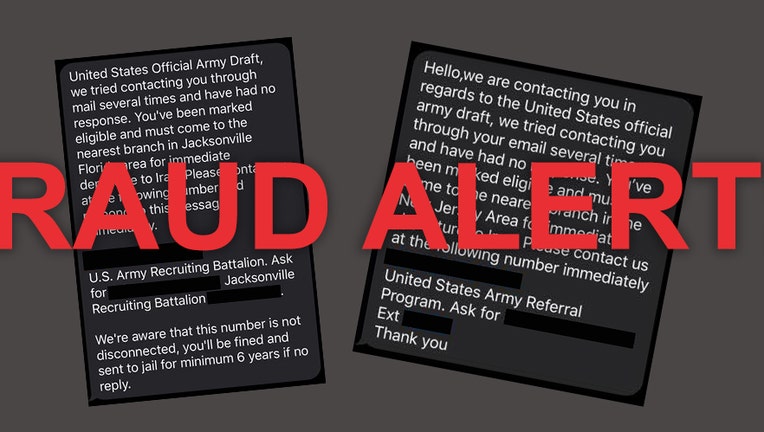 OAKLAND, Calif. (KTVU) - The U.S. Army is alerting the public about fake text messages circulating around informing people that they have been drafted into military service.

The fraudulent texts advise recipients to report to the nearest recruiting branch and if they don't respond they risk being "fined and sent to jail for a minimum 6 years," according to FOX 61.

U.S. Army Recruiting Command said it has received multiple calls and emails regarding the messages and wants to ensure Americans the texts aren't credible.

Screenshots of the messages read, "we tried contacting you through mail several times and have had no response."

The messages come at a time when tensions are high between Iran and the U.S. after the killing of Revolutionary Guard Gen. Qassem Soleimani at the order of President Trump. Last week, Pentagon deployed more than 3,000 additional troops to the Middle East to prepare for possible revenge attacks.

On Tuesday, Iran made its retaliatory move. The country fired a series of ballistic missiles at two military bases in Iraq housing American troops. Many have questioned whether the actions from both sides will spark a war.

There hasn't been a draft since 1973 and the military has operated as an all-volunteer force since then.

Registering for the Selective Service does not mean you are eligible or enlisted into the military, the branch said.