Americans received a grim reminder that the country is still in throes of the pandemic as the death toll reached a new milestone Tuesday.

More than 600,000 Americans have died of COVID-19 since the onset of the pandemic, according to data collected by Johns Hopkins University.

At this reported death toll, the United States has amassed the most deaths around the globe — far outpacing Brazil, whose 488,000 deaths are second-most in the world.

At more than 33.4 million, the U.S. also leads the world in confirmed cases. India’s recent surge in cases has pushed the south-Asian nation much closer, with more than 29.3 million cases.

Even so, data indicates the status of the pandemic is improving. The U.S. reached 500,000 deaths in late February and needed nearly four months to accumulate another 100,000.

During the winter surge, America tallied 100,000 deaths in just a month. 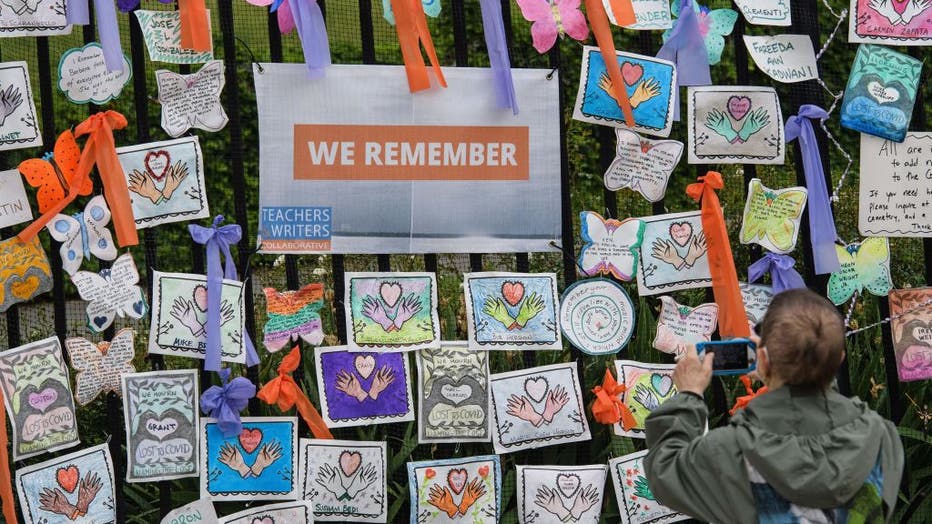 A person takes a picture at the "Naming the Lost Memorials" installation to remember the lives lost due to the coronavirus pandemic at The Green-Wood Cemetery on June 11, 2021 in New York City. - An estimated 600,000 Americans have died from Covid-19

The FDA-authorized vaccines have proven to be the difference-maker. They became available amid the winter surge and helped drive the case numbers down.

More importantly, they drove down the hospitalization and death rates, alleviating the stress placed on the country’s health care system.

Though the U.S. amassed more cases and deaths than any other country, its robust vaccination push has allowed for some pre-pandemic norms to return.

The CDC no longer asks fully-vaccinated Americans to wear masks in most settings. Sporting events are allowing more spectators. Airlines are no longer blocking middle seats.

President Joe Biden set a goal to reach 70% of the population receiving at least one dose of the vaccine by July 4. It appeared well within reach in mid-April when the U.S. was vaccinating more than 3 million people per day.

But the vaccination process has slowed to a crawl in recent weeks. Those eager to receive the vaccine have already received it, leaving officials looking for ways to convince the hesitant to roll up their sleeves.

Many states and businesses incentivized the shots with lottery entries, discounts and freebies. Health experts are eager to vaccinate as many adults as possible because vaccines still aren’t authorized for small children.

And the longer herd immunity evades the population, the more chances the virus has to mutate. So far, the vaccines have proven effective against the existing varients.

But experts worry a variant may eventually develop that can evade the vaccine altogether.