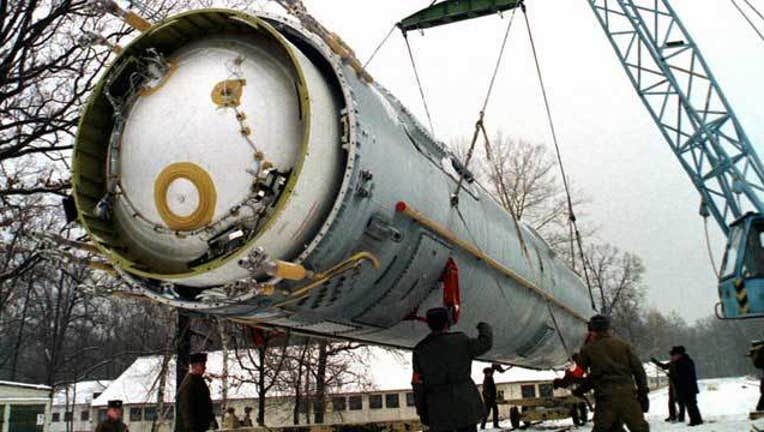 WASHINGTON (AP) — The Obama administration is weighing a range of aggressive responses to Russia's alleged violation of a Cold War-era nuclear treaty, including deploying land-based missiles in Europe that could pre-emptively destroy the Russian weapons.

This "counterforce" option is among possibilities the administration is considering as it reviews its entire policy toward Russia in light of Moscow's military intervention in Ukraine, its annexation of Crimea and other actions the U.S. deems confrontational in Europe and beyond.

The options go so far as one implied — but not stated explicitly — that would improve the ability of U.S. nuclear weapons to destroy military targets on Russian territory.

It all has a certain Cold War ring, even if the White House ultimately decides to continue tolerating Russia's alleged flight-testing of a ground-launched cruise missile with a range prohibited by the treaty.

Russia denies violating the treaty and has, in turn, claimed violations by the United States in erecting missile defenses.

It is unclear whether Russia has actually deployed the suspect missile or whether Washington would make any military move if the Russians stopped short of deployment. For now, administration officials say they prefer to continue trying to talk Moscow into treaty compliance.

In public, administration officials have used obscure terms like "counterforce" and "countervailing strike capabilities" to describe two of its military response options, apparently hoping to buy time for diplomacy.

The Pentagon declined to make a senior defense policy official available to discuss the issue. A spokesman, Lt. Col. Joe Sowers, said, "All the options under consideration are designed to ensure that Russia gains no significant military advantage from their violation."

At his Senate confirmation hearing in February, Defense Secretary Ash Carter noted his concern about Russia's alleged violation of the 1987 Intermediate-range Nuclear Forces, or INF, treaty. He said disregard for treaty limitations was a "two-way street" opening the way for the U.S. to respond in kind.

The standoff speaks volumes about the depths to which U.S.-Russia relations have fallen. And that poses problems not only for the Obama administration but also for the NATO alliance, whose members in eastern Europe are especially leery of allowing Russian provocations to go unanswered.

Western leaders are meeting Sunday and Monday for a G-7 summit — from which Russian President Vladimir Putin has been excluded — where Russian aggression will be a key topic. On Friday, Carter plans to meet in Germany with American defense and diplomatic officials to map out a counterstrategy to Russia's military intervention in Ukraine and to reassure allies worried about Moscow. The treaty issue is not a specific agenda item for Carter, but aides said regional nuclear force issues could come up.

The U.S. and its Western partners have tried to use economic and diplomatic leverage against Putin on a range of conflicts, including Ukraine. But they also recognize that Moscow still plays an important role in international affairs, including the nuclear talks with Iran that are among President Barack Obama's highest foreign policy priorities.

The administration is considering three options for responding militarily to Russian missile treaty violations: defenses to stop a treaty-violating missile, the "counterforce" option to attack a missile preemptively and the "countervailing strike capabilities" option that implies the potential use of nuclear forces.

One of Carter's nuclear policy aides, Robert Scher, testified in April that "counterforce" means "we could go about and actually attack that missile where it is in Russia." Another Pentagon official, Brian McKeon, testified in December that this option involved potential deployment in Europe of ground-launched cruise missiles.

Scher said another option would involve "not simply attacking" the Russian missile but seeing "what things we can hold at risk within Russia itself." Hans Kristensen, a nuclear weapons expert at the Federation of American Scientists, said this could mean further improving the ability of U.S. nuclear or conventional forces to destroy Russian military targets in addition to missiles deemed to violate the INF treaty.

Kristensen said the public discussion of these options amounts to "one hell of a gamble" that Putin will back down on INF.

The Obama administration has been relatively gentle in poking Moscow publicly on the INF issue. The State Department's top arms control official, Rose Gottemoeller, has called the alleged Russian violations a "very grave concern." In December she argued against declaring the treaty dead, saying America's allies also are opposed to that approach.

The State Department said last July that Russia had tested a missile in violation of the treaty, which bans indefinitely the possession, production and flight-testing of missiles — both nuclear and conventional — with ranges between 500 and 5,500 kilometers (310 and 3,410 miles)..

The administration has not said whether it believes the Russian missile is nuclear or conventional. But Carter said, in responses for his confirmation hearing, "Russia's INF treaty violation is consistent with its strategy of relying on nuclear weapons to offset U.S. and NATO conventional superiority."

Much about the subject is classified, including a Pentagon assessment of the threat posed by Russian violations.

The Associated Press was given an unclassified portion of a report written by the office of Gen. Martin Dempsey, chairman of the Joint Chiefs of Staff, that examines weapons the U.S. could develop and deploy if freed from INF treaty constraints.

It identified four such weapons that "could assist in closing ... a capability gap."

Among the four are ground-launched cruise missiles deployed in Europe or Asia, and ground-launched intermediate-range ballistic missiles equipped with technology that adjusts the trajectory of a warhead after it re-enters Earth's atmosphere and heads for its target.

The prospect of returning U.S. medium-range missiles to Europe recalls some of the darker days of the Cold War when Washington's NATO allies hosted U.S. ground-launched cruise missiles and Pershing 2 ballistic missiles, countering Soviet SS-20 missiles. The U.S.-NATO response prompted a Europe-wide protest movement, followed by U.S.-Soviet negotiations leading to the INF treaty, the first to ban an entire class of missile.