There are new details on the death of USF student Chris Liang.

SAN FRANCISCO - Christopher Liang, the 21-year-old University of San Francisco student whose body was found in a ravine earlier this month, died doing what he loved to do: Taking a road trip on his own in a Tesla Model 3.

"One of the things he loved was consumer technology," his 23-year-old brother, Jerry Liang, told KTVU on Monday, after his younger brother was found dead in a dry riverbed outside on Panoche Road off Interstate 5 near the Tesla supercharging station in Firebaugh, Calif. "He loved iPhones. He loved like laptops. He loved Android phones. And he also loved electronic cars because there were sort of like a blend of vehicles and technology. And so he was actually extremely excited about this Tesla, and he thought that the Autopilot feature would help him go down south."

Despite having a memorial for his brother at St. Ignatius Church last week in San Francisco, Jerry Liang - and his parents and sister in China – still do not officially know how Chris died.

The official cause of death has not been revealed, according to Jerry Liang.

"It's going to take like a month or so until we exactly know what happened," he said. "I think they're taking a look at the black box. I personally don't think it's the autopilot. But then again, I'm not an investigator. And I guess it would be irresponsible for me to jump at any conclusions."

For now, Jerry Liang is left with memories of Chris – who took off from San Francisco en route to Irvine on Feb. 28 to visit friends and "reconnect with a girl he was interested in."

Jerry Liang had called the trip "impulsive" and had tried to talk his younger brother out of it, mostly because he hadn't had much experience driving, especially on long trips. 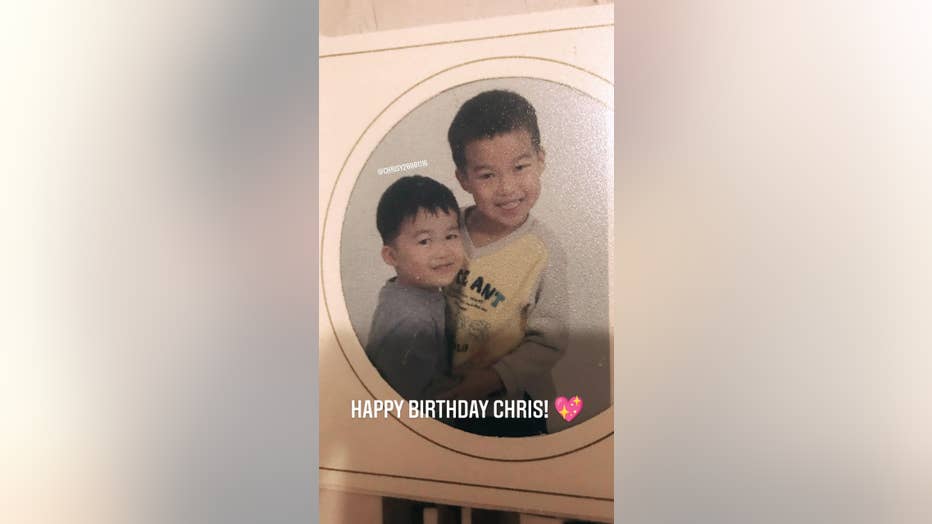 Chris Liang, pictured with his other brother, Jerry Liang (right.)

Jerry Liang had first thought he would like his parents and sister to come to the Bay Area to help say goodbye to Chris in California. The two brothers hadn't seen their family in China since before the pandemic.

But then Jerry Liang realized how expensive and difficult that would be, especially with China's laws on the pandemic and quarantine.

Now, he's raising money to fly back to China to be with his family in about three months.

Throughout this ordeal, Jerry Liang has been the one to post a viral Instagram post, asking anyone to help find his brother, and then deal with all the funeral and flight arrangements.

He's tried to find some silver linings through this tragedy.

The biggest one was seeing how many people came to help.

His cousin, Yale Zhang, actually flew into San Francisco from New York to aid him. His cousin is actually the founder of a company and decided not to attend a product demo in order to search for Chris in Southern California. Zang's sister also joined the effort.

"They drove me down to where Chris could have been to do an investigation," Jerry Liang said. "That was very sweet of him."

Jerry Liang's company, Databricks, reshared his post, and through that, a private investigator offered to pitch in.

"We basically traced my brother all the way down to the road that he died on, except when we searched the road, we didn't find him," Jerry Liang said. "I'm kind of grateful that I didn't find his body."

He did get a call the next day from the coroner, though, alerting him that Christopher had been found.

Jerry Liang and his younger brother had not always gotten along perfectly.

"He was sort of a challenging person to deal with," Jerry Liang said, "and I think he came to be such a person due to the difficulties he had experienced during his upbringing."

But before his brother died, Jerry Liang said he was able to connect with his brother and share his "love and truth" with him as much as he could.

"In the last six months of his life, I kept on trying to better communicate with him, relate to him and try to understand him better," Jerry Liang said. "We spent some really good time together and we basically talked through all the friction and gripes we had with each other. We had a lot of joy and healing. And when I think about this trip, I think about how he passed away doing what he loved to do."