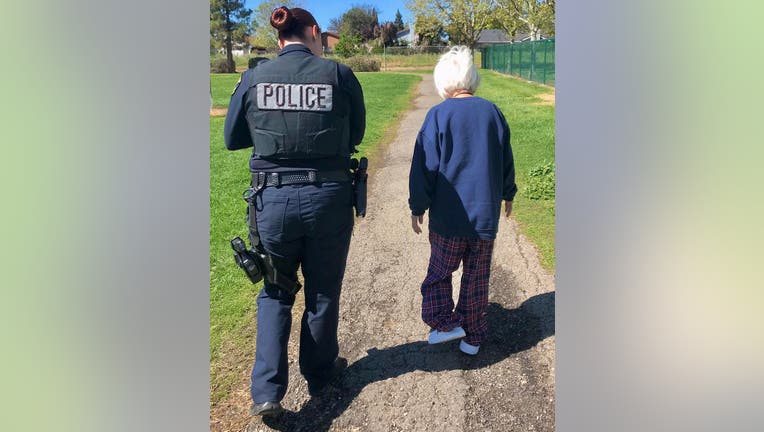 Vacaville police on March 21, 2022, shared this photo of one of its officers walking with a woman who was found wandering on a busy street. The post triggered a community discussion on the difficulties faced when caring for a loved one with dementia.

VACAVILLE, Cailf. - The Vacaville Police Department has received praise and triggered a compassionate, community discussion on the heartbreaking realities of caring for a loved one with dementia.

On Monday, the department posted a touching photo of one of its officers walking with an elderly woman who had been found wandering onto a busy street and into parking lots.

Police said an alert community member had noticed the woman and went over to help her to safety.

"The community member stopped to help and recognized the elderly woman was a neighborhood member who was displaying signs similar [to] those she’d seen in her own grandmother who suffered from dementia," police shared, adding that it prompted the community member to call police.

Officers arrived and were able to quickly identify the woman, thanks to a necklace she wore which included her contact information. They went on to notify a relative who worked nearby, police explained.

While waiting for the woman’s relative to arrive, an officer took the opportunity to go the extra mile.

"... the officer volunteered to continue to walk through the park with the woman to help keep her at ease while they waited," police said. "As they walked, the officer chatted with the senior and she spoke about her favorite foods, how much she loves dogs, and how she just wanted to go home."

For many local law enforcement agencies, their officers were no strangers to these situations, as they’re often called on by desperate family members trying to locate a loved one suffering from memory loss due to dementia.

These sensitive and stressful events were not lost on the Vacaville Police Department as it offered some insight, providing a compassionate look into the subjects of these all too common cases.

"Imagine: You’ve lived a long, joyous life. You’ve seen the world change through so many decades," the department shared in its post. "But now, the destructive powers of dementia are slowly robbing you of those precious life memories, and you occasionally find yourself wandering around, unsure exactly of where you are or where you’re headed."

The Facebook post received more than 1.6K likes and a huge response from community members, many who could relate.

"With tears in my eyes and losing my mother to a horrendous case of dementia thank you so much for taking care of this lady with loving kindness it’s the only thing that works when things start going this way," Cathy Gentry-hendricks wrote in the post's comments.

Facebook user Luke Witthar shared, "I'm going through with that with my mother right now. She'll call me at work and ask me what day it is and what time it is. Is so hard on a family."

Kay Johnson Nelson expressed appreciation for the care taken to help the distressed woman. "Most grandmas have spent their lives caring for family and others. It's so good to see family and community caring for our elderly members," she wrote.

Police also used the post to offer this safety tip for families who have a loved one dealing with memory loss: "If you have an elderly family member that is at-risk of becoming lost or disoriented, a necklace or bracelet with helpful information is a major resource for any Good Samaritans or first responders working to help," police shared.

And to those who praised the department for its efforts, police returned the expression of gratitude to the community, noting the effort was a collective one.

"There are a ton of wonderful people in our community, and it's always nice to share a story that reminds us about positive humanity," the department responded, also saying, "Our community members prove time and time again that they are willing to look out for and help one another."