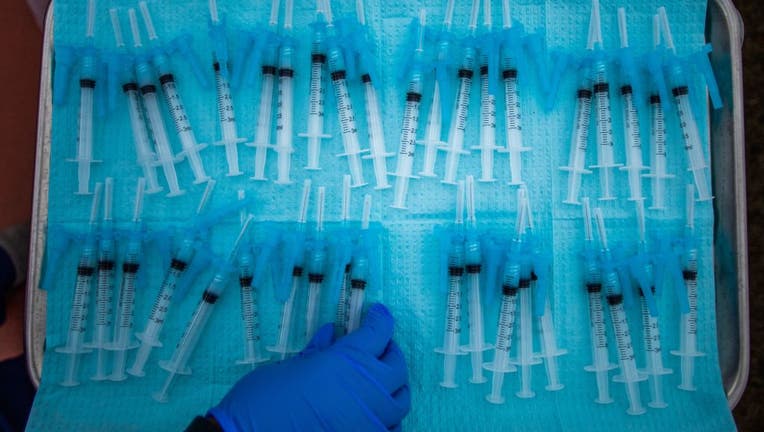 A nurse takes a Moderna Covid-19 vaccines ready to be administered at a vaccination site at Kedren Community Health Center, in South Central Los Angeles, California on February 16, 2021. (Photo by Apu GOMES / AFP) (Photo by APU GOMES/AFP via Getty Im

SAN FRANCISCO - Hearing of excess vaccine and unfilled appointments frustrates Dr. Aaron Roland, a family physician who has been lobbying for doses to inoculate his patients, many of whom are low-income, immigrants or elderly.

The San Francisco Bay Area doctor has more than 200 patients who have inquired when he will offer inoculations against the coronavirus. One patient, who is 67, said he walked into a Safeway supermarket because signs said doses were available.

"But they said, ‘Oh no, they’re not really available. You just have to go online, just sign up online.' It’s not something he does very easily," said Dr. Roland, whose practice is in Burlingame, south of San Francisco.

California, swimming in vaccine, is in far better shape than just weeks ago when scoring an appointment was cause for celebration. Today, Los Angeles, San Diego and other populous counties are advertising that anyone can walk in for a shot, and the state is texting reminders that plenty of appointments are available. Rural Humboldt County even declined 1,000 extra doses last week due to lackluster demand.

More than 18 million of an estimated 32 million people eligible for vaccine in California are fully or partially vaccinated, including nearly half of people in economically vulnerable ZIP codes hardest hit by the pandemic and 73% of residents 65 and older. The country's most populous state, like much of the U.S., appears to have hit a vaccine plateau.

The dwindling demand for vaccines illustrates the challenge that the U.S. faces in trying to conquer the pandemic, even as other countries are in the midst of full-blown medical emergencies and short on vaccine.

But that doesn't mean everyone in California who wants a vaccine can get one — as some of Dr. Roland's patients can attest.

Marlies Mokhtarzadeh was turned away from a downtown Millbrae pharmacy offering the one-shot Johnson & Johnson vaccine by a clerk who told her to make an appointment online.

But Mokhtarzadeh, 80, isn't able to do that and her granddaughters have also failed to book her an appointment. She’s worn down by repeated attempts to get a slot through a toll-free number, so she’ll wait for Dr. Roland, her physician of three decades, to get the vaccine instead.

"I’m not a young girl," she said. "I’m trying to find somebody that will give me the shot and they have it at the Walgreens in Millbrae and I don’t know why they won’t give me the shot."

Going forward, it's going to take more effort to reach the unvaccinated, say health experts. The group includes people unable to leave their homes or who can't miss work; for some, a vaccination may not be a priority, or they may have questions that can't be answered when making a vaccination appointment online.

"We want to reach all people, and what happens at this point in the process is each person we try to reach becomes a little harder to reach," said Dr. Kirsten Bibbins-Domingo, epidemiology and biostatistics chair at the University of California, San Francisco. "It's not as easy as putting up a mass vaccination site and saying if you build it, they will come."

Counties, cities and providers nationwide are turning to paramedics to deliver in-home shots or arrange transportation to vaccination sites, even offering incentives to try to reach as many people as possible. Like California, many states also have more doses than arms to put them in.

Families Together of Orange County, a community health center where more than half the patients are Latino, is hitting shopping centers, supermarkets, restaurants and schools, said CEO Alexander Rossel.

Marin is among the counties phasing out mass vaccination sites in favor of smaller mobile clinics. Santa Cruz County has restarted a medical "strike team" to reach people who need in-home inoculations.

But finding who needs help and where they live isn't easy. "There’s no great list of them," said Jason Hoppin, a county spokesman.

State officials are expected to soon release more guidance on at-home inoculations to get more people vaccinated as it works to add providers to its list. Insurer Blue Shield took over state administration of the vaccine March 31.

Dr. Roland's practice was authorized to inoculate patients against COVID-19 in late February, but has been unable to get vaccine from San Mateo County or Blue Shield. County spokesman Preston Merchant said with constrained supplies, providers need to get it from Blue Shield.

People who are caring for their 96-year-old mother, who got inoculated elsewhere, and the grandmother of a severely disabled adult are among those seeking vaccination from Roland. They’re not computer literate and he can hardly tell them to continue checking the numerous pharmacy, hospital, county and state websites offering appointments.

"It’s good to have many different channels," he said. "But one of the places where it would be good to get a vaccine is from their doctor,"

As the state moves from a lack of vaccine supply to waning demand, family doctors are important in helping people overcome reluctance. Doctors who have relationships with their patients are more trusted than an anonymous person providing a shot, said Anthony York, a spokesman for the California Medical Association.

"If it doesn’t go there," she said, "we’re going to miss the opportunity to put a cap on this pandemic."