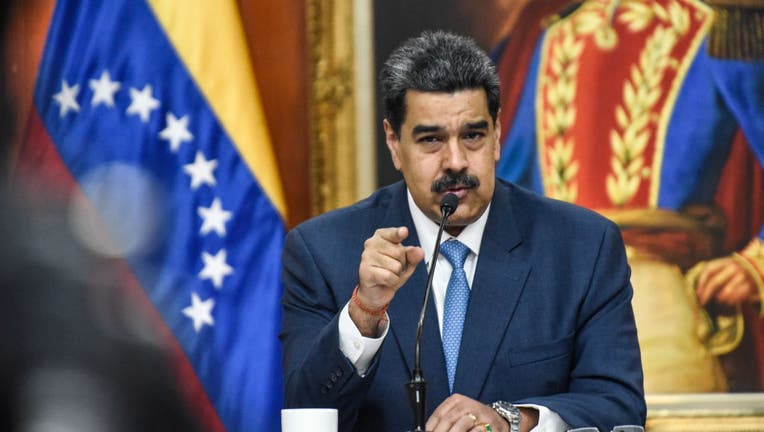 President of Venezuela Nicolas Maduro speaks during a press conference at Miraflores Palace on February 14, 2020 in Caracas, Venezuela. (Photo by Carolina Cabral/Getty Images)

MIAMI - Six American oil executives jailed in Venezuela more than three years ago on corruption charges were granted house arrest on Friday in a gesture of goodwill toward the Biden administration as it reviews its policy toward the politically turbulent South American country.

The partial release of the six employees of Houston-based Citgo was confirmed to The Associated Press by lawyers and family members of the men.

Tomeu Vadell, Jose Luis Zambrano, Alirio Zambrano, Jorge Toledo, Gustavo Cardenas and Jose Pereira were hauled away by masked security agents while at a meeting in Caracas just before Thanksgiving in 2017. They had been lured to Venezuela in order to attend a meeting at the headquarters of Citgo's parent, state-run oil giant PDVSA.

The so-called Citgo 6 were granted house arrest once before -- in December 2019 -- only to be re-jailed two months later on the same day that President Donald Trump welcomed opposition leader Juan Guaido to the White House.

In releasing the men, President Nicolás Maduro could be betting he'll receive a better hearing from President Joe Biden, who on the campaign trail called Trump's policy of regime change an "abject failure" that has served only to strengthen the socialist leader.

Earlier this week, senior Biden officials from several federal agencies were scheduled to meet to weigh U.S. options, including whether to ease up on crippling oil sanctions it inherited and take steps to support an uncertain attempt at dialogue between Maduro and his opponents, according to two people familiar with the plans.

However, the continued imprisonment of Americans is seen as a formidable obstacle to any outreach.

In recent weeks, former New Mexico Gov. Bill Richardson was among those working behind the scenes to press Maduro's government to release the men.

"This is a positive and important step that should help secure their wellbeing during the COVID-19 outbreak in Venezuela," said Richardson in a statement.

Richardson, who has opened back channels to hostile governments in Iran, Cuba and North Korea to win the release of some 40 Americans, vowed to work tirelessly to bring the men back home.

He also urged the release of Luke Denman and Airan Berry -- two former Green Berets who participated in a failed raid last year staged from neighboring Colombia -- and former U.S. Marine Matthew Heath, who is being held on unrelated allegations.