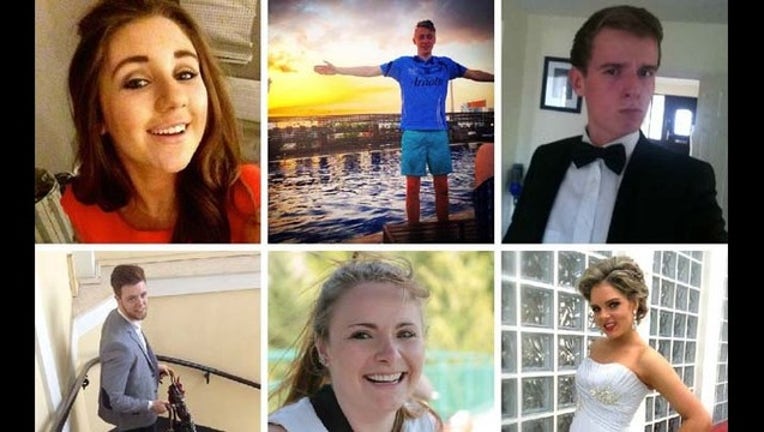 Flags flew at half-staff around Ireland and the country's parliament suspended normal business Wednesday as the nation mourned six students killed when a balcony collapsed during a party in Berkeley.

Prime Minister Enda Kenny offered a message of sympathy and books of condolences were opened at University College Dublin, where three of the students studied. Tributes were paid to the students, who were among 700 Irish students in the San Francisco Bay Area for the summer.

Burke, 21, was expected back at the Dun Laoghaire Institute of Art, Design and Technology, in September to start her final year of a degree in entrepreneurship and management.

Annie Doona, the institute's president, said Burke was working at a sushi restaurant and sharing an apartment with some of the others killed and injured in the Berkeley balcony collapse.

"She was doing very well, and enjoying herself and making great friends," Doona said. "It's terribly sad."

The school was providing psychological support for students on the campus, she said.

Culligan had finished his third year at the Dublin Institute of Technology, where he was studying logistics and supply chain management.

Ballyboden St. Enda's — the club where he played Gaelic football — posted a tribute to him.

"Eoghan was very popular with his teammates and this tragic news is keenly felt by all members of our Club, but especially by those players and mentors who knew him well," the club said. "We would like to extend our deepest sympathy to his parents Gerry & Marie and to his brothers Stephen & Andrew and to all the extended Culligan family."

A well-respected student when she attended Rancho Cotate High School, Donohoe took her passion for science to Sonoma State where she was a biology student. A prep soccer player, the 22-year-old returned to her high school campus to volunteer as an assistant soccer coach for at least two seasons.

Donohue, 22, was a first cousin of Burke.

Miller was studying medicine at University College Dublin. At his high school, St. Andrew's College in Booterstown, south Dublin, headmaster Peter Fraser recalled Miller as a "positive, engaging, decent boy who was incredibly talented, but normal, modest and balanced about it all."

Miller played on the school hockey team, sang in the choir, performed in musicals and took part in the school's Model United Nations.

"He was hugely popular," Fraser said.

Schuster, 21, was studying at University College Dublin and had been a student at St. Mary's College in the Rathmines district near the Irish capital. In 2010, he took part in the Ghana Immersion Project, which sends young people to the West African country, where they attend school with local students and help primary school students learn English.

Walsh, a medical student at UCD, was a high school classmate of Burke's at Loreto College in Foxrock, south Dublin.

The principal at Loreto described the two girls as smart and beautiful.

"They were in the prime of their lives," principal Bernadette Prendiville said. "They had a successful time in school, went about their work quietly and had everything going for them, everything ahead of them."

The Church of Our Lady of Perpetual Succour in Foxrock held a vigil Tuesday in the aftermath of the tragedy. Parish priest Frank Herron, who knows the Walsh family, told The Associated Press that the community is shocked and the family is distraught.

"She was very intelligent and had so much to offer," he said. "She really looked forward to going to the States with her friends and spending her summer there working and having time to be together. The community here felt very empty, so we opened up the church. We had a huge reaction of support and solidarity."