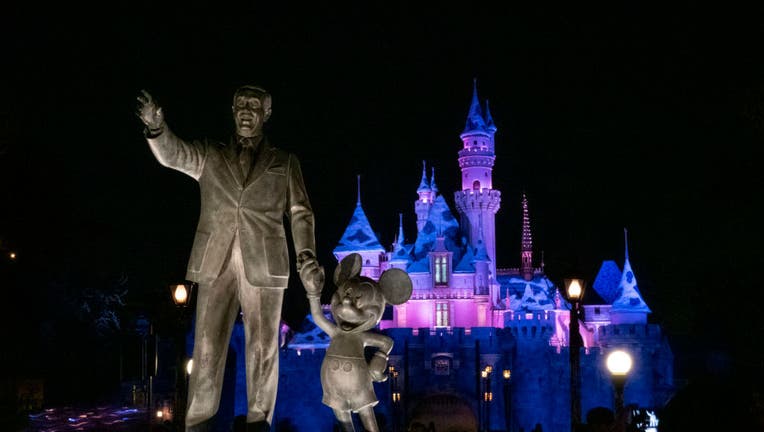 ANAHEIM, CA - JANUARY 13: A general view of the Walt Disney and Mickey Mouse statue in front of the Sleeping Beauty Castle lit up at night at Disneyland Park on January 13, 2020, in Anaheim, California. Opened on July 17, 1955, Disneyland is the only

ANAHEIM, Calif. - A video posted to social media shows the tense moments a fight broke out at the "Happiest Place on Earth," during Memorial Day weekend.

The video that was posted to Twitter on Saturday evening shows multiple people engaging in a fight at the Disneyland Park in Anaheim, while park security officers worked to stop the chaos at the family-friendly venue.

Terrified onlookers were seen trying to get their children away from the flying fists. In the video, it appears all the people involved in the altercation were captured by security.

"We do not condone this type of reprehensible behavior. Disneyland Resort security intervened swiftly, deescalated the situation and removed the guests from the park," a Disneyland official said in a statement to FOX 11.

A similar incident involving at least four relatives occurred in 2019 within the Mickey's Toontown section of the park in front of children.

SUGGESTED: WATCH: Violent brawl breaks out at Disneyland's Toontown in front of children

It's unclear what led to the violent altercation and no injuries were reported in the violent incident.

A single-park ticket starts at $134 for adults and goes up to $164 during the summer months. On Tuesday, Disneyland announced it is discontinuing all sales of its Magic Key Pass program and instead is offering a special limited-time ticket offer for California residents.