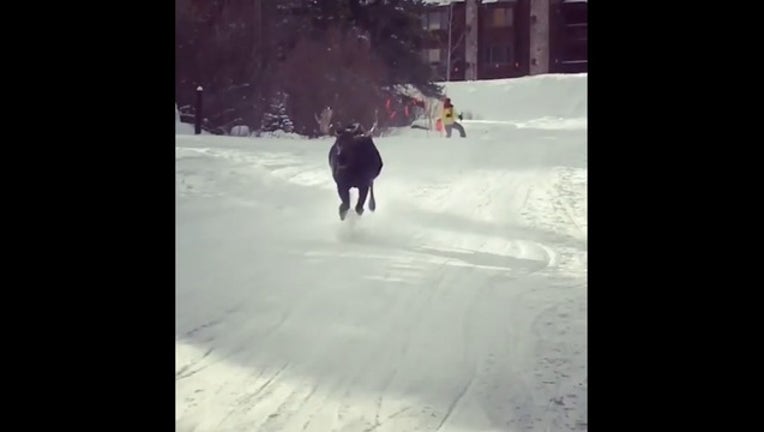 BRECKENRIDGE, Colo. (KTVU) - Some heart-pounding moments at a ski resort in Colorado when an agitated moose chased snowboarders down a slope.

Video captured the scene as the snowboarders came across the large bull moose on a trail, apparently getting a little too close for comfort.

The animal is seen approaching them and then starts charging, causing everyone on the slope to scramble to get out of its way.

Luckily no one was injured.

The video was recorded on Instagram by Lo Drogsvold, @Snolo.

In the post she joked, "Getting chased by a moose was never on the bucket list, but I’ll go ahead and check that one off anyways."

She went on to write, "But on a more serious note, moose are fast, aggressive and VERY dangerous. If you come across one on the slopes, in town, or in the wild, keep your distance and respect the wildlife." The post included the hashtag #LeaveTheWildWild.

Animal experts say moose are not typically considered aggressive but describe the animals as unpredictable and say they can get territorial and become aggressive if angered or startled.

People who come across the animal are advised to keep their distance from them.