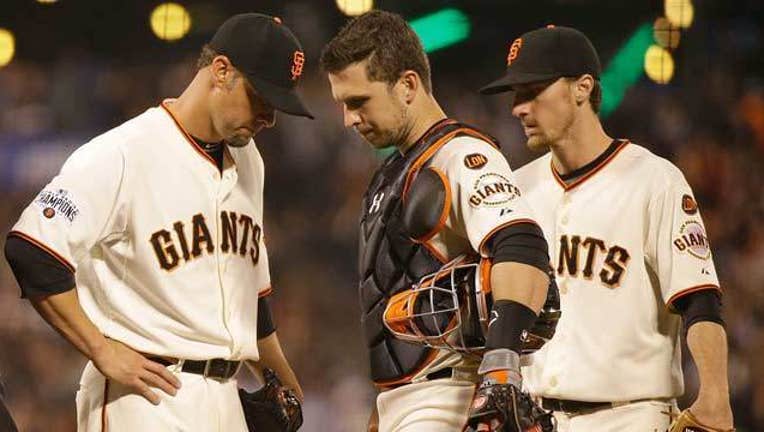 SAN FRANCISCO (AP) — Ryan Vogelsong had the dazzling defense behind him, the San Francisco Giants just failed to provide the run support to keep his winning streak going.

Vogelsong's four-game winning streak was snapped in a 4-3 loss to the Pittsburgh Pirates on Monday night, when Gerrit Cole struck out nine in seven innings to win his third straight start and take a share of the majors' wins lead

Andrew McCutchen had two likely hits stolen by great plays in the outfield as he settled for sacrifice flies against Vogelsong (4-3) instead.

Center fielder Angel Pagan made a running, diving backhanded catch on McCutchen's third-inning drive. Pagan, whose hat fell off in the process, hopped up and quickly released the throw. Right fielder Hunter Pence robbed McCutchen in the fifth, prompting the slugger to raise his hands in a signal of disbelief.

Neil Walker hit a tiebreaking two-run double in the fifth after a pair of called strikeouts.

Cole (8-2) struck out the side in order in the fourth, then worked a 1-2-3 fifth before loading the bases with none out in the sixth. He got out of it with a strikeout of Brandon Belt and inducing Brandon Crawford's inning-ending double play.

Nori Aoki scored on Pence's groundout in the eighth, then Mark Melancon finished for his 14th save.

The Giants, coming off a 21-9 May, have their first three-game losing streak since dropping a season-high eight in a row from April 10-17.

"A lot of good things happened. We had two plays in the outfield. Angel, that saved some runs along with Pence's play," manager Bruce Bochy said. "We made one mistake there. Against a guy like we faced tonight, you have to execute. We just couldn't quite do it but our defense saved us from letting that game get away."

Vogelsong lost for the first time in six starts since a defeat to Los Angeles on April 29 at Dodger Stadium, and the Giants had won each of the right-hander's last five and six of seven.

In the eighth, a man in an old-school Barry Bonds Pirates jersey reached over the low right-field wall and kept Gregory Polanco from catching a hard hit ball by Buster Posey. Pittsburgh manager Clint Hurdle requested a replay review and, after 2 minutes, 17 seconds, Polanco was credited for making the out.

"He hit me all over," Polanco said, gesturing to his hand and the left side of his face. "He said, 'I'm very sorry.' I said, 'It's OK, man.' He's trying to catch the ball, too. He wants the ball. It was strange. He was right there and I didn't see him before."

Belt's two-run, two-out double in the first put San Francisco ahead early in a rematch of the NL one-game wild card won 8-0 by the eventual champion Giants last October at PNC Park.

The Pirates-clad fan was removed from the stands.

"How about the irony that the game has and the guy had a Pirate jersey on. I don't know if he thought he could make the catch and hand it to Gregory or maybe help Gregory," Hurdle said. "It was the right call."

Hurdle tweaked his lineup to use lefty hitters high in the order with Polanco batting second and Walker cleanup. Walker came in 7 for 16 against Vogelsong and delivered in the fifth, leading Pittsburgh to its ninth win in 11 games.

Cole, making his first career start in San Francisco, allowed five hits and no earned runs to improve to 3-0 against the Giants. The right-hander is 12-2 with 120 strikeouts in 16 starts since Sept. 7 last year — the most wins in the majors in that stretch.

Pittsburgh took two of three games in both series the teams played in 2014. The Giants have lost 11 of 16 overall to the Pirates.

Giants: RHP Jake Peavy played catch to test his strained lower back and said he felt good. The plan is to throw a bullpen Tuesday. ... RHP Matt Cain (strained flexor tendon in elbow) pitched a bullpen.

Pirates: RHP A.J. Burnett (5-1) looks to win his sixth straight start. He is winless in his past two outings facing San Francisco but 6-3 overall. He also is 3-0 with a 1.89 ERA in six road starts this season.

Giants: RHP Chris Heston (5-3), who has pitched well in place of the injured Cain, tries to win his third straight start and fourth consecutive decision.