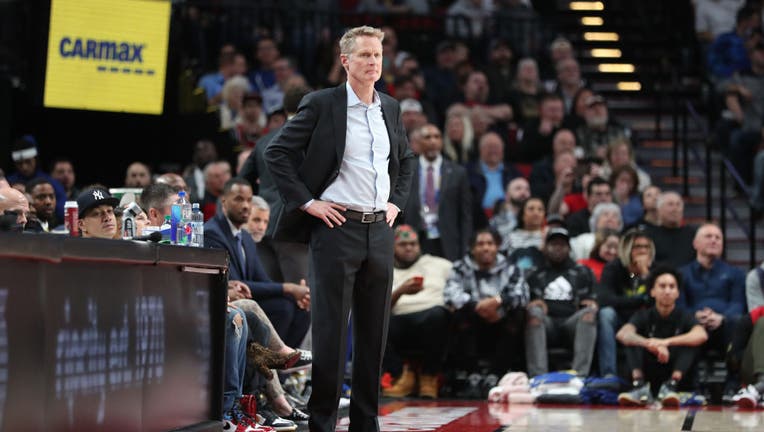 PORTLAND, OREGON - JANUARY 20: Head Coach Steve Kerr of the Golden State Warriors reacts in the third quarter against the Portland Trail Blazers during their game at Moda Center on January 20, 2020 in Portland, Oregon. NOTE TO USER: User expressly ac

SAN FRANCISCO - Golden State Warriors coach Steve Kerr cast his vote, then spent some of his own time Saturday morning greeting others who visited the ballot drop-off location at Chase Center.

Kerr handed out blue, Warriors-themed “I Voted” stickers to match the one on his gray sweatshirt.

“It's an easy way to vote, I just dropped my ballot off,” Kerr said. “We're trying to remind everybody not only of the importance of voting, but we're trying to make it as easy as possible to exercise your vote. It's important for everybody to have that right and to have easy access."

He posed for photos with fans, stood in for selfies and talked some basketball, too, of course. But most of all, Kerr wanted to support the early voters and encourage others to take to the polls as Tuesday's election nears.

The Warriors' former practice facility in downtown Oakland — now used for their youth camp operations — will be a voting place Tuesday.

“It’s just a good way for us as a company, as a team, an organization, to remind people we’re not just a basketball team. We’re hopefully an asset to the community and we want to be able to help people, and hopefully win a bunch of games in the process and keep everybody entertained, but we'd like to think that we're an important part of the community," Kerr said. “And we need to prove that by doing things like this.”

Members of Kerr's family also stopped by the first-year arena to turn in their ballots Saturday.

An outspoken NBA face on issues such as gun violence, police brutality and racial injustice, Kerr applauded the youth working to make positive change. He walked in an Oakland peace march this past spring.

His father, Malcolm, president of the American University of Beirut, was murdered in Beirut when Kerr was 18 and a freshman at the University of Arizona.

In March 2018, Kerr took part in the Oakland March for Our Lives. Earlier that same month, he joined Democratic Congressmen Ro Khanna and Mike Thompson — chair of the House Gun Violence Prevention Task Force — and students from throughout the South Bay during a town hall at Newark Memorial High School to discuss gun violence in schools and cheered the efforts of youth nationwide.

Kerr said it isn't hard to do double duty right now as a basketball coach and a voice as a public figure with a platform for those who don't have one.

“I think in some ways the balance is presented to us, given what's happening around the country,” Kerr said. “I know that when I played, players and coaches were never — maybe not never — rarely asked about politics and voting."

“But the times are different. Our country is in turmoil and everybody plays a role,” he said. "If we're truly a democracy, then ‘We the People,' that's the key phrase, right, in the Constitution, ‘We the People.’ So, who's that? That's us. It's not somebody making decisions for us, it's us making decisions about who we're going to elect to help lead our country.”