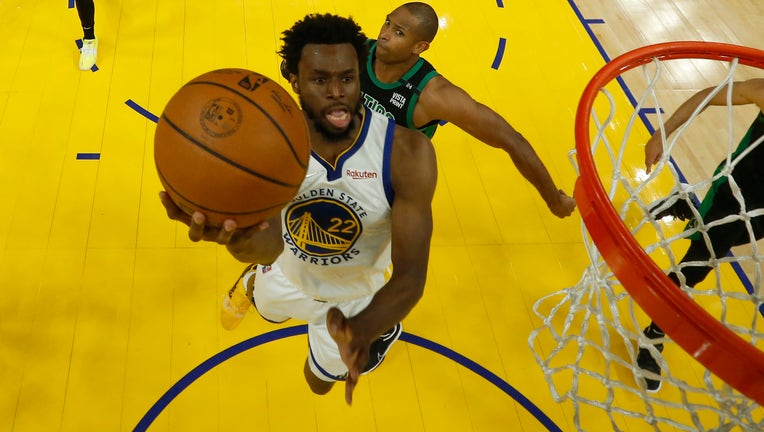 SAN FRANCISCO, CALIFORNIA - JUNE 13: Andrew Wiggins #22 of the Golden State Warriors drives to the basket against Al Horford #42 of the Boston Celtics during the first half in Game Five of the 2022 (Photo by Jed Jacobsohn - Pool/Getty Images)

SAN FRANCISCO - Exhibiting a determined confidence and grit all game, Andrew Wiggins single-handedly took the pressure off Stephen Curry and delivered the best game yet of his eight-year career.

Now, the first-time All-Star is on the cusp of becoming a first-time NBA champion — and helping Curry capture yet another title.

"It’s something I dreamt about for sure, being in the league, and this is the ultimate stage," Wiggins said on Monday night, speaking from Chase Center in San Francisco. "It doesn’t get bigger than this."

Wiggins had 26 points and 13 rebounds, Klay Thompson scored 21 points and the Golden State Warriors beat the Boston Celtics 104-94 for a 3-2 NBA Finals lead.

"Coming into this year, he was an All-Star starter for a reason," Draymond Green said. "... The bigger the challenge has been that we’ve thrown in front of him, the bigger he’s responded. You want a guy like that. When the stage gets big, they respond and play their best basketball, and that’s what he’s been doing."

One game after his 43-point performance, Curry contributed 16 points and eight assists but was 0 for 9 from 3-point range. The career 3-point leader’s NBA-record streak of 132 straight postseason games with at least one 3 ended, along with his NBA-best run of 233 consecutive games with a 3 between regular season and playoffs combined.

Green knows how Curry will respond: "He’s going to be livid going into Game 6. That’s exactly what we need."

Capping his brilliant performance on both ends, Wiggins drove through the lane for an emphatic one-handed slam with 2:10 left.

The Warriors can win their fourth title in eight years when the series resumes in Boston on Thursday night. If the Celtics can win at home, the series will return to the Bay Area for a winner-take-all Game 7 on Sunday. All five games so far have been decided by 10 or more points.