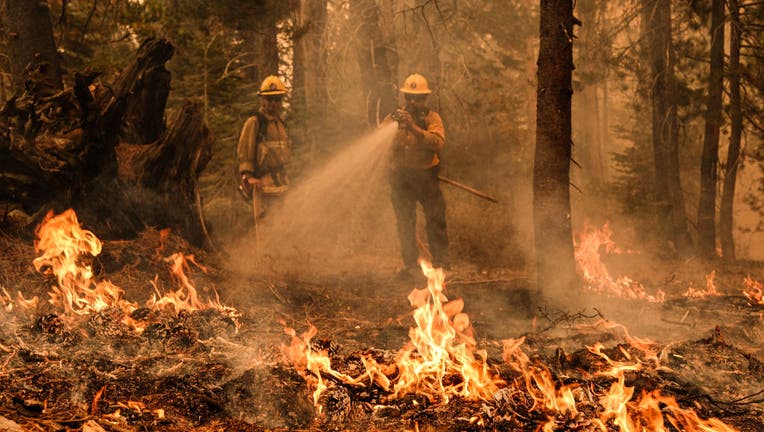 A firefighter attempts to extinguish a spot fire off Highway 50 during the Caldor Fire in Meyers, U.S., on Tuesday, Aug. 31, 2021. California's Caldor Fire moved closer to a popular alpine tourist destination in Northern California on Monday, prompti

LAKE TAHOE, Calif. - The Caldor Fire has crews scrambling to protect structures, but now officials are reporting an alarming new trend - evacuated residents who've left igarden hoses, sprinklers and other irrigation running to protect their proerties. The huge and constant demand on the municipal water supply is draining neighborhood water tanks and forcing pump stations to run at maximum capacity.

As a result, firefighters who are relying on the water supply to battle the flames in extremely dangerous conditions could run into situations where they are unable to draw an adequate flow of water from hydrants.

"The wide-scale activation of sprinklers and hoses dramatically reduces water pressure in the entire community," the Lake Tahoe Public Utility Districts said in a press release. "Firefighters apply water judiciously, where it makes a difference, and they need all the available water and water pressure during a fire. Evacuation preparedness efforts are better spent on removing combustible material away from homes."

"Hardening homes to ember intrusion is one of the most effective preparedness efforts residents can take to protect their homes in a wildfire," said North Tahoe Fire Chief Steve Leighton "We ask that you turn off any outdoor irrigation, roof sprinklers or hoses before you evacuate to ensure our firefighters have ample water and enough water pressure to safely fight the fire. Clear roofs of pine needles and leaf litter, remove combustible decorations, furniture and cushions from decks, and clear away any other combustible material to help prevent homes from catching fire."

If you are ordered to evacuate, click here for a helpful wildfire evacuation checklist.