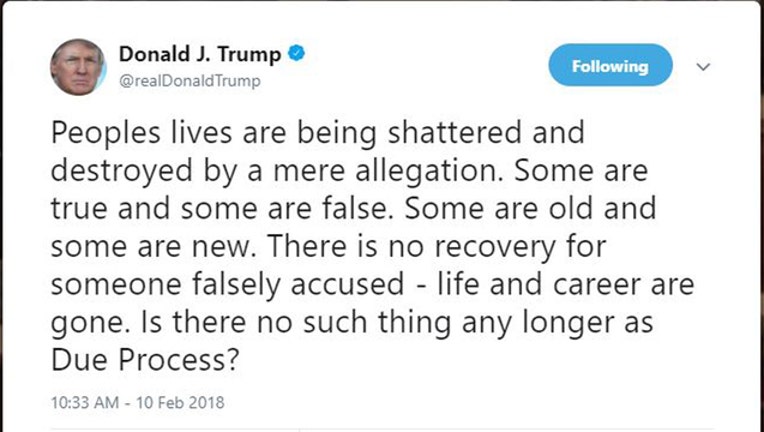 WASHINGTON - Reeling from the downfall of a senior aide, the White House was on the defensive Sunday, attempting to soften President Donald Trump's comments about the mistreatment of women while rallying around the embattled chief of staff.

Several senior aides fanned out on the morning talk shows to explain how the White House handled the departure of staff secretary Rob Porter, a rising West Wing star who exited after two ex-wives came forward with allegations of spousal abuse. And they tried to clarify the reaction from Trump, who has yet to offer a sympathetic word to the women who said they had been abused.

"The president believes, as he said the other day, you have to consider all sides," said senior counselor Kellyanne Conway. "He has said this in the past about incidents that relate to him as well. At the same time, you have to look at the results. The result is that Rob Porter is no longer the staff secretary."

On Saturday, Trump tweeted that "lives are being shattered and destroyed by a mere allegation. Some are true and some are false." And the day before, he pointed to Porter's assertions of innocence and wished him a great future.

Conway also delivered what she said was a vote of confidence from Trump for chief of staff John Kelly, who has come under fire for his handling of the Porter matter. Kelly initially defended his right-hand man before later offering a version of the week's events that puzzled aides and did not line up with the White House's earlier timeline.

Budget director Mick Mulvaney, among those mentioned as a possible Kelly successor if Trump were to make a change, also downplayed the speculation about Kelly's standing, suggesting those stories "are mostly being fed by people who are unhappy that they have lost access to the president." He said talk of Kelly's departure is "much ado about nothing."

But Trump has grown frustrated with Kelly, once commended for bringing discipline to the West Wing but who recently has been at the center of his own controversies.

Trump has begun floating possible names for a future chief of staff in conversations with outside advisers, according to three people with knowledge of the conversations but not authorized to discuss them. In addition to Mulvaney, the others are House Majority Leader Kevin McCarthy, Rep. Mark Meadows and CIA Director Mike Pompeo.

Mulvaney said no one has talked to him about replacing Kelly and "I don't want that job."

There was no sign that a move was imminent, according to the people with knowledge of the conversations. Trump is known to frequently poll his advisers about the performance of senior staff and is often reluctant to actually fire aides.

Kelly has indicated he would step aside if he lost the faith of the president. But he has not offered to resign, according to a White House official who was not authorized to discuss personnel matters publicly and spoke on condition of anonymity.

But a number of West Wing aides were shaken by Kelly's handling of the Porter accusations. At a senior staff meeting on Friday, Kelly tried to push his own timeline concerning Porter. Some aides in that meeting privately questioned Kelly's account, thinking his version of events was self-serving, according to one official with knowledge of the meeting but not authorized to discuss it publicly.

Kelly has said he found out only Tuesday night that the accusations against Porter were true, but that same evening the White House released a statement of support for Porter from Kelly. The chief of staff, who has said he only learned of irregularities with Porter's background check in November, insisted that the decision for the staff secretary was made before photos of one of his ex-wives with a black eye were published.

Mulvaney, however, said Porter was "not entirely forthcoming" when asked about the allegations and, once the photos came out, "we dismissed that person immediately."

The week also cast a harsh spotlight on Hope Hicks, the White House communications director, who was dating the staff secretary. She helped craft the White House's initial supportive response and has clashed with Kelly. But several aides, including Conway, delivered ringing support for Hicks and said that the president still valued her.

As the aftershocks of the accusations against Porter reverberated for a sixth day, Trump stayed out of sight on a rainy Sunday in Washington. Showing little regard for the #MeToo movement, he has followed a pattern of giving the benefit of the doubt to powerful men and insisting upon his own innocence in the face of allegations of sexual misconduct from more than a dozen women.

"I think the president's shaped by a lot of false accusations against him in the past," said legislative director Marc Short, who added that Trump was "very disappointed" by the charges against Porter. "And I think that he believes that the resignation was appropriate."

Conway spoke on ABC's "This Week" and CNN's State of the Union," Mulvaney on "Fox News Sunday" and CBS's "Face the Nation," and Short on NBC's "Meet the Press."