Lauren Grandcolas was 38 and three months pregnant. And as Sept. 11 anniversaries pass, husband Jack says thoughts of his unborn child are difficult to set aside. Debora Villalon reports.

PEBBLE BEACH, Calif. - Twenty years later, Jack Grandcolas still remembers waking up at 7:03 that morning. He looked at the clock, then out the window where an image in the sky caught his eye — a fleeting vision that looked like an angel ascending. He didn’t know it yet, but that was the moment his life changed.

Across the country, it was 10:03 a.m. and United Flight 93 had just crashed into a Pennsylvania field.

His wife, Lauren, was not supposed to be on that flight. So when he turned on the television and saw the chilling scenes of Sept. 11, 2001, unfolding, he was not worried for her. Then he saw the blinking light on the answering machine.

Lauren had left two messages that morning, as he slept with the phone ringer off in the bedroom. First, with good news that she was taking an earlier flight from New Jersey home to San Francisco. Then she called from the plane. There was "a little problem," his wife said, but she was "comfortable for now." She did not say she would call back, Grandcolas recalls. She said: "I love you more than anything, just know that. Please tell my family I love them too. Goodbye, honey." 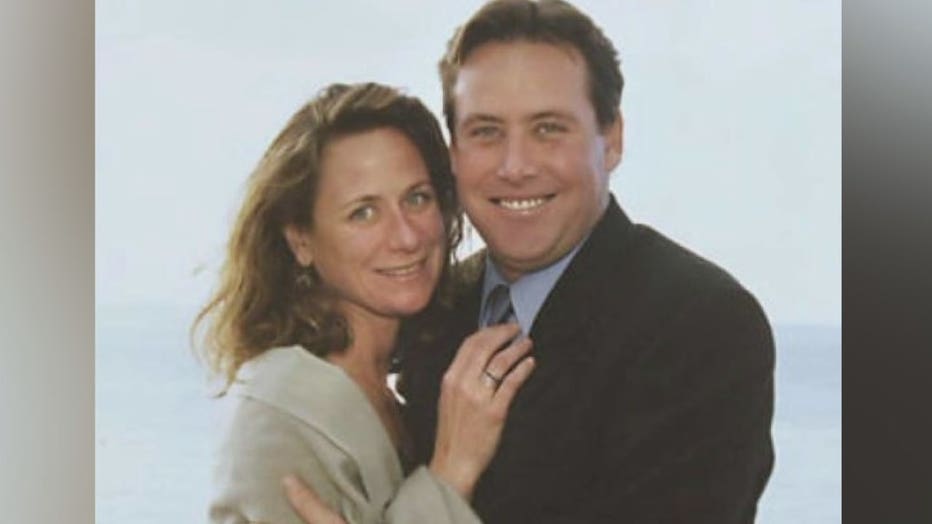 "Every year it’s a gut punch." Jack Grandcolas lost his pregnant wife, Lauren, on United Flight 93 headed to San Francisco. "We will live with the scars the rest of our lives."

"That moment I looked over at the television and there was a smoldering hole on the ground in Pennsylvania. They said it was United Flight 93," said Grandcolas, 58. "That’s when I dropped to the ground."

All 44 people on board were killed. Lauren was 38 years old and three months pregnant with their first child. She had traveled East to attend her grandmother's funeral in New Jersey, and then stayed a few extra days to announce the pregnancy — a little "good news to lift the spirits of her parents and sisters after burying their grandmother," Grandcolas said.

Flight 93 was the fourth and final plane to be highjacked on Sept. 11 by four al-Qaida terrorists on a suicide mission aimed at the Capitol in Washington, D.C. Passengers and crew members used seatback phones to call loved ones and authorities and learned of the first two attacks, on the World Trade Center in New York City and the Pentagon in Washington, D.C. Realizing their hijacking was part of a broader attack, they took a vote to fight back and try to gain control of the plane. It was a heroic act that spared countless more lives.

"What they did was amazingly dramatic," Grandcolas said. It was "a selfless act of love to conquer hate." 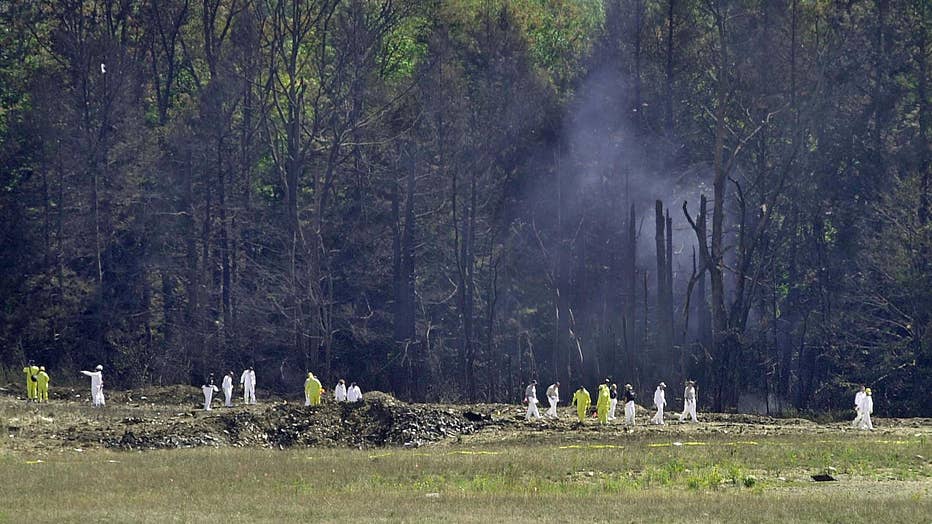 Investigative personnel search the crash site of United Airlines Flight 93 looking for debris and evidence, including the plane's flight recorder, 12 September 2001 in Shanksville, Pennsylvania. The hijacked plane crashed killing all 45 people on boa

Outlines of the plan were relayed in phone calls and captured on the cockpit voice recorder, though many families will never know the specific roles their loved ones played.

Grandcolas believes that Lauren was involved. A hard-charging advertising sales consultant with a big heart and a zest for life, Lauren was athletic and outgoing and trained as an EMT because she wanted to be able to help people in crisis situations.

"Lauren was a doer, she was not going to sit there idly," he said. He imagines her taking part in the planning of how to wrest control of the plane, gathering intelligence and knowing that time was running short. "She would have been tapping her watch to say, ‘We've got to do something fast.'"

For years, Grandcolas bristled at the term "9/11 anniversary." An anniversary is something to celebrate. But the 20th anniversary is an important one, Grandcolas said, adding that he plans to travel to Pennsylvania to visit the Flight 93 National Memorial for the first time since 2003. 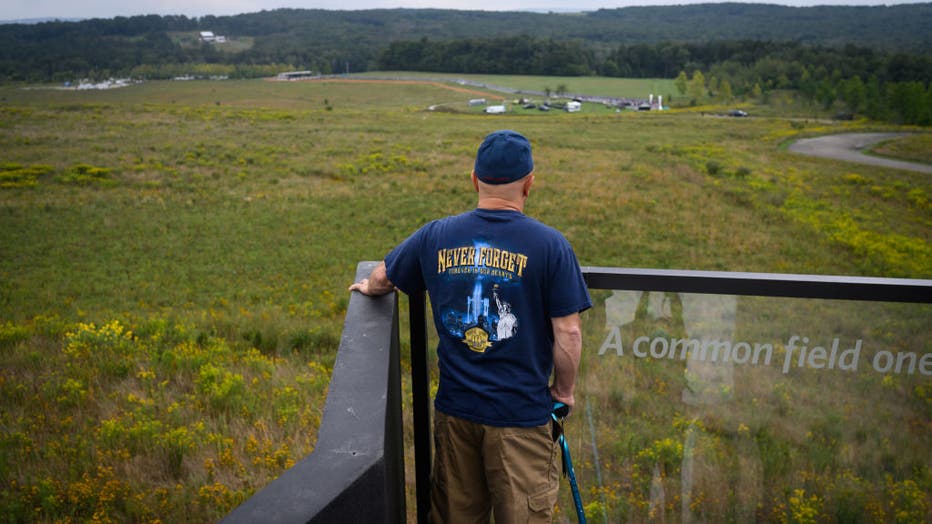 A visitor wearing a "Never Forget" shirt at the Flight 93 National Memorial in Shanksville, Pennsylvania, U.S., on Friday, Sept. 11, 2020. U.S. President Donald Trump and 2020 Democratic Presidential Nominee Joe Biden will signal on Friday that their

Grandcolas attended the first two annual memorials at the Pennsylvania crash site and then stopped, finding it too painful. Instead, in years thereafter, he would spend Sept. 11 doing things Lauren loved, like going for a bike ride or a quiet walk on the beach.

"Every year it’s a gut punch," he said in an interview near his home in Pebble Beach, Calif. "We will live with the scars the rest of our lives."

Grandcolas struggled with depression and survivor’s guilt in the aftermath of the tragedy. With the help of therapy, he came to see Lauren’s message from the plane as meant to reassure him and her family and "to let us know that she was OK with what was transpiring." That unworldly image he saw in the sky the morning of Sept. 11 took on new meaning as he healed: "It didn't dawn on me until later that the vision was Lauren." He would hear her voice in times of struggle, telling him to get up and keep living his life.

Grandcolas eventually remarried and moved out of the home he and Lauren had bought in San Rafael, California. Today, he’s semi-retired from his career as an advertising executive. He is writing a book about the grieving process that will be a tribute to his unborn child. It will be published in April, when the child would have turned 20. 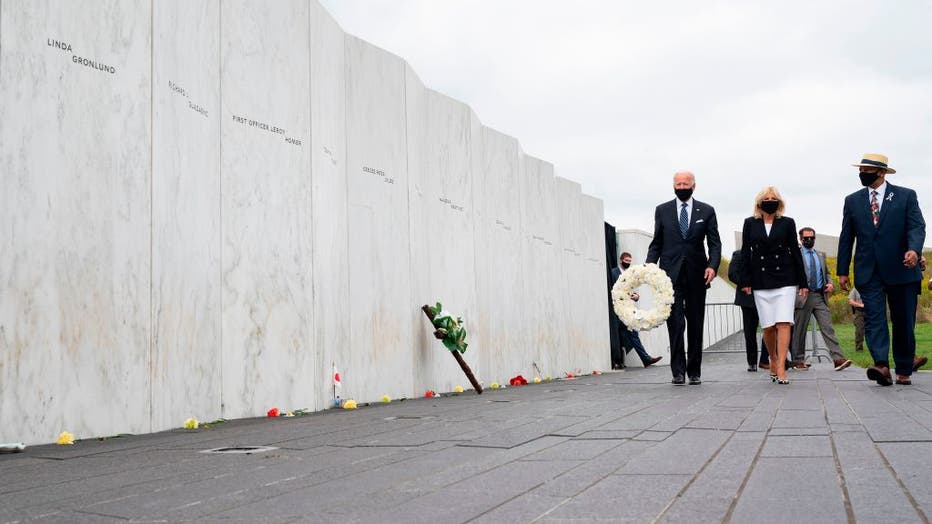 Democratic Presidential Candidate Joe Biden and his wife Jill Biden walk with Calvin Wilson as they lay a wreath at the Shanksville Flight 93 Memorial on September 11, 2020, as the US commemorates the 19th anniversary of the 9/11 attacks. (Photo by J

On the 20th anniversary, Grandcolas finds himself thinking back to how the country came together after 9/11, which he sees as a stark contrast to the division plaguing America today.

"This country was united from sea to shining sea, and today, maybe now, would be a good time to let the divisiveness drop," he said.