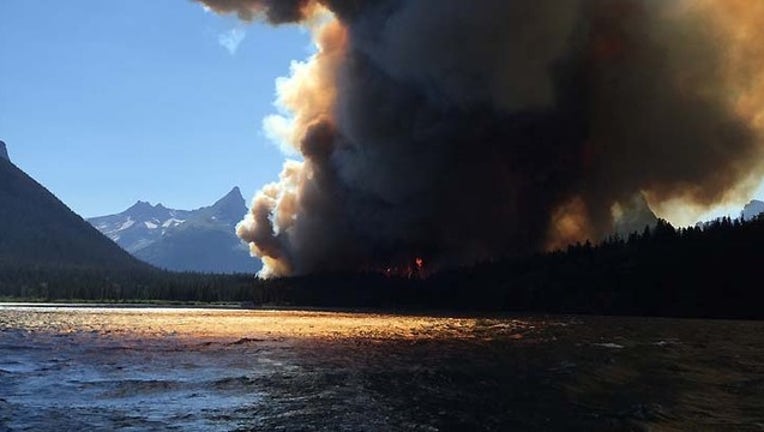 HELENA, Mont. (AP) — A wildfire driven by gusting winds swept down Glacier National Park's most popular roadway toward a small community at the park's eastern entrance, while a fast-moving Northern California blaze threatened 200 homes and ranches.

The fire burning in the drought-parched Montana park doubled in size Wednesday, leading officials to evacuate homes along St. Mary Lake and visitors to flee hotels and campgrounds in the nearby community at Glacier's eastern entrance.

The National Weather Service on Thursday warned that 20-30 mph wind gusts and low humidity could cause the wildfire to quickly spread.

"We're kind of in the direct line right now," said Susan Brooke, who owns the St. Mary Glacier Park KOA. "It's raging down the ridge toward St. Mary."

Brooke said 688 people were in the campground when the fire ignited Tuesday afternoon about 6 miles east of Logan Pass. Word of the fire began to circulate and soon the plume of smoke could be seen in the distance.

"People started to panic and started leaving immediately," she said.

Nearly all of the campers cleared out by midafternoon Wednesday, only to be replaced by fire officials and law enforcement using the grounds as a staging area with the fire just over the ridge a few miles away.

Additional firefighters, helicopters and fire engines were arriving as the blaze spread, though crews have been hampered by wind and extreme fire behavior, park spokeswoman Denise Germann said.

By Wednesday evening, the fire had burned more than 6 square miles. It also destroyed the Baring Creek Cabin, a historic backcountry structure.

The scenic Going-to-the-Sun Road, which is the main alpine roadway that bisects the park, was closed for 21 of its 50 miles. Park officials shuttled visitors to safety and scoured the backcountry for hikers in the fire zone.

Several backpackers were found and were to be taken out of danger.

Peak tourist season is underway, and 95 percent of park visitors travel some length of the Going-to-the-Sun Road, which bisects the park and hugs the mountainsides to cross the Continental Divide.

To the west, a fast-moving wildfire covered more than 9 square miles of countryside near Northern California's Lake Berryessa by Thursday morning.

The fire is 5 percent contained and is threatening some 200 homes and rural ranches. The communities of Quail Ridge and Golden Bear and two campgrounds are under evacuation orders.

The California Department of Forestry and Fire Protection said there was no immediate word on the total number of evacuees. Calfire said early Thursday morning that it had no reports of injuries or damage.

The dangerous fire weather extended to Washington state, which is also struggling with drought. More than 1,000 firefighters on the ground and in the air attacked a wildfire that has burned one home and more than 8 1/2 square miles of land in the southeastern part of the state near Walla Walla. It was human-caused and is under investigation, officials said.

In central Montana, Helena National Forest officials reduced the estimated size of a fire about 15 miles east of Townsend to 2 1/2 square miles due to better mapping. Broadwater County Sheriff's officials lifted an evacuation order for about 40 homes in the rural area.

In the Glacier blaze, one family from Missouri nearly found themselves trapped when they briefly stopped to record video of the fire.

"It was smoldering and smoking just like a normal fire," Lakota Duncan said. "As soon as we started driving, it just exploded. That's the best I can say."

Duncan's father began driving at high speed as the flames drew nearer, while Duncan yelled, "Go, Dad, Go," from the back seat and continued to record as they made their escape.