The weekend's winter storm that dropped over a foot of snow across the South and Mid-Atlantic states is charging north up the eastern seaboard. Areas near the coast are seeing all rain while snow continues to pile up across the interior.

Areas along Lake Eerie could potentially see up to two feet of snow through Wednesday, including Cleveland, Ohio and Buffalo, New York. Lake-effect snow beginning Monday night into Tuesday will continue to drive up those snow totals for areas near Rochester, New York, according to the National Weather Service in Buffalo. 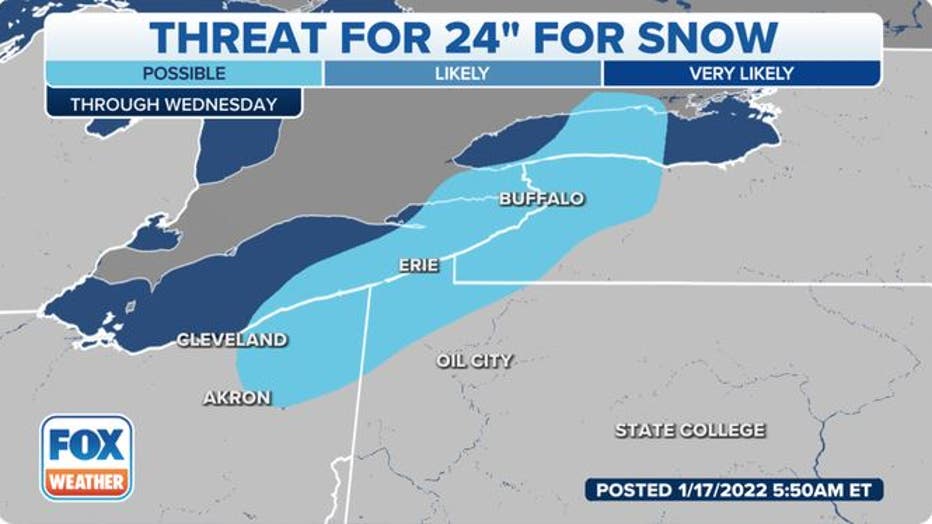 24 inches of snow is possible.(FOX Weather)

Washington, Philadelphia and New York City will dry out Monday morning, but winds will be brisk at 20-40 mph.

According to the National Weather Service in New York, southeast winds between 35 and 45 mph with gusts up to 65 mph are possible in southern New London County, Connecticut and southeast Suffolk and northeast Suffolk counties in New York. 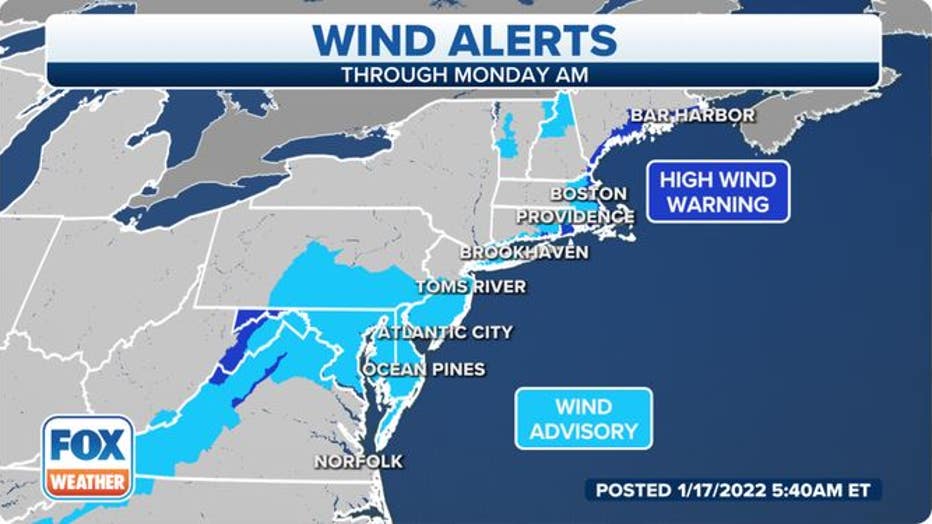 Wind alerts for the Northeast though Monday. (FOX Weather)

Massachusetts and Connecticut will wake up to a rainy Monday morning with winds gusting up to 60 mph. 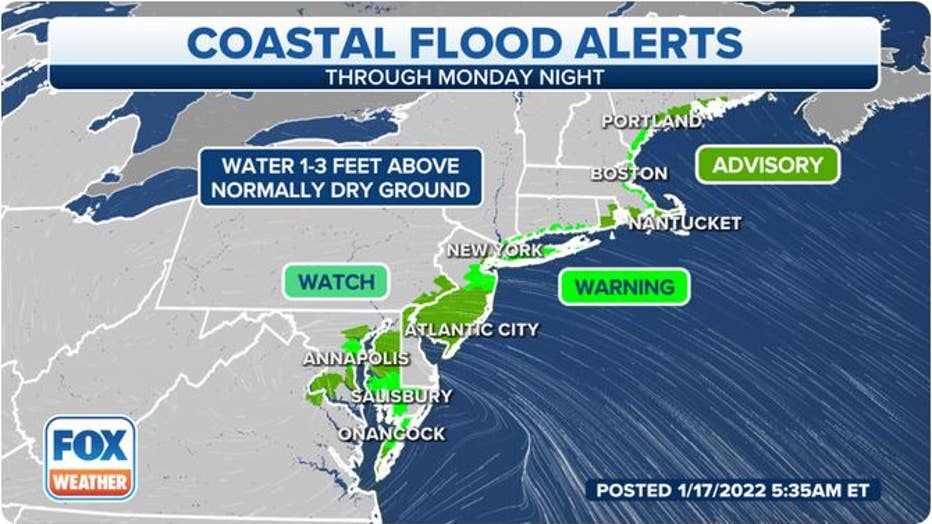 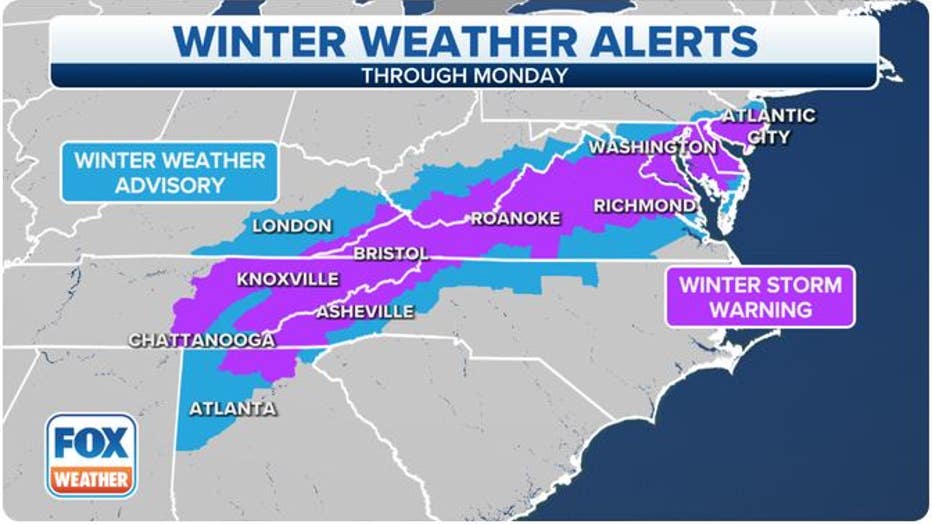 Monday morning commuters could face dangerous conditions across the mid-Atlantic where ice glaze may cover the roads after a night of freezing rain. 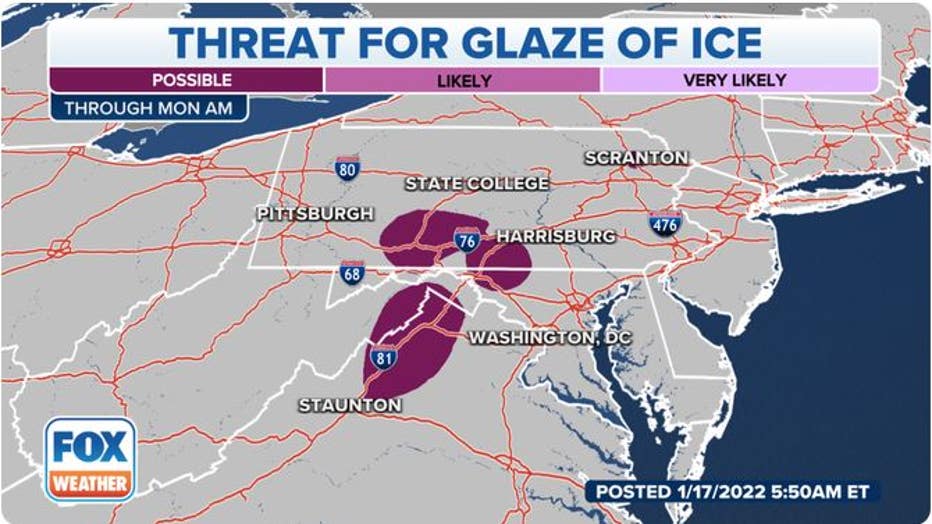 States across the South and Mid-South that received weekend snow could experience freezing roadways overnight. Georgia's Emergency Managers ask residents to stay off the roads Monday morning if possible.

A winter storm warning was in place for areas in northwest Georgia on Sunday, January 16, as the National Weather Service (NWS) warned of snow accumulations, strong wind and black ice in some parts. (Credit: Walker County, Georgia Government via Storyful)

Widespread ice and frozen slush should be expected Monday morning, according to the NWS in Atlanta, and could continue through the middle of the week.

Ice glaze, wind gusts as high as 40 mph across higher elevations can be expected in upstate South Carolina, northeast Georgia and western North Carolina, according to the NWS. 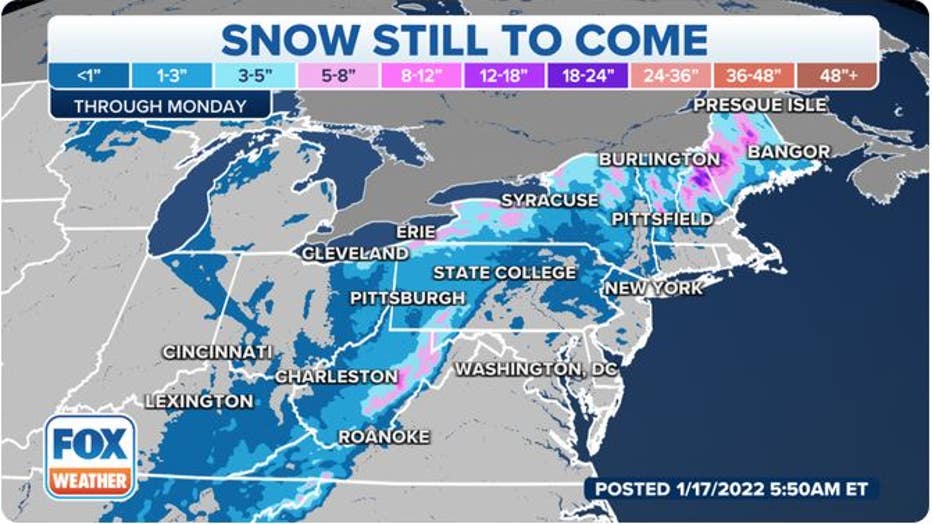 Snow still to come from the winter storm impacting the Northeast.(FOX Weather)

Sunday recorded record snowfall for the day for both Asheville, North Carolina (10 inches) and the Greenville-Spartanburg Airport, South Carolina (6.1 inches).

More snow and ice totals from the weekend:

More than 200,000 homes and businesses are still without power with a majority of the outages in North and South Carolina as of Monday morning, according to PowerOutage.us. Outages in New York, Connecticut, West Virginia and Pennsylvania are also being reported in the thousands.

Hazardous road conditions are delaying repairs, according to Duke Energy. As conditions improve later Monday the company said most customers should be restored by the end of the day in South and North Carolina.