A woman suffered serious injuries after following her dog into a hot spring.

Officials at Yellowstone National Park are warning visitors to keep their pets under control while visiting the park, especially near the famous hot springs. According to the park, a woman was seriously burned after entering a spring that had temperatures around 200 degrees Fahrenheit.

The victim had been chasing her pet dog, who had run into the Maiden’s Grave Thermal Spring. In a press release from the national park, officials stated that the 20-year-old woman suffered "significant thermal burns" between her shoulders and feet on Oct. 4.

The young woman had been visiting the park with her father and had driven to an area near Fountain Flat Drive, south of Madison Junction. When the pair exited their vehicle, the woman’s pet dog jumped out and ran into the thermal spring. 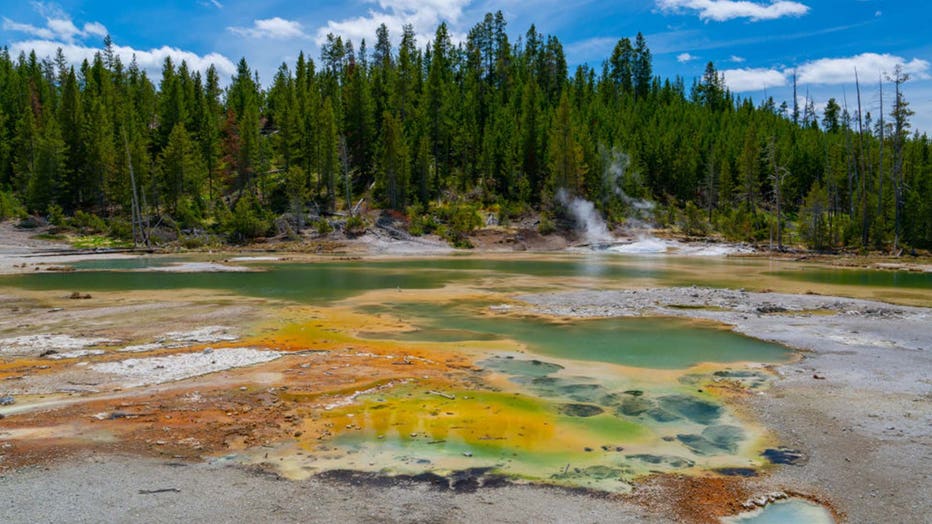 FILE - General views of Crackling Lake in the Norris Geyser Basin at Yellowstone National Park on May 27, 2021.

RELATED: Woman sentenced to jail, fined for walking on thermal ground at Yellowstone

The woman’s father pulled her out of the hot spring and took her to get medical care. Yellowstone National Park rangers and first responders initially provided care before she was transported to Eastern Idaho’s Regional Medical Center’s Burn Center.

While the dog was removed from the thermal spring, Yellowstone officials have confirmed that it died.

Officials took the opportunity to remind guests that pets need to be physically controlled at all times while in the park. This means they either need to be in a crate or kept on a short leash.

Guests were also reminded that the ground near thermal springs is "fragile and thin," and that they need to remain on boardwalks and trails. There is scalding hot water just below the surface and guests in these areas need to exercise "extreme caution."